As a result of its financial crisis, Hamas adopted policies that are increasing Gazans' suffering and dissatisfaction. 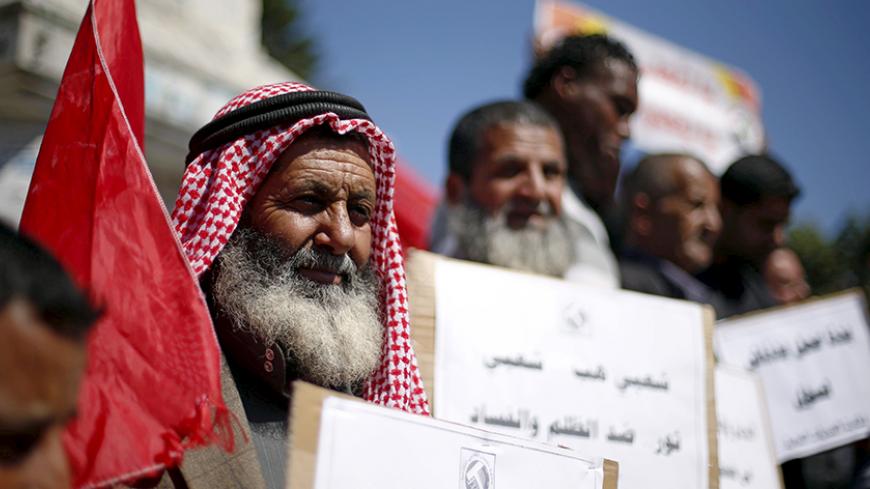 Hamas' Band-Aid budget approach can't be expected to stem its fiscal seepage for long, and taxpayers are being drained.

The financial crisis that has plagued Hamas for several years is weighing heavily on Palestinians in the Gaza Strip, as Egypt in 2013 began closing the tunnels between Gaza and the Sinai Peninsula, which served as a major source of income for Hamas. The closures coincided with the gradual halt of Iran’s support to the movement following their differences over Syria, and with the halt of international aid convoys, which were accompanied by financial support for Gaza.

“Hamas' financial policy in Gaza in recent years has had its pros and cons. Hamas has managed to adapt in relative terms to the blockade on Gaza by taking belt-tightening measures in its ministries and government departments," Omar Shaaban, a Palestinian economist and general director of PalThink for Strategic Studies, told Al-Monitor. "However, the movement erred by imposing more taxes, which has weakened the economic cycle in the Gaza Strip, causing a market recession. This has reflected Hamas’ short-sightedness, as it thought that by increasing taxes it would increase its financial resources. Yet, all it has done is push traders to disengage from the economic process.”

In light of the financial crisis, Hamas has failed to pay the salaries of its employees on a regular basis. Services provided to Gazans have declined, power cuts have increased and people's dissatisfaction with the government’s performance has mounted.

“Hamas has been employing a financial policy in Gaza in light of an unstable political situation, with the Ministry of Finance spending most of its resources on salaries of employees, who number 43,000. The salaries amount to 145 million shekels per month [about $38.5 million]. The rest of the revenues, amounting to 13 million shekels, are allocated to the operating expenses of the ministries," Khalil Shaqfa, general director of the public budget in the Ministry of Finance in Gaza, told Al-Monitor.

One can say that Hamas’ fiscal policies have gone through three stages. From 2007 to 2011, the movement experienced financial prosperity with the influx of foreign aid and the funds brought in by Hamas officials and ministers after their visits abroad. Also, the tunnel works between Gaza and Egypt had expanded, allowing the entry of plenty of commercial goods with a profit of $365 million annually, covering more than 70% of Hamas' monthly budget.

From 2012 to 2013, Hamas suffered a financial setback when Egypt completely closed the tunnels, restricting the movement of Hamas officials abroad, given the closure of the Rafah crossing.

From mid-2014 until today, Gaza’s financial performance has been gradually declining, following the announcement of the consensus government in June 2014 and the unification of sources of income, outputs, expenses and expenditures under the banner of the Ministry of Finance in Ramallah.

Lawyer Bakr al-Turkmani, legal adviser to the Coalition for Accountability and Integrity (AMAN), told Al-Monitor. “The security sector is the main problem of public spending in Gaza, coupled with a decline in the economic and developmental domains spending. This is not to mention the [public] salaries in Gaza, which constitute 80% of the expenses [in 2014], and must be covered by domestic revenues." The report said that percentage grew to 90% post-2014.

Turkmani added, "This is negatively affecting the work of the ministries concerned about operational expenses and the lack of allocations to development, compounded by the double taxation weighing heavily on Gazans. A detailed report on the reality of income and expenditure in the Gaza Strip, which was issued by AMAN, said that taxes [levied by the Finance Ministry] amounted to $85 million by the end of 2014.” That figure does not include taxes imposed by the National Conciliatory Government; thus, the double taxation.

Hamas could defend its decision to increase taxes by saying that it was a compelling step under the blockade. Yet it seems that the movement did not consult enough with the local community, which does not approve of Hamas' economic decisions.

There are doubts that Hamas' fiscal policy will prove viable in the future, as Palestinians are growing tired of bearing the consequences of such a policy and are running short of savings. This is not to mention that many development and investment projects have closed down, which makes it imperative for Hamas to search for new solutions.

“Between 2008 and 2014, Hamas supported the Gaza government with its own funds, amounting to about $1 billion, which means that it had effectively assumed its responsibility in the government," Jamal Nassar, head of the Budget Committee in the Palestinian Legislative Council, told Al-Monitor. "Ministries in Gaza imposed taxation as per the law. Taxpayers ostensibly number 55,000, but only 5,000 are effectively paying taxes. With the collected tax revenues, the Ministry of Finance [was] able to disburse 45% of [February's] public salaries and some operational expenses for certain ministries."

Nasr Abdel Karim, an economics professor at Birzeit University in the West Bank, told Al-Monitor, “Hamas is not following a specific fiscal policy in Gaza. Rather, it is improvising its financial management on a daily basis, as it is suffering from the blockade and successive economic crises. Thus, Hamas is relying on undeclared resources from its regulatory budget. Palestinians, despite their dire economic conditions, believe that Hamas’ economic failure is the outcome of the blockade and its inability to overcome it.”

Given the absence of any rapprochement between Hamas and Iran, Egypt's tunnel closings, the far-fetched reconciliation with Fatah and the burden of the salaries of Gaza employees, it seems that Hamas' financial crisis is very likely to persist.