Hamas budget shows another tough year ahead for Gaza

The Hamas government budget for 2014 is full of ambitious targets that most likely will not be met because of the current crisis and blockade. 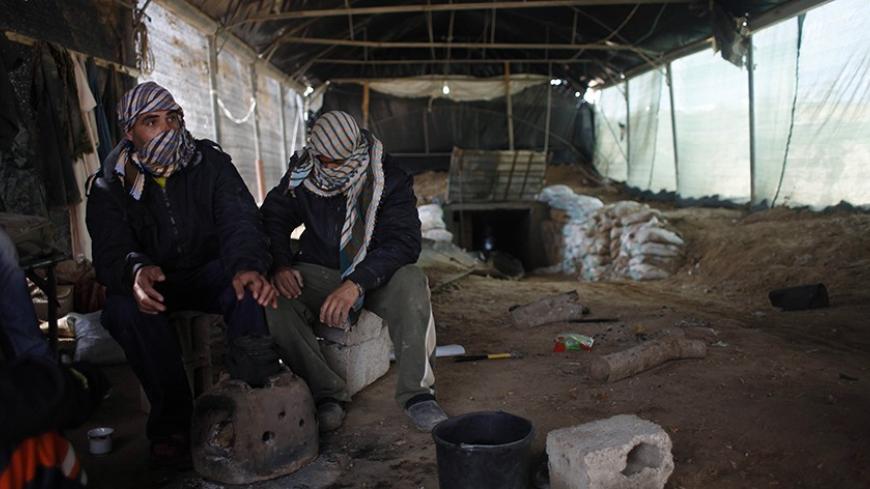 Tunnel workers sit outside a smuggling tunnel on the border between Egypt and the southern Gaza Strip, Feb. 17, 2014. - REUTERS/Ibraheem Abu Mustafa

The Hamas government’s budget for 2014 of nearly $900 million, ratified by the Legislative Council on Dec. 31, will struggle to meet its targets. While preparing and ratifying the budget is one matter, implementing it and reaching the set revenues is another task altogether.

Meeting the budget is nearly an impossible mission in light of the circumstances that can easily be described as harsh, most notably because of the significant decline in tax revenues from incoming goods from Egypt because of the closure of the tunnels and the severe recession experienced by Gaza’s economy. This is in addition to the tightening of the Israeli siege after Israel uncovered the Ein Hashlosha tunnel on its border last October, and the worsening UNRWA financial crisis. The Hamas government, the Hamas movement and the Gaza Strip are experiencing difficult circumstances. How will Hamas be able to confront these conditions, given that they are the worst in decades?

Article 1 of Law No. 7 (1998) defines the budget as a detailed program for the spending and revenues of the Palestinian National Authority for a given fiscal year. It includes revenues, grants, loans and other receipts, in exchange for expenses and various payments.

The Legislative Council and the Reform and Change Bloc ratified the 2014 draft budget with some modifications, as revealed later in this report.

Al-Monitor spoke with budget officials who oversaw its preparation. “The concept of security and public order is extended to other sectors such as local government and the religious judiciary. It is known that the security and public order sector does not include the military wing of the Hamas government — i.e., the Izz ad-Din Qassam Brigades — which is financially and administratively separate from the Hamas government,” one official noted.

Operating expenses: these include amounts allocated to cover the operating expenses of the ministries and other government institutions such as water, electricity, mail, stationery and foreign missions.

Why are the expenses overestimated, given that the actual expenses for the past two years have not exceeded 41% of what was estimated? In answering that question, one official responsible for preparing the budget in the Ministry of Finance told Al-Monitor, “The government included all the plans intended to be implemented in the hope that the necessary resources become available.” He added that it is better to include them in the budget and not implement them than not include them and have the resources become available.

Wages and salaries: They are a large share (57%) of general expenses. This includes salaries, $400 million a year or some $33 million a month; new appointments, $4 million; and arrears, $105 million. The arrears indicate that the Hamas government’s 51,000 employees have not been paid for the past four months. During this period, the employees only received two payments each equal to half a month’s salary.

The 2014 budget law could not have been passed without the financial crisis having a direct and significant impact on it. The committee ratified the 2014 budget and reduced the terms of expenses and new appointments by 30%. Nevertheless, implementing it as planned will be a difficult task to accomplish, especially in light of the restraints, the unprecedented financial crisis facing Hamas and with the lack of any indicators of a breakthrough with Egypt in regard to Israel’s blockade. Hamas’ government is likely to end the contracts of many of its employees so as to cope with the crisis. It might also impose new taxes on private or public institutions and/or liquidate some properties. This will have adverse consequences with low yield. All indicators show it will be another tough year for the Gaza Strip.