As political rifts persist among the leaders of the Palestinian Authority, the 2013 budget has been passed with promises of donations from the EU, the US and Arab donors, writes Omar Shaban. 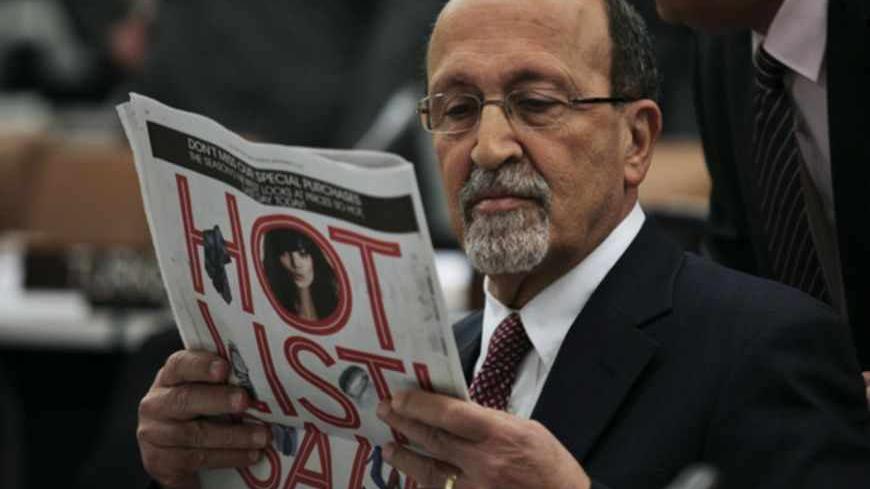 Palestinian Finance Minister Nabil Kassis reads a local newspaper as he waits for the start of the Ad Hoc Liaison Committee meeting, the donor support group for Palestine, at the United Nations in New York, Sept. 23, 2012. - REUTERS/Eduardo Munoz

Usually, the preparation and ratification of the Palestinian Authority’s (PA) budget is accompanied by a great deal of domestic and international anticipation due to the ongoing financial crisis plaguing the authority. This crisis has negatively affected the PA's popularity within Palestinian society, just as it reflects the balance of power within the Palestinian community between large companies, unions and civil society organizations. It acts as a litmus test for the PA's relationship with Israel. This time, however, the ratification came under different circumstances.

The approval of the 2013 budget came under new and old political and financial conditions. The PA has been reeling under the pressure of a persistent financial crisis for years, a crisis that has intensified in the past year, prompting violent demonstrations in the West Bank. These demonstrations have called for lowering taxes and combating the high cost of living, while some have even been calling for the dismissal of the government of Salam Fayyad.

Moreover, the ratification of the budget comes amid sharp differences between President Mahmoud Abbas and Prime Minister Fayyad following the resignation of the finance minister, Dr. Nabil Kassis, on March 9. The resignation was quickly accepted by Fayyad without consulting Abbas, who was at the time in the Kingdom of Saudi Arabia. For his part, President Abbas asked Kassis to return to his post, which further strained the relationship between the two heads of the PA.

In this context, the events brought good news for Fayyad. In a meeting held on March 19 in Brussels, the Ad Hoc Liaison Committee (AHLC) of the donor countries to the PA adopted the commitment to offer $1.2 billion in 2013. Catherine Ashton, the European Union’s foreign policy coordinator, pledged that the EU would continue to pay $389 million, in addition to around $32 million, in direct support for the budget. Thus, Fayyad returned from Brussels to Ramallah satisfied with what he achieved, after having previously been angry because of tensions with President Abbas.

Since good news comes all at once sometimes, US President Barack Obama announced while he was in Ramallah that the US administration will release aid worth $500 million, which the US Congress had previously frozen as punishment for the PA’s bid for statehood at the UN last November. Of this, $170 million will be allocated in direct support of the budget. This direct support enables the government to pay staff salaries and operating expenses. In the absence of this support, these expenses would cause more than a few headaches for the prime minister.

This good bit of news prompted Fayyad to announce that his government would be able to pay all salaries on time in the coming months. The budget was approved under tense internal conditions and in light of international pledges to support it. Fayyad succeeded in his foreign battle, and he will most likely use it to confirm his position within the political system and counter his declining popularity due to the financial crisis. He will most likely use it to refute various criticisms and calls to sack his government and replace him.

The steady rise in public revenue is attributed to the significant improvement in the methods of collection and the fight against the smuggling of goods from Israel to the Palestinian territories. Meanwhile, however, this was one of the reasons behind the demonstrations that swept across the territory of the PA in the past years.

According to the 2013 budget, total public expenditure will reach $3.538 billion, of which $1.880 billion are allocated for salaries; i.e., 53% of the total expenditures, while the other current expenditures were allocated $1.577 million; i.e., 45%. The 2013 budget anticipates a wage increase of $111 million and an increase in current operational expenditure worth $94 million. The budget statement does not include details about the exchange-rate items under this title, despite their importance. Moreover, it does not address the number and type of new employees at a time in which the government is struggling to pay the salaries of its 160,000 employees.

The trade deficit amounts to $1.05 billion, not including the cost of the development projects. This deficit rises to $1.4 billion after adding the $350 million dedicated for development projects. The same amount was allocated to this item in last year's budget. The budget proposes that the total deficit of $1.4 billion be covered with Arab and international support. European support is consistent and can be relied upon, whereas US and Arab support is irregular and heavily influenced by politics.

Budget with some reforms:

The budget bill and the budget itself include new texts that clearly reflect financial and administrative reform. Some of these texts deal with the criticism previously directed at the government. This shows that the Fayyad government and his resigned finance minister have taken into consideration the pulse of the street in the preparation of the budget. The following are some of these texts:

1. They should not resort to borrowing from the insurance and pension fund or from the Palestinian Monetary Authority (PMA) in order to implement the budget articles, or from banks unless to cover the financing gap, on condition that the debt balance at the end of 2013 not exceed that of the year 2012.

It is known that the Palestinian government has resorted to borrowing from the employee pension and insurance fund to face the financial crisis resulting from the delayed arrival of international aid. The volume of government debt to the insurance and pension fund is more than $1.5 billion, in addition to $2 billion worth of debts owed to the private sector and Palestinian banks.

2. The Palestinian government has contracts with consultants to perform tasks that require unavailable skills in the government apparatus, amounting to about 1,200 consultancy contracts until 2011, some bonuses of which reached $10,000 per month.

3. The budget statement includes clear instructions to organize the exchange process, and determine a unified treasury account in which to deposit all revenues and grants. It is also prohibited from opening sub-accounts without written approval from the Minister of Finance, and cannot award any tender or implement any purchases without the availability of financial allocations.

Political dimensions of the budget

The government's success in the face of the financial crisis remains subject to the consent of donors and more importantly, to winning the interior battle on three fronts: the presidency, political forces and the Palestinian public most of all. Fayyad will realize that the battle to ensure Western funding is much easier than waiting on these three fronts. For President Abbas will not succumb to Fayyad and accept the resignation of the finance minister. News reports have confirmed that Abbas insists on the return of the resigned finance minister, even if the price of that involves sacrificing Fayyad himself. This could then open the door for a battle between the PA and Western donors, who trust Fayyad to manage aid given to the PA. It appears that the 2013 budget wasn’t just numbers, but served as a fig leaf to cover up serious political rifts.