Can Palestinian Authority cope with decline of international aid?

International aid to the Palestinian Authority fell by 70% over the last four years, significantly affecting the Palestinian government's budget, and consequently, the economy. 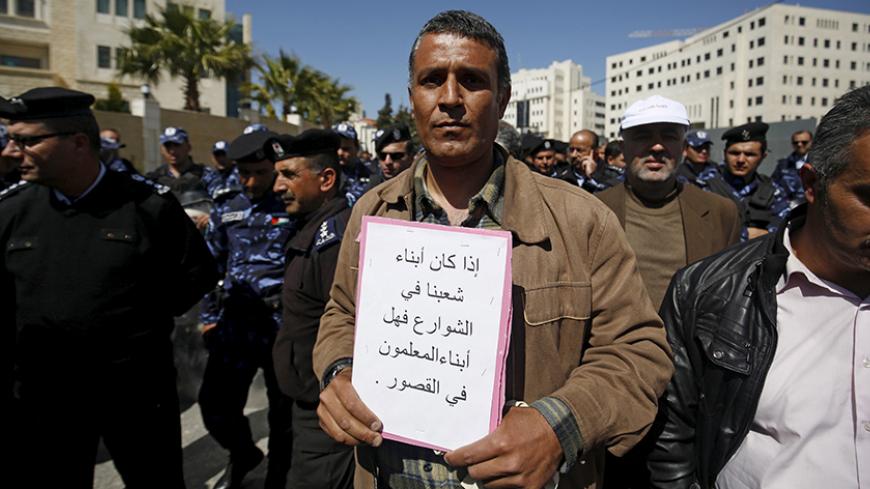 RAMALLAH, West Bank — By the end of August, international financial aid to the Palestinian government registered an unprecedented decline, Palestinian Prime Minister Rami Hamdallah said during an interview Aug. 27 on Maan TV. He said financial aid dropped by 70% over the last four years, and had fallen to $350 million between January and August of this year. On Sept. 7, Palestinian Finance Minister Shukri Bishara said that the overall foreign financial aid this year had risen to $400 million.

After the Palestinian Authority (PA) was established in 1994 following the 1993 Oslo Accord, the international community pledged to provide financial support worth $1.2 billion to $1.5 billion a year. Hamdallah said the donor countries generally met their pledges until 2012, after which the budget support started declining until it fell to $750 million in 2015, according to Palestinian Ministry of Finance figures.

The Palestinian general and development budget for 2016 amounted to $4.251 billion, of which $750 million was to be received through foreign financial assistance and dedicated to the operating budget and $245 million for the development budget, which mainly focuses on the development of centers for education, health and social affairs. The budget expenses are stated in the General Budget Control and Financial Affairs Law No. 7 of 1998. However, only $400 million was received as part of the 2016 budget.

The financing gap — expenses without financial cover — in the budget, which was approved by President Mahmoud Abbas on Jan. 9, has reached $387 million, but it is expected to widen should foreign aid remain lower than in the budget.

In the same interview, Hamdallah said, “There is a financial blockade on Palestine because of its political stance. The United States was paying $1 billion per year when the PA was first established. It only paid $250 million in 2015 for projects and institutions, not in cash to the public treasury, while we did not receive a single dollar from the US government this year.” The United States could still decide to give the PA financial aid before the year ends.

Hamdallah added, “The United Arab Emirates did not pay a single dirham between 2013 and 2016. It did not fulfill its obligation, when it pledged during the Cairo donor conference held on Oct. 12, 2014, to pay $200 million for the reconstruction of the Gaza Strip. For its part, Qatar paid $150 million to the Palestinian treasury in 2013 in three installments, but not a single dirham between 2014 and 2016. However, Qatar is also directly carrying out projects in Gaza,” such as the housing project named Hamad Town, infrastructure development projects and most recently the paying of one month of salaries to Gaza’s government employees.

On Sept. 7, Bishara presided over a meeting in Ramallah for the Ad Hoc Liaison Committee (AHLC) donor coordination group for the Palestinian people, with the participation of International Monetary Fund (IMF) representative Ragnar Gudmundsson, World Bank representative Marina Wes, Norway's envoy for the Middle East Peace Process Tor Wennesland and representatives of the US, Swedish and Belgian consulates. During the meeting, Bishara said, “Should donor countries and regional countries fail to fulfill their obligations in terms of budget support, the financing gap will rise to more than $650 million by the end of 2016.”

Mohammad Shtayyeh, the head of the Palestinian Economic Council for Development and Reconstruction, told Al-Monitor that the AHLC is scheduled to hold meetings in New York on Sept. 18-19, on the sidelines of the United Nations General Assembly meetings. During the meetings, the World Bank, the IMF and the Palestinian Finance Ministry are expected to submit a report on the Palestinian economic situation, the accumulated deficit in the treasury and the PA’s financial needs.

“The main reason behind the decline in financial aid is the stalled Israeli-Palestinian political process, since the aim of that money is to help reach a political agreement,” Shtayyeh said. “The donor funds are allocated to secure the government employees' salaries; thus the decline of external support would negatively affect the PA as it is struggling every month to cover their salaries. The government would also be unable to spend on some sectors and development projects, and settle its debts to the private sector, which will suffer a decline, consequently affecting investments.”

Back in 2010, the Arab states had approved at the Arab summit held in Kuwait a financial safety net worth $100 million to assist the PA financially, but that decision remained on paper and was not implemented.

In this regard, Shtayyeh said, “The Arab safety net has never been implemented on the ground and it seems to be a mere political slogan that did not come into effect and was not actually implemented into something reliable.”

Although the Palestinian government has increased its shares in clearance revenues from Israel from 350 million shekels to 600 million shekels per month ($93 million to $160 million), this does not seem enough to counterbalance the declining international support.

Nasr Abdul Kareem, a professor of economics at Birzeit University, told Al-Monitor that the decline in international support will cause an increase in the financing gap that will eventually turn into public debt, private sector arrears or bank debt.

Abdul Kareem said, “The government has very limited options. The easiest and least expensive option is expenditure rationalization and government austerity, according to a programmed policy. The government could work to improve tax collection and fight tax evasion, while the PA could pressure Arab countries to activate the Arab safety net.”

Palestinian government spokesman Youssef Mahmoud told Al-Monitor, “The Palestinian government is keeping communication channels open with Arab and friendly countries to overcome the declining international aid,” noting that Palestine is being financially pressured by certain countries for its political positions, in reference to stalling negotiations with Israel and joining international treaties.