The Palestinian reconciliation will require a substantial increase in the PA budget, including new hires for security and resolving the ongoing crisis involving civil servants appointed by Hamas. 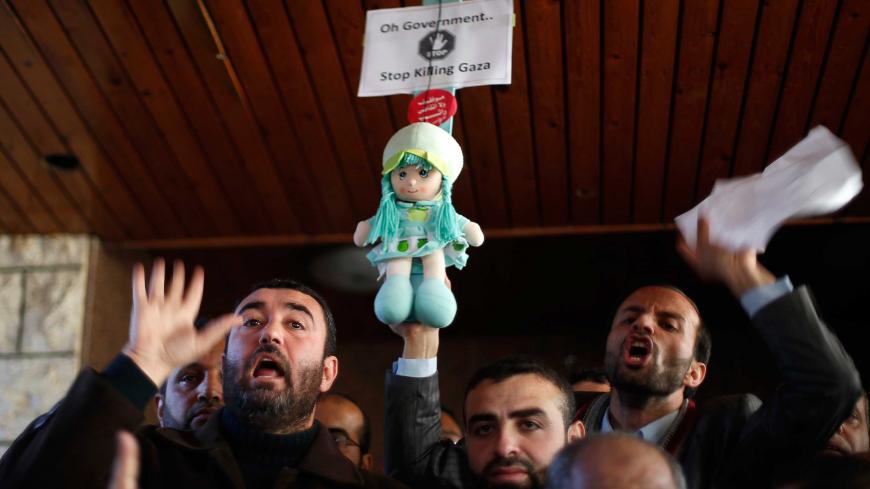 Palestinian Hamas-hired employees shout slogans after breaking past the gate of the Palestinian Cabinet headquarters to demand their pay, in Gaza City, Gaza Strip, Jan. 13, 2015.

RAMALLAH, West Bank — Reconciliation between Fatah and Hamas is expected to take its toll on the Palestinian Authority's (PA) general budget for 2018, which the government will begin drafting by the end of October, a Palestinian official told Al-Monitor.

“Reconciliation — if successful — will make the next budget the largest in the history of the PA, with a possible 20% to 30% increase,” said the official, who spoke on condition of anonymity.

The issue of Gaza’s employees will pose the biggest financial challenge to the 2018 budget, with the payroll bill accounting for more than half of it. The 2017 budget allocated about $2.25 billion to salaries of current civil servants, amounting to 54% of total expenditure.

About 40,000-50,000 employees appointed by Hamas after its takeover of the Gaza Strip in 2007 await their fate, as Palestinian Prime Minister Rami Hamdallah announced Oct. 4 that a legal administrative committee has been formed to discuss employee affairs and submit its recommendations within four months. This means that the budget will incur additional expenses, whether employees are listed on the government payroll or whether an agreement is reached to end their service and provide financial compensation.

The financial data of the Palestinian government indicate that it cannot afford to cover the salaries of Hamas’ employees, which could amount to $600 million a year. Hamdallah pointed to this issue in a TV interview with Egypt's Extra News channel Oct. 4, saying, “We cannot — as a Palestinian government — bear the burden of having to pay 50,000 employees, whose salaries are no less than $50 million per month. This is why I hope that after our meetings in Cairo, the legal administrative committee can find suitable solutions for old and new employees.”

Samir Abdullah, the director of research at the Palestine Economic Policy Research Institute-MAS, told Al-Monitor, “We expect at least a 30% increase in current expenditures in the next budget to cover the costs of the absorption of new employees, and the recruitment of new security cadres in Gaza and new crews at border crossings, in addition to the accommodation of Hamas’ employees.”

Speaking about the revenues to enter the PA’s treasury from Gaza, Abdullah said, “The Gaza Strip has been devastated by the siege. The three wars against Gaza in 2008, 2012 and 2014 have destroyed infrastructure and completely wrecked the economic sector. It is therefore difficult to reap revenues and taxes from Gaza, as the economy needs to recover first. The Gaza Strip needs four years to recover economically, after which it could contribute again to 30% of the total revenues of the PA’s budget.”

On Oct. 4, Hamdallah said in a meeting with businessmen in the Gaza Strip, “Foreign aid has fallen by more than 70%. A number of countries have relinquished their commitments to fund the reconstruction and only 35.5% of the [promised] aid actually reached Gaza,” without specifying which countries.

In this context, Nasr Abdel Karim, a professor of economics at Birzeit University in the West Bank, told Al-Monitor that the development expenditures will suffer a huge inflation in the next budget, but the government's ability to secure it depends on donor funding for projects expected to be implemented in 2018.

Abdel Karim noted that the current expenditures will increase by about $600 million-$700 million to address the issue of employees in the Gaza Strip and lift the measures imposed by the PA on Gaza’s employees, thus increasing development expenditures, all of which will deepen the budget deficit.

The budget must also answer to Gaza’s need to solve the issues of electricity, water and sanitation, and create employment programs for the youth. The unemployment rate in Gaza reached 41.1% by March 2017, according to the Palestinian Central Bureau of Statistics.

An Oct. 20 report by the Popular Committee Against the Siege revealed the tragic reality of Gaza’s humanitarian and economic situation. It showed that 80% of the population lives below the poverty line, the per capita income is $2 a day, 95% of water is unfit for drinking, 80% of factories are closed in whole or in part, the proportion of exports to imports stands at 0.62%, and the annual direct and indirect economic losses amount to $250 million.

The government is making efforts to prepare an unprecedented budget in the history of the PA. It is particularly going the extra mile due to the decline in foreign grants, whose contribution to the budget amounted to only 38% in 2015 and 2016, according to a Sept. 12 report by the United Nations Conference on Trade and Development.

However, the government will seek to benefit from the resumption of collection of tax revenues and customs fees from the Gaza Strip as a way to provide money, albeit a small sum. It will also work on bringing in financial aid from Arab countries, particularly the Gulf countries, to support their ally Egypt, which pledged to sponsor and achieve reconciliation by all means.