The Palestinian national reconciliation government is suffering from a deficit that poses a challenge to the payment of the salaries of Gaza's government workers. 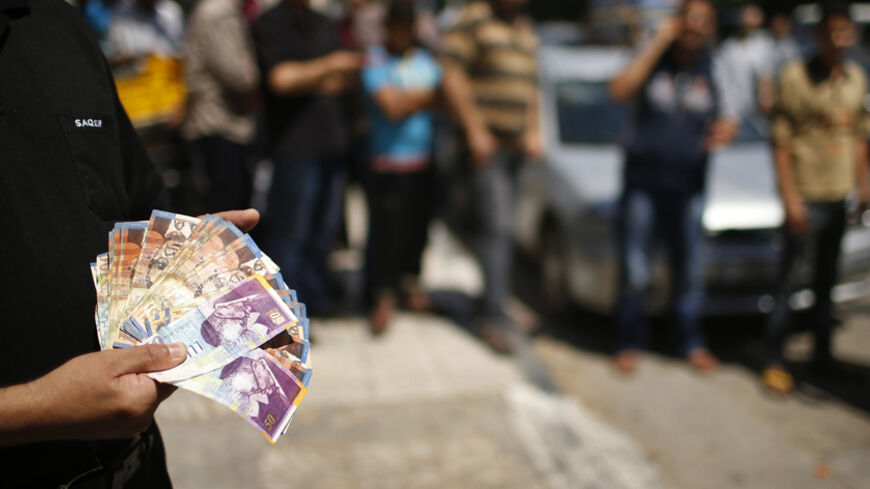 A Palestinian employee paid by the Palestinian Authority shows money to the camera after withdrawing cash from an ATM machine outside a bank, in Gaza City, June 11, 2014. - REUTERS/Mohammed Salem

RAMALLAH, West Bank — The prime minister of the Palestinian national reconciliation government, Rami Hamdallah, declared Oct. 3 that an agreement had been reached with Qatar, in coordination with the United Nations, to secure the transfer of a financial payment before the end of the month to a number of Gaza civil servants under the previous Hamas government. However, Ministry of Finance figures show that the government can't fulfill its financial obligations to these workers on a regular basis, because of its dependency on receiving regular financial aid from donor countries.

Mahmoud al-Zahar, a leading Hamas figure and a member of the delegation who participated in the Cairo negotiations, told Al-Monitor in a phone interview, “The agreement stipulates that those who were employed before and after June 14, 2007, are public officials, without regard to the nature of their jobs or ranks.”

Zahar said, “There are no civil and noncivil servants. A police officer is a civil servant. All these [people] are employees whom the Palestinian Authority [PA] did not recognize before. It considered them ‘illegitimate’ and ‘appointed by an illegitimate government.’ But now, after the agreement, they have been recognized. And the responsibility rests with the government. … An international party said that it would contribute to paying the Gaza workers’ salaries and no one opposes that. The reconciliation government is responsible for all the details.”

Hamdallah announced in a news conference Sept. 27, “The government seeks to secure the salaries of civil servants hired by Hamas in Gaza through a third international party.” This confirmed that the reconciliation government was unable to do so itself, and that salary payments have become dependent on international aid.

This development contradicts a previous statement by Hamdallah on Sept. 7, when he said, “All countries in the world have warned the government against paying money to [Hamas’] employees and that [the government] would face an international boycott if it does [pay them].” At the time, Hamas considered this to be an evasion of responsibility.

The issue of the salaries of Gaza civil servants comes at a time when the reconciliation government is suffering from a fiscal deficit, according to data from the Ministry of Finance.

On Sept. 27, Hamdallah said the government suffers from a funding gap estimated at $600 million, therefore is unable to fulfill its financial obligations in the coming months.

Government spokesman Ihab Bsaiso told Al-Monitor, “The government is experiencing a fiscal deficit. The prime minister has announced that the deficit has been accumulating for reasons related to [Israeli] occupation policies by withholding tax money, economic sanctions, the Gaza blockade — which is depriving us of financial resources that could be realized from the proceeds of the [Gaza] Strip — and the disarray of Arab and international aid.”

The Ministry of Finance's data, which includes figures until the end of August, shows that the reason for the funding gap is the decline in external support and the increase in the value of net loans.

Even though the Palestinian government has raised its revenues by improving tax collection, and the value of the monthly withheld revenues, the current expenditures have also increased. The wages and salaries bill has reached 52% of the total current expenditures, which until the end of September amounted to $2.82 billion.

These numbers worry Gaza employees. In addition to the dependency on an international donor body, the payment of salaries is vulnerable to economic swings and volatility and linked to obstacles caused by Israel such as the regularly withheld and delayed financial remittances to the PA.

Political analyst and writer Jihad Harb told Al-Monitor, “There is a problem at the level of donor countries: Israel doesn’t recognize the national reconciliation government. This raises a question about the possibility of transferring funds to the Gaza Strip without Israel suing these [donor] states in international courts, as happened with the Arab Bank.”

In addressing how this affects the reconciliation efforts, Harb said, “The reconciliation agreement won’t proceed properly without a solution to the practical problems, including the problem of the salaries”

Bsaiso said, "The government’s efforts are focused on enhancing communication with the Arabs and donor countries to garner support that would achieve sustainable development and pressure the occupation to stop its punitive policies, in addition to strengthening national unity and integrating official institutions.”

He added, “The government is committed to paying the salaries of the employees registered with the General Personnel Council. [The government] is seeking to find just solutions to employees who were hired by Hamas after June 2007.”

Abdul Karim said the government needs funding to cover the Gaza civil servants’ salaries, which are estimated at $300 million from the beginning of the government’s formation until the end of 2014. He added that this amount was not planned in this year's budget.

According to Bsaiso, the government is facing two obstacles regarding the salaries of the Gaza civil servants hired after 2007: the lack of financial support, as the budget was approved in February before there was any sign of a reconciliation agreement, and the government needing international guarantees that would prevent Israel from imposing a blockade on the Palestinians as a response to these financial measures, which should be well thought-out.

Gaza government workers are living a harsh reality as a result of their salaries being delayed for several months. On Oct. 3, the Ministry of Finance in the Gaza Strip disbursed a "$200 million advance."

The vice president of the Gaza Civil Servants Union, Ihab Nahhal, told Al-Monitor by phone, “The employees’ reality is tragic. About 50,000 Gaza [government] workers are living under deplorable conditions and are suffering from marginalization by Hamdallah’s government. The disbursement of the advance comes at a time when the employees received four times half of their salaries since December by the Hamas government.”

Nahhal said, “Since June 2, we didn’t receive any funds from the reconciliation government. Hamdallah’s statement that the nations of the world have warned about the consequences of transferring funds to Gaza is not true, as 10,000 employees in Gaza have been getting paid normally for seven years.”

According to Nahhal, there are 50,000 employees in the Gaza Strip, 10,000 of whom are paid regularly by the PA in Ramallah, while the PA has stopped payment of salaries of 8,000 others after the split. As many as 31,000 employees were hired after June 2007 by the Hamas government in Gaza.

While progress has been made between Fatah and Hamas to calm tensions, uncertainty remains over how the national reconciliation government will be able to resolve the dispute over the Gaza employees' salaries.