What EU shift in financial support policy means for Gaza

The European Union contribution of 30 million euros to pay the salaries of Palestinian Authority civil servants in the Gaza Strip will be used to support families in need, which has angered Palestinians. 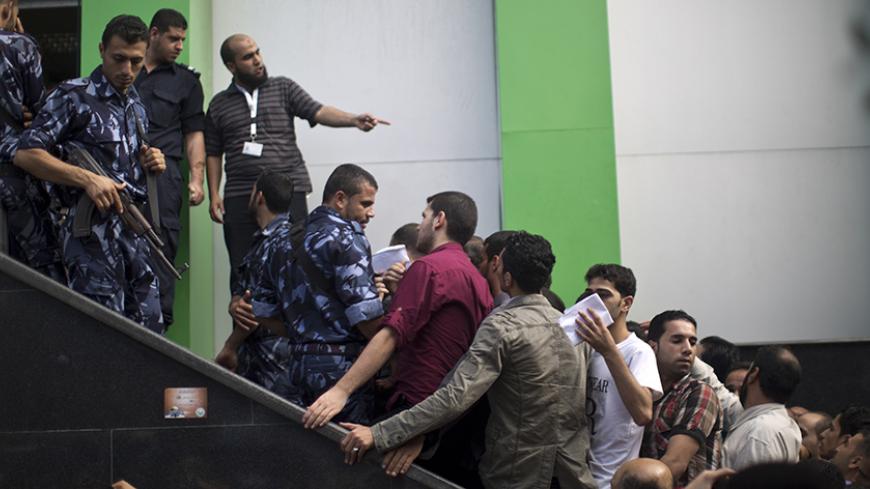 Palestinian employees of the former Hamas government queue up outside a post office to receive part of their wages that had been delayed for months, Gaza City, Gaza, Oct. 29, 2014. - MAHMUD HAMS/AFP/Getty Images

It is no secret that the Palestinian Authority's (PA) financial crisis is mounting with declining foreign support. This has prompted Mohammad Shtayyeh, a member of Fatah's Central Committee and former minister of public works and housing, to confirm Feb. 13 that donors' funding is decreasing and the PA's financial crisis is ongoing.

Shadi Othman, the communication and information officer at the European Commission in Jerusalem, said Feb. 3 that a new financial support policy for 2017 was adopted by the European Union, and that the EU contribution of 30 million euros ($32 million) that had gone to pay the salaries of PA civil servants in the Gaza Strip will be used to support families in need, provide job opportunities and fund development and infrastructure projects.

On Feb. 7, the PA government replied in a statement that the new EU approach will further increase the budget deficit. It said that last year, Prime Minister Rami Hamdallah launched efforts to prevent the EU decision, but to no avail. According to the statement, this means that the PA’s financial burden will grow and the $39 million monthly budget deficit will increase.

A European diplomat in the Palestinian territories, who spoke to Al-Monitor on condition of anonymity, said, “The new EU approach came to implement the recommendations of the European Monitoring Committee’s report of 2013, which rejected that civil servants who do not punch the clock be paid their paychecks by the EU, in the absence of any valid justification for the European taxpayers explaining why their money is channeled to these civil servants. Thus, the EU did not cut the funding, but rechanneled these funds to another sector, namely the families in need, instead.”

In December 2013, the European Court of Auditors recommended that the EU stop paying the salaries of PA civil servants in Gaza because the employees do not show up for work at the ministries. The EU financial support for the PA amounted to 5.6 billion euros ($6 billion) from 1993 until 2013

Mohammed Abu Jyab, the editor-in-chief of the Palestinian weekly magazine Al-Eqtisadia, told Al-Monitor, “The EU move — which came without PA approval — is designed to pressure the PA to end the split between the West Bank and Gaza Strip that has been ongoing since 2007. The Palestinian government’s possible commitment to bridge the financial gap caused by the EU move will further burden the general budget and cause the government to reschedule its expenditures to reduce the financial deficit and look for new financial resources.”

He said, “A few days ago, Palestinian Finance Minister Shukri Bishara responded to the EU move by examining the dossiers of 16,000 Palestinian beneficiaries of the EU-funded financial assistance program for the provision of additional funds. This will probably cause thousands to be removed from the list, which would provide the PA with millions of dollars and reduce the new EU move’s impact on the general budget.”

On Aug. 12, the Palestinian Central Bureau of Statistics reported that the unemployment rate in Gaza had reached 42%. Also, the United Nations Relief and Works Agency for Palestine Refugees in the Near East said in August that 80% of Gazans depend on humanitarian aid. In addition, Palestinian Minister of Labor Mamoun Abu Shahla said in January that there are 320,000 families in need in the Gaza Strip.

A Palestinian finance official in Ramallah, who declined to be named, told Al-Monitor, “There are up to 175,000 civil servants to which the PA pays $170 million per month, including 55,000 civil servants in Gaza receiving $41 million per month. The PA had demanded that its civil servants in Gaza not punch the clock in the summer of 2007, after Hamas took over Gaza. Since then, they have been paid although they do not work. We still don't know so far how this new 30 million euro deficit will be covered, despite the austerity measures, suspension of bonuses and government expenditure reduction.”

Omar Shaban, the director of Pal-Think for Strategic Studies, told Al-Monitor, “The EU decision could encourage other countries to take similar steps. This is because paying salaries to civil servants who do work is against their principles. It is the PA's responsibility to pay the salaries from other sources, such as taxes and custom duties from Israel. The civil servants would rather resume work and serve their community.”

In case the PA fails to give Gazan civil servants their paychecks, they will join the people in need who stand in the queues, which would further escalate the economic crisis and worsen living conditions in the Gaza Strip.

Jamal Nassar, the chairman of the budget committee in the Palestinian Legislative Council, told Al-Monitor that the EU decision is “just and logical. It does not make sense to pay civil servants who do not punch the clock. The right decision is to channel these funds to the poor who are a time bomb that could go off anytime, in conjunction with the widespread unemployment and poverty. The Palestinian government is able to cover the 30 million euro deficit by increasing taxes in the Gaza Strip, and cannot refrain from paying the Gaza civil servants, as it would be harmful for Fatah and would result in financial and organizational problems within the PA.”

The new EU approach is probably a sign pointing at the pressure placed on the PA to refrain from paying civil servants who do not show up for work, or to force the PA to reconcile with Hamas. At the same time, the new EU approach, which would increase the number of unemployed, may be designed to pressure Hamas, which could fear an implosion with thousands of civil servants being denied their salaries.