Donor states are threatening to stop transferring funds destined to pay the salaries of former Palestinian Authority employees in the Gaza Strip. 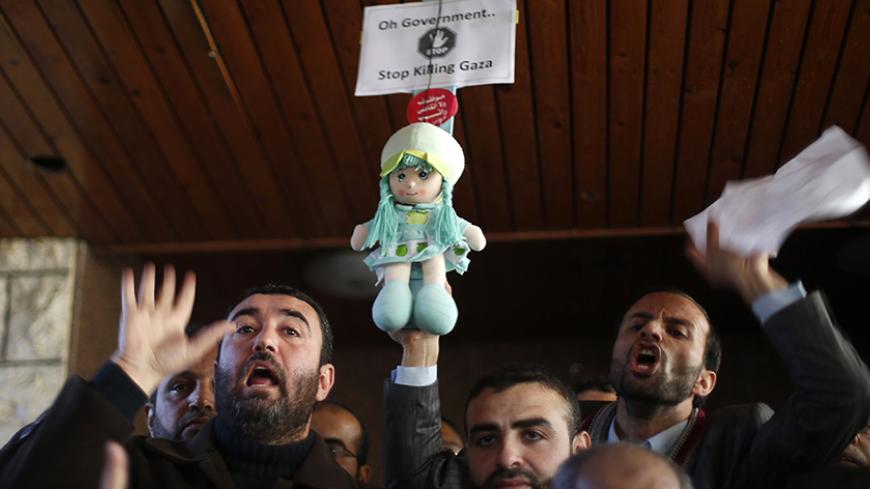 Palestinian, Hamas-hired employees shout slogans after breaking past the gate of the Palestinian Cabinet headquarters to demand their pay, in Gaza City, Gaza, Jan. 13, 2015. - REUTERS/Suhaib Salem

Tens of thousands of Gaza Strip residents who are on the Palestinian Authority payroll have been terribly worried this past week. That is because it was disclosed that the PA may well cut hundreds, even thousands, of names from the payroll in the very near future.

The term “employed by the Authority in Gaza” is misleading, since most PA civil servants in Gaza are forcibly unemployed after they were fired from their jobs by the Hamas government. Exceptions: those who work in the border crossings and the health services. Thus, the PA in Ramallah still has direct responsibility for the fate of about 55,000 people who receive salaries even though they actually do not work.

According to a senior Palestinian source, the salary of each “employee” ranges from an average of $500 to $1,000 a month (depending on the position and rank). This means that the Palestinian Finance Ministry in Ramallah is forced to transfer astronomical sums of about $45 million every month to pay the salaries of the former PA civil servants in Gaza.

The salaries of the workers, in the West Bank as well as in Gaza, mainly come from aid money that is then transferred to the Palestinian Finance Ministry. And the aid money is comprised of donations of Arab states (mainly Saudi Arabia), the European Union and the American government. From 2015-2016, the Barack Obama administration suspended $221 million in financial support to the Palestinians allocated by Congress. Only hours before leaving the Oval Office, Obama approved the transfer of this financial assistance to the PA for humanitarian aid in the West Bank and Gaza Strip. The Donald Trump administration halted this money transfer, and has just now, on March 9, confirmed that the money is being delivered — on the administration's conditions.

In October, Britain announced it was stiffening its criteria for its annual aid of 25 million pounds ($30.4 million). From now on, all those receiving salaries from the PA would come under British scrutiny, and Britain would resume its aid only if the PA could show that the money was not funding or supporting terrorists or families of terrorists.

Palestinian Prime Minister Rami Hamdallah said in December that donations to the PA had declined significantly over the last year. This means that another cutback in donations may well lead to the termination of vital services in the PA, insolvency and an inability to pay the salaries of its employees.

The conclusion is clear: If this scenario becomes a reality, tens of thousands of families in Gaza and the West Bank will remain without a source of income. And this may well lead to an extensive financial crisis in the PA, even to its collapse.

Against the backdrop of concerns over sanction by donor countries, Palestinian President Mahmoud Abbas instructed the Palestinian Finance Ministry to examine the list of salary-receivers in Gaza. The ministry is to check whether any “PA civil servants” have crossed party lines in the last decade — meaning, leaving Fatah — to join one of the other organizations in Gaza that donor countries categorize as terror organizations.

It became known to Al-Monitor that Israel itself conducted a comprehensive check of tens of thousands of Gazans on the payroll, and the results were transferred to the donor countries via Foreign Ministry representatives. It is no coincidence that Britain, Holland and Germany have all expressed their protests to the PA and threatened to re-examine their financial aid commitments to the PA — should Abbas’ bureau continue to pay salaries to “terror agents.”

True, much of Britain’s ire is directed at the paying of monthly stipends to families of West Bank terrorists who carried out attacks against Israel. However, there is also the issue of salaries paid to PA employees in Gaza, some of whom have joined the ranks of Gaza terror organizations. This, too, may well cause some donor countries to shut the tap altogether or cut back their aid, as Britain has done recently.

A top-brass member of Fatah in the Gaza Strip, whose salary was terminated by Abbas’ people because of the claim that he is a supporter of Abbas’ political rival Mohammed Dahlan, spoke to Al-Monitor on the condition of anonymity. He said that over the years, hundreds of the “forcibly unemployed” workers of the PA looked for additional sources of employment and some joined the ranks of other organizations. In his view, a large portion of the PA security forces joined Hamas security apparatuses, mainly the civil, or blue, police. Our source said they receive salaries from Hamas, and that the PA has long since ceased paying them monthly salaries. But other PA employees were in such dire financial straits in Gaza that they were willing to do anything to bring home bread to their families. And some, he said, ended up over the years in the ranks of other organizations. Some even became part of Hamas’ armed branches and, mainly, of the Islamic Jihad. “When you have no choice, you’ll do anything to feed your family,” he said.

It wasn’t only money that pushed them into the ranks of other organizations but also idleness. “How many years can a fellow sit at home and do nothing?” he asked.

The issue of salaries to former PA workers in Gaza is a huge dilemma that Abbas has grappled with ever since the Hamas coup in 2007. The financial burden of these salaries on the PA is tremendous, and the specter of economic collapse has hovered over PA institutions for years. However, should Abbas stop paying the salaries of former PA workers in Gaza, he would face accusations of being responsible for a widespread humanitarian crisis. Therefore, despite the chronic budgetary difficulties involved, Abbas continues to maintain his responsibility for the fate of the “employees” in Gaza. It is highly doubtful that the PA can put all the Gaza payroll people to the test, and even less likely that Abbas will give much credence to the lists prepared by Israel regarding those same people.

But Abbas is not the only one facing a dilemma. Israel faces a dilemma, too. True, Israel’s Foreign Ministry conveyed to the aid-giving countries a blacklist of “terror activists” and families of “martyrs’’ receiving salaries. But Israel is also aware of the dangers in stopping, freezing or cutting back aid.

Nevertheless, Israel has succeeded in applying pressure on Abbas, who must now examine the whole salary issue again. He is certainly aware of the fact that if he wants to preserve whatever is left of the dwindling foreign aid, he must take action. Otherwise, the price he will be forced to pay will be very dear indeed.