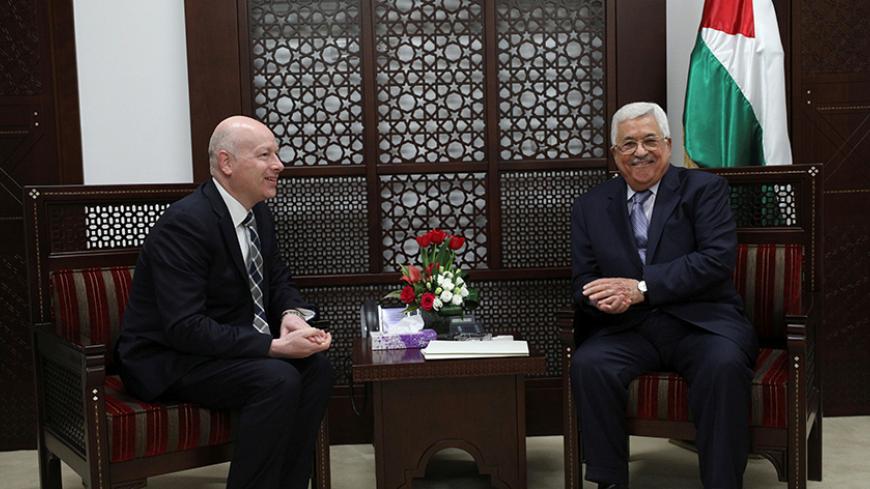 Even before the arrival March 12 to Jerusalem and Ramallah of Jason Greenblatt, President Donald Trump’s representative for international negotiations, the Palestinians were concerned. They were already aware of the voices in Washington calling for a halt of American aid to the Palestinian Authority (PA) until payments to families of shahids (martyrs) are halted.

Those in Palestinian President Mahmoud Abbas’ bureau tried to circumvent the problem. As reported by Al-Monitor last week, Abbas instructed the Finance Ministry in Ramallah to probe a possible discontinuation of salary payments to PA workers in the Gaza Strip who left Fatah and joined other groups that are categorized as terror movements by donor organizations. Indeed, the issue of salaries to Gaza employees is a separate issue, but Abbas’ entourage hoped that such steps would prove to the Americans that Abbas is acting with determination against Gaza employees suspected of joining other (terror) groups, and that he is taking each and every matter seriously. Obviously, this did not convince the Americans.

When Greenblatt arrived at the meeting in the Palestinian headquarters at the Muqata on March 14, he immediately placed the issue on the table. A Palestinian source told Al-Quds newspaper that Trump’s emissary delivered an unequivocal ultimatum to Abbas: The United States will not hesitate to discontinue its financial aid to the PA if it continues to pay compensation monies to families of shahids. According to the report, Greenblatt named the senators and congressmen who are taking action to stop the aid. Some of them are Republican Sens. Lindsey Graham and Marco Rubio, Democratic Sen. Robert Menendez, and dozens of other bipartisan members of Congress. They are all resolved to halt American aid money.

Those in the environs of Abbas turn an accusing finger at Prime Minister Benjamin Netanyahu, whom they feel is responsible for the incitement campaign against the Palestinian president. They claim that the Israeli prime minister encourages congressmen and senators to impose sanctions on the PA, even though these Americans do not have a full picture of the situation in the PA. Also, they do not understand that a shahid in Palestinian society is anyone who was harmed by the occupation forces, whether or not he or she carried out a terror attack.

The number of families who receive a monthly stipend from the PA is classified information. However, the estimate is that the list includes thousands of Palestinian families who have had sons or daughters killed by Israel in armed conflicts, including the second intifada (2000-2005) and in the recent terror wave.

A Fatah source told Al-Monitor that the custom of paying reparations to families of shahids began during the first intifada (1987-1993). That was when payments flowed to the Gaza Strip and West Bank from then-Iraqi President Saddam Hussein, who wanted to encourage the insurrection against Israel. After Saddam’s downfall and after PLO leader Yasser Arafat arrived in the West Bank and Gaza, the PA took upon itself what was called “welfare activities” for the opponents of the occupation over the generations and started paying reparations to families of shahids. The source estimates that the PA spends tens of millions of dollars a year on this from its budget, irrespective of American aid.

“Mahmoud Abbas will not be able to halt the reparations payments to the families,” Qadura Fares — one of the senior members of the Fatah movement in the West Bank and head of the Palestinian Prisoner's Club — told Al-Monitor. He explains that Palestinian society holds a completely different attitude toward those whom Israel calls “terrorists.” These militants are, instead, regarded as people who sacrificed themselves for the liberation of the Palestinian people from the Israeli occupation. Fares noted that most of the slain Palestinians did not necessarily carry out armed activities against Israel. Many of them were civilians killed by Israel Defense Forces' fire in the course of clashes in the West Bank and Gaza.

“If the [PA] stops the payments, Mahmoud Abbas will face protest demonstrations he won’t be able to handle,” Fares said. Additional senior Fatah men also claim, in a conversation with Al-Monitor, that the results of such a move could critically harm the position of Abbas and of the PA in general. Abbas’ stature in Palestinian public opinion is already very shaky. Polls that were conducted last in 2016 showed that not only do most Palestinians not support Abbas, but that they even think he should resign.

There are many reasons for the prevailing Palestinian dissatisfaction with Abbas’ functioning. His conciliatory policy vis-a-vis Israel and the failure of his promise to liberate Palestine through diplomatic negotiations and nonviolent methods have worked against him. Also, his insistence on continuing security coordination with Israel at all costs does not go down well with Palestinians. Instead, they feel that he is more concerned about Israel’s interests than the interests of his own people.

It is on this background that high-level Fatah officials say that should Abbas dare give in to the US demands and halt the payments to families of the shahids, this will be a political deathblow spelling his political demise. They argue that under such circumstances there is no chance that a single Palestinian will agree to support a future peace agreement with Israel if and when the diplomatic process will be renewed under American mediation.

On the other hand, Fatah understands that the American ultimatum cannot be undone. They must adopt some goodwill tactic to prevent the financial aid from being cut back or cut off. A Fatah member told Al-Monitor that the senior members of the movement are considering a reorganization of the payment method to families of shahids. According to the proposal on the table now, the PA would continue to pay the salaries of the “veteran” shahid families from its budget. But for new families, a different arrangement will be made external to the PA's budget. The proposal is to establish an independent fund under the responsibility of the Fatah movement, which will then assume responsibility for those who “sacrificed themselves for the Palestinian people.”

The Fatah people believe that if this proposal is implemented, the pressures on Abbas will be removed; he could no longer be accused of encouraging terrorists. He would even be viewed as trying to fight against those planning armed operations.