Defense Minister Avigdor Liberman promotes the ‘Pay to Slay’ bill, deducting payouts to families of assailants from tax revenues of the Palestinian Authority. 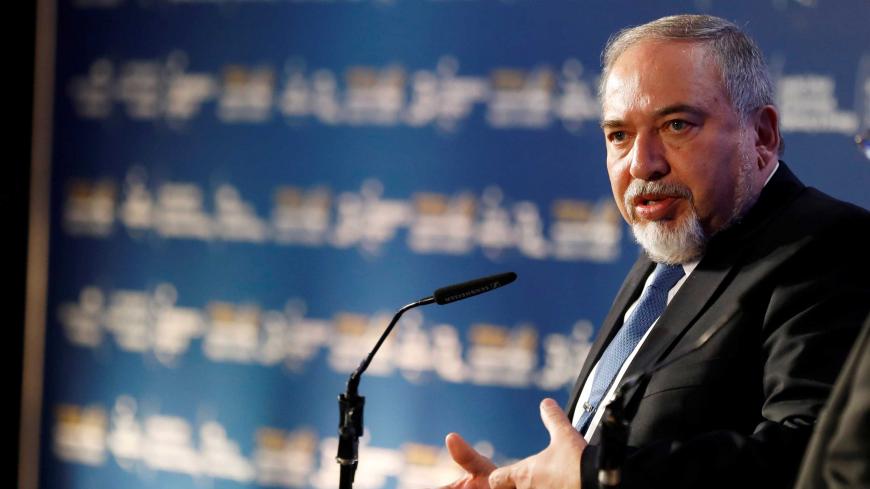 Israeli Defense Minister Avigdor Liberman gestures as he speaks during the Herzliya Conference, in Herzliya, Israel, May 10, 2018. - REUTERS/Nir Elias

On May 7, the Knesset approved the first reading of proposed legislation by Defense Minister Avigdor Liberman and Israel’s Justice Ministry that would enable the government to withhold money destined for the Palestinian Authority (PA). Under the proposal, the government would deduct payouts to families of convicted Palestinian terrorists from the tax revenues transferred by Israel to the PA.

Ahead of the vote, the Ministry of Defense issued figures showing the amount of money given to the families of Palestinians jailed for terror attacks against Israelis throughout their incarceration. Thus, for example, Karam Fathi Lutfi Razaq, convicted of the October 2015 murder of Eitam Henkin and his wife, Naama, in the Samaria region of the West Bank, has thus far received 40,600 shekels ($11,370) — 1,400 shekels for each month in jail. The ministry calculated that by the time he is 80, Razaq will have received over 11 million shekels ($3.08 million). Another terrorist, Omar Abu Jalil, convicted of killing three members of the Solomon family in the West Bank in July 2017, also gets 1,400 shekels from the PA for each month he spends in jail, and by the time he’s 80 will have gotten over 12.5 million shekels. The more severe the Israeli sentencing, the higher the payout, which can go as high as 10,000 shekels a month. The Defense Ministry reports that the PA also pays stipends to the families of Palestinians carrying out terror attacks who were killed by Israeli forces.

In January 2018, the Defense Ministry published figures indicating that in 2017, the PA paid prisoners and former inmates more than 550 million shekels. The families of suicide bombers or of injured terrorists received an additional 687 million shekels. In all, the PA allocated 1.2 billion shekels, which constitute 7% of its annual budget, for such payments. The proposed bill, which faces a second and third reading before being enacted into law, would enable Israel to withhold sums equivalent to 3% of the PA’s budget. The proposal refers only to the payments made to families of prisoners, and not to payments made to families of assailants killed or injured during attacks.

The proposed bill would allow Israel to deduct the money from funds it transfers to the PA under the terms of the April 1994 Paris Protocol. Israel collects the money in duties on goods destined for the PA that are imported through its sea and airports. Israel would divert the deducted funds into a special compensation fund for the Israeli victims of terrorism and the funding of counterterrorism projects.

After the bill was approved by the Knesset’s Ministerial Committee in February, Liberman said his bill would put an end to the “theater of the absurd.” Knesset member Elazar Stern of the centrist Yesh Atid party, who proposed similar legislation in the past, said that by allowing money to reach the PA, Israel was encouraging future terrorists.

In fact, the United States recently enacted similar legislation. In March, Congress adopted the Taylor Force Act, designed to cut some State Department aid to the PA as long as the PA keeps paying stipends to Palestinian terrorists. However, whereas the US bill, which has yet to be implemented, calls for halting aid to the PA, Liberman’s bill would stop the transfer of PA funds that Israel collects for the Palestinians.

The proposed law enjoys broad support among Israeli lawmakers, who view payments to terrorists who murder Israelis as providing moral and national legitimacy to terrorism by enabling the PA to honor terrorists for their deeds. In effect, the payments have turned terrorism into a way out of poverty for Palestinian families. For example, in a letter he wrote before setting out on a knifing attack in March 2016, Ahmed Amar from the Samaria village of Messha described his heavy debts. “My dear mother and father, forgive me and absolve me of blame,” he wrote in the letter found on his body after he was shot dead by Israeli troops. The PA paid the family compensation.

In November 2014, the Ofer military court sentenced Ashraf Issa from the West Bank town of Nablus to eight years in prison for his role in three shooting attacks. Under interrogation by the Shin Bet security agency, Issa admitted his involvement in the attacks, saying he was motivated by economic hardship after failing to keep up the payments on the house he built. He was given a relatively lenient sentence because he was found to be telling the truth when he said he made sure not to kill Israelis and only to get arrested so he could get compensation from the PA.

Even if Liberman’s proposed bill is morally defensible, it can expect significant obstacles once it receives final approval. Israel will have to contend with legal challenges in international courts over its expropriation of funds, which are the property of the PA and part of its budget, and Israel's violation of written accords it signed. Hanan Ashrawi, a member of the Palestinian National Council, described the deduction of funds as “outright theft.” In a harsh statement after the first Knesset approval, Ashrawi lambasted the bill, saying it would “turn the military occupation into a very profitable economic venture for Israel.” The head of the Palestinian Prisoners Club, Qadura Fares, tells Al-Monitor the law is a populist political move by Liberman, adding that Palestinian President Mahmoud Abbas cannot stop the payments. The day he dares do so, said Fares, he would immediately forfeit his office.

Although Liberman would probably not lose any sleep over Abbas’ downfall, absent other funds for the troubled Palestinian economy, attention is warranted to the repercussions of delaying funds to the PA and deepening the distress of the West Bank Palestinians — that same distress that drives some young Palestinians to terrorism. On the other hand, if one accepts the Palestinian claim that Liberman is driven by political considerations and popularity ratings, one cannot but view the pricelist of the PA payments as a detailed sales catalogue offering young Palestinians a dubious deal: murdering Israelis in return for honor, glory and financial reward.