Why Abbas risks an economic collapse of the PA

Prime Minister Benjamin Netanyahu promised to soon implement the law on deducting terrorists’ salaries, yet Palestinian President Mahmoud Abbas knows that on the day he stops payments, the Palestinians themselves will bring him down. 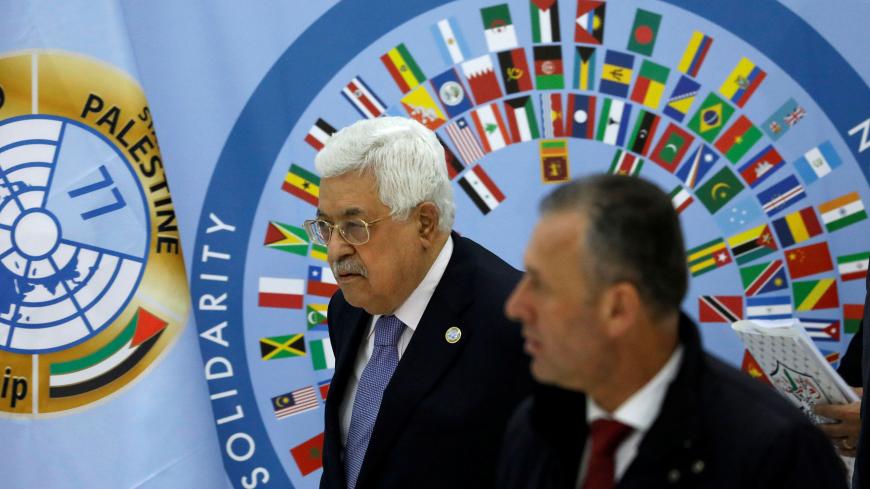 The Knesset passed the "pay-to-slay" law in July 2018, which enables the government to withhold tax money from the Palestinian Authority (PA) as long as it continues to pay stipends to Palestinian assailants in Israeli prisons and to their families.

Although the Knesset passed the law seven months ago, the Israeli government continued to transfer taxpayer money it collects for the PA to the Palestinian authorities as usual. Not one shekel has been deducted from it. The defense establishment hoped that no one in Israel would notice. They were concerned that any attempt to deduct those costs would lead to an escalation of violence, a threat that was exacerbated when Congress passed the Taylor Force Act in March 2018, cutting American financial aid to the PA.

On Feb. 1, senior PLO officials Saeb Erekat and Hanan Ashrawi exchanged angry and provocative tweets with President Donald Trump’s envoy to the Middle East, Jason Greenblatt. In their own ways and using their own particular styles, both officials reminded him that Jerusalem is not for sale and the Palestinians have no interest in appearing before American courts, which can require them to pay compensation for American citizens killed by Palestinian terrorists. Greenblatt already has a miserable relationship with Erekat, so his response should come as no surprise: “So let me get this clear: You want only benefits and no responsibilities?”

The 1994 Paris Protocol signed between the Israelis and Palestinians put some order into the various economic issues between the two parties. It included the provision that Israel would collect various taxes for the PA and transfer the money to it after necessary deductions such as import taxes on goods destined for the PA. The problem is that over the years, Israel exploited this agreement to apply pressure to the PA and manipulate it.

The first Israeli leader to do this was former Prime Minister Ehud Olmert. In January 2006, he decided to freeze the transfer of funds in reaction to the Hamas victory in the Palestinian parliamentary election. Prime Minister Benjamin Netanyahu took the same approach, stopping the transfer of money whenever the right pressured him to impose sanctions on Palestinian President Mahmoud Abbas. Over time, many Israelis came to be under the false impression that the money being held back was a grant. In fact, the Paris Protocol reflected the interest of the Israeli government at the time, which wanted to avoid an economic border between the State of Israel and the PA. Such an economic frontier would have been perceived as a sign of Palestinian sovereignty.

Both morally and as a matter of principle, Israel is opposed to paying compensation to any Palestinian who commits an act of terror against Israelis. It rightfully sees this as a way of incentivizing desperate young Palestinians to commit acts of terrorism in order to improve their families’ financial situations (as they know that their families will receive stipends after they are caught or hurt). Having said that, from the Palestinian perspective, the assailants are not terrorists but legitimate freedom fighters operating under occupation.

When the Palestinians realized that Israel intends on leveraging the Paris Protocol to apply pressure on them, they launched a campaign designed to expose this unjustified link from their point of view. That is why on Feb. 7, Palestinian Minister of Civil Affairs Hussein al-Sheikh transferred a clear message to Israel: The PA would refuse to accept any of the taxpayer money that Israel collects on its behalf if Israel links the Paris Protocol to the stipends paid by the PA to the families of Palestinian prisoners and "shahids" (martyrs). In other words, the PA rejects Israel’s intention of deducting these amounts from the due tax revues.

The fact that this Palestinian appeal was leaked to the media instead of being made behind the scenes indicates that the crisis was planned in advance in an attempt to reshuffle the deck and release the Palestinians from the Oslo Accords (by which Israel collects tax money for the Palestinians), no matter what the outcome. It is as if they are saying, “Let’s see you Israelis and Americans deal with the collapse of the PA and the utter elimination of any security collaboration.”

Just one day after the Palestinian threat became public, on Feb. 8 a young Israeli girl named Ori Ansbacher was brutally raped and killed in Jerusalem. In an impressive joint operation, the Shin Bet and the Yamam Counter-Terrorism Unit caught Arafat Irfaiya, from Hebron, less than 24 hours later. He admitted committing the rape and murder during his interrogation and even re-created the crimes for his investigators. Although the Israeli security forces did not offer many details about the rapid operation to capture the terrorist, it is doubtful that such a speedy intelligence and arrest operation without any Palestinian casualties could have taken place without security cooperation between Israel and the Palestinian security forces.

After the murder, New Right head Naftali Bennett criticized Netanyahu’s government for not implementing the law. In response to the criticism, Netanyahu used the Feb. 10 Cabinet meeting to commit to the quick implementation of the law to offset terrorist salaries.

Of course, after making this commitment, Netanyahu will have a hard time walking it back. Public opinion in Israel was shocked by the murder. Under no circumstances would it agree that the family of a Palestinian assailant behind such a brutal rape and murder of a 19-year-old girl would receive payment from the PA for as long as the perpetrator sits in an Israeli prison.

This is where the trap lies. The PA has announced that it would refuse to accept the taxpayer money owed to it if the salaries of terrorists are deducted. In other words, an economic crisis is right around the corner. As aforementioned, this is a self-imposed crisis, intended meticulously to bring about the economic collapse of the PA, which would, in turn, lead to calls of SOS to extricate it from the very crisis it was forced to bring on itself.

What happens then? Apparently, no one in Israel, Ramallah or Washington can say with any certainty. Obviously, Abbas knows that on the day he stops payments to the families of the martyrs and prisoners, the Palestinians themselves will bring him down. As far as he is concerned, the imminent economic crisis is a way to alleviate the blow, which is coming no matter what.