Israel seeks to cut off funds for families of prisoners

Israel has long claimed that the money the Palestinian Authority pays to the families of Palestinian "martyrs" killed or imprisoned in Israel amounts to incentives to commit murder, and now the Knesset is considering a bill to prevent such payments. 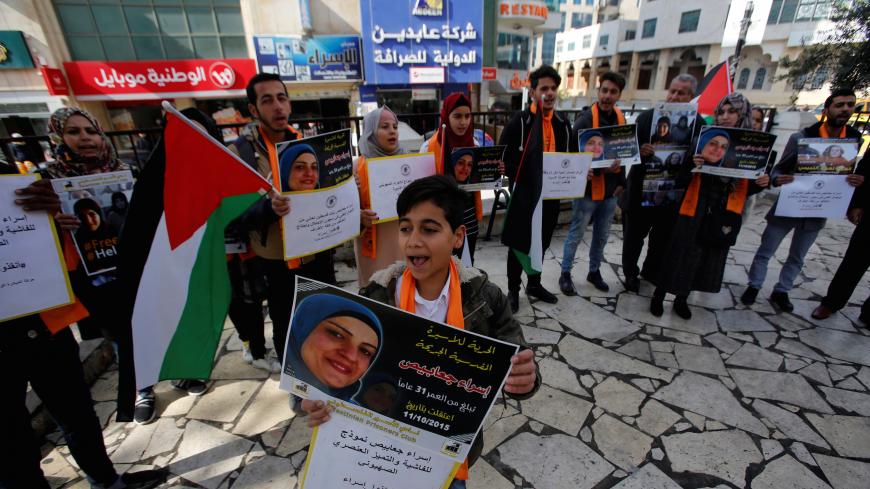 A boy holds a picture of Palestinian prisoner Israa Jabees during a rally calling on Israel to release her, in the West Bank city of Hebron, Jan. 16, 2018. - REUTERS/Mussa Qawasma

RAMALLAH, West Bank — Palestinians have been preoccupied with news that the Israeli Knesset is considering legislation designed to keep the Palestinian Authority (PA) from paying allowances to prisoners, "martyrs" and their families.

Legislators discussed the proposal Jan. 9. If passed, the law would pose an economic threat to the families of more than 6,500 prisoners in Israeli jails and a similar number of Palestinians who have died or have been disabled while fighting Israel. These families obtain stipends from the Palestinian Commission of Detainees and Ex-Detainees Affairs.

Israel’s Akka reported the commission paid 550 million Israeli shekels ($161 million) to the families of prisoners and released detainees in 2017, and the families of the dead and wounded received 687 million shekels ($202 million). Israel claims the total of $350 million is equal to nearly 7% of the PA’s annual budget.

Official Palestinian sources, namely the commission and the Palestinian Authority Martyrs Fund, have not disclosed the amounts.

Esmat Mansour, a political analyst of Israeli affairs, told Al-Monitor that while the bill may pass, he does not believe the law could be implemented successfully. He said it would be impossible for the PA to stop making the payments, as that would cause a public uproar. "All signs indicate that Israel will pass such a bill. Yet I believe that in that case, [the law] will be used only for the purpose of blackmailing the PA. Everybody knows that such a move would affect the PA’s stature.”

Mansour was imprisoned for more than 20 years in an Israeli jail on charges that he participated in killing an Israeli settler. During that period, the allowances he obtained from the PA were the only source of income for his family and himself, as the prisoners’ families must pay the prison commissary from their own pocket.

Commission representative Hussein Abed Rabbo agreed with Mansour. He told Al-Monitor that paying the allowances is a national commitment that the PA will never relinquish, regardless of the circumstances.

The practice of paying the families is nothing new, he said. It began under a PLO decision in 1968 and continued through the formation of the PA and the Ministry of Detainees and Ex-Detainees Affairs in 1995.

The PA, represented by the commission, confirmed that the allowances will not be affected if the legislation is passed, but the question remains as to how the PA will make up for the amount deducted from its budget.

Samir Abdullah, research director at the Palestine Economic Policy Research Institute, told Al-Monitor, “These are Palestinian funds, not donations subject to any condition as per how to spend them. These are the Palestinian people’s funds, which Israel is collecting on behalf of them in exchange for collection charges under [the 1994 Paris Protocol]."

He noted that two-thirds of the Palestinian budget comes from clearance revenues — tax revenues that Israel collects on behalf of the PA — and one-third comes from various sums collected by the Ministry of Finance. He said, “We will be facing a new battle. The PA budget will be facing a high deficit added to the already existing cumulative deficit.”

Abdullah claims that Israel is exaggerating when it says the amount of families' allowances equals 7% of the PA's budget, and that the exaggeration is a ploy to steal money from the clearance revenues. In 2016, the World Bank estimated that the PA was losing revenues of $285 million annually under its unfavorable financial arrangements with Israel.

The upcoming days will determine whether the legislation will be approved and how the debt-ridden PA will respond.