Abbas backs down on decision to refuse clearing funds

Crippled by a severe financial crisis, the Palestinian Authority has recently accepted the clearing funds from Israel that it had been refusing for eight months. 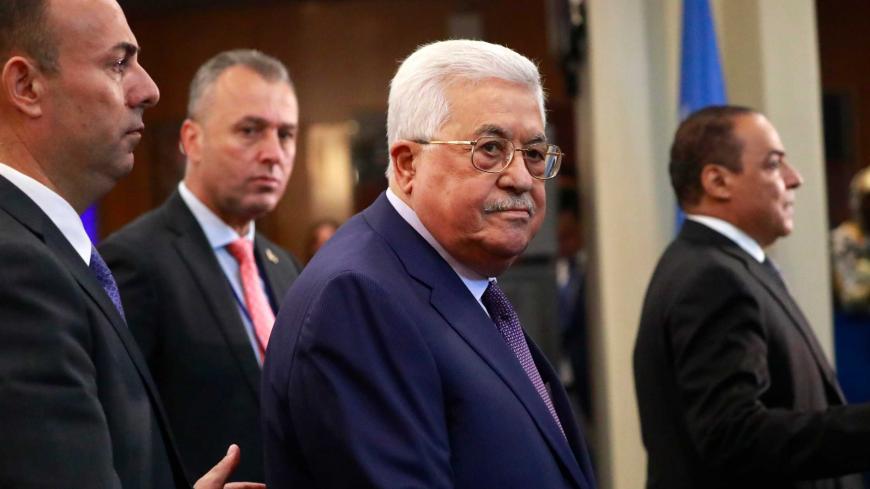 Palestinian Prime Minister Mohammad Shtayyeh announced Oct. 7 that Israel transferred to the Palestinian Ministry of Finance 1.5 billion Israeli shekels ($428 million) from the withheld clearing funds, following an agreement between the Palestinian Authority (PA) and Israel, according to Israeli Channel 13 on Oct. 4.

The PA agreed to receive these funds after it had been rejecting them for eight months.

The agreement came after Israeli Finance Minister Moshe Kahlon met Oct. 3 with PA Civil Affairs Minister Hussein al-Sheikh in Jerusalem. Sheikh contacted Palestinian President Mahmoud Abbas during the meeting and got his approval after briefing him on the details of the agreement.

Under this agreement, Israel would continue to withhold part of the tax money transferred to Palestinian prisoners and families of those killed, but Palestinians would be receiving the withheld tax funds.

The PA is yet to announce whether or not prisoners and families who lost loved ones would get the money they are owed. An agreement is yet to be reached with the Israelis regarding this issue.

On Feb. 27, the PA announced that it would not accept incomplete clearing funds following the decision of the Israeli Cabinet on Feb. 17 to deduct 502 million shekels ($143 million) a year from Palestinian clearing funds.

Israel deducted this amount because it represents the money the PA had paid in 2018 to prisoners in Israel, to families of people the PA terms martyrs and to people wounded as a result of confrontations with Israel.

Samir Abdullah, former Palestinian minister of labor and planning in Ramallah and senior researcher at the Palestinian Economic Policy Research Institute - MAS, told Al-Monitor, “The PA’s decision to refuse incomplete clearing funds was misplaced, even if its political objective was to preserve the rights of prisoners in Israel and families of martyrs. The financial crisis kept degenerating by the month. We tried to manage our affairs, but our efforts hit a dead end because Israel is backed by the West and the United States, and we are fighting it without any support. We changed our position to avoid a suicidal situation.”

On Aug. 22, Israel transferred to the PA seven months’ worth of revenues of the fuel tax, the so-called blue tax, which Israel collects and transfers with clearing funds. The revenues amounted to 2 billion shekels ($570 million). With this transfer, the PA thus managed to pay 300 million shekels ($85.5 million) as part of its debts owed to the Israel Electric Corporation, and pay the salaries of Palestinian public sector employees, which amount to $500 million shekels per month ($142 million).

When the PA refused to receive the partial payment of clearing funds in February, this included the fuel tax, which amounts to 200 million shekels ($57 million) per month.

This means that the two sides have realized that the PA was on the verge of an economic collapse that could negatively affect both, especially as far as security coordination is concerned.

Hamas spokesman Hazem Qassem told Al-Monitor, “The PA’s decision to back down on its decision shows that it lacks the will to confront Israel. Instead of reversing its decision, the PA should have stopped pursuing the resistance and stopped security coordination with Israel. However, it seems that the personal interests of some PA leaders prevent it from taking any decision against the occupation policy.”

The recent Palestinian decision proves the difficult economic conditions plaguing the PA amid the Israeli insistence to keep withholding a portion of the clearing funds.

The PA did not announce whether or not it would be resuming the disbursement of the prisoners and martyr families’ entitlements. The technical committees between the two sides will decide on this.

However, the PA decision not to accept the clearing funds altogether was not widely welcomed by Palestinians, some of whom perceived the rejection as a form of “grudge” and an impulsive reaction that could have repercussions and could contribute to exacerbating the financial crisis and the tough living conditions of the Palestinians.

Hani al-Masri, head of the Palestinian Center for Policy Research and Strategic Studies – Masarat, told Al-Montior, “The recent PA decision to accept the incomplete clearing funds amid Israel’s intransigence confirms that the initial Palestinian decision was not a strategic decision, but rather an impulsive and populist one aimed at gaining time. These miscalculations seriously exacerbated the economic crisis as a popular explosion loomed.”

The PA backed down on its decision at a remarkable timing that revealed the incorrect assumptions they had made. It first bet on the Israeli security services to convince their government to return the money to the PA for fear of its collapse, but this did not happen.

Second, it bet on the Israeli elections in April and September to result in the overthrow of Prime Minister Benjamin Netanyahu and the formation of a government that would reverse Netanyahu’s decision and return the clearing funds in full, which did not happen.

Third, it bet on getting Arab financial assistance. But despite successive Palestinian appeals, the Arabs failed their Palestinian brothers, either because they were too busy with domestic issues or because they feared raising the ire of the United States by supporting the PA.

Mohammed Abu Jiyab, editor-in-chief of Al-Eqtesadia newspaper in the Gaza Strip, told Al-Monitor, “The PA's refusal to receive the incomplete clearing funds was not serious, as evidenced by the continued joint Palestinian-Israeli meetings to end the clearing funds crisis. This means that it was all just a media and political stunt. What has pushed the PA to accept now what it previously rejected is the financial crisis that is beginning to affect its stability amid popular and organizational discontent within the West Bank. So accepting the funds was like a lifeline for the PA.”

Abbas’ decision to no longer honor his pledges to refuse incomplete clearing funds, the latest of which was on Sept. 9, shows that the president is monopolizing the decision-making process. A poll published by the Palestinian Center for Policy and Survey Research on Sept. 22 showed that the Palestinian support for Abbas’ decision to refuse the funds has declined from 62% to 54%.