What drives the new, lone-wolf attackers?

The lone-wolf attackers are "a new model stemming from total aversion toward the entire Palestinian political establishment as well as deep disappointment with the failure of the previous generation to deliver on its promises." 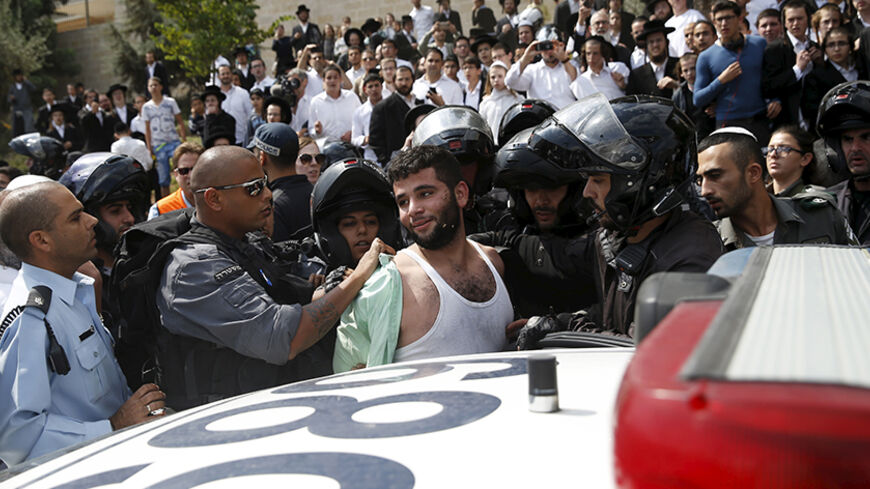 Eitam and Naama Henkin were murdered in a drive-by shooting in Samaria on Oct. 1 by a Nablus-based Hamas cell whose members were arrested the following day in a joint operation of the Israel Defense Forces (IDF) and Shin Bet. Ever since that murder, dozens of terrorists, mostly in their teens, have set out to mount attacks in Israel. The most recent terror attack, as of the time of this article, took place on Oct. 18 in the southern city of Beersheba. It was carried out by a terrorist from the Bedouin community. Armed with a gun and a knife, the attacker arrived at the central bus station, murdering an IDF soldier and wounding 11 civilians, two of them seriously.

Once again Israel is gearing up to defend itself against assailants who use minimal means — a knife or a gun — but who have managed to strike fear in its citizens. The Israeli defense establishment, as well as the Palestinian one, is still grappling with the question whether this is a wave of terror that can be controlled or whether this is indeed the outbreak of a third intifada that could wreak havoc in the Palestinian Authority (PA).

The terrorists, except for the cell that carried out the attack in Samaria, were apparently unorganized. All of them, it has been reported, had no security records, never spent time in an Israeli jail and were not affiliated with any armed Palestinian organization.

Furthermore, although the tension surrounding the Temple Mount is what sparked the recent wave, what drives the attacks against the Zionists is not a religious motive, but a nationalist one. The terrorists operate in total contrast to the declared interests of the PA and President Mahmoud Abbas, who wants to avoid an armed confrontation with Israel while exhausting the diplomatic routes toward recognition as a state by the United Nations.

So who are these new terrorists and what characterizes and unites them? And how is it possible that, unlike in the past, the big organizations, which control the ground, are now caught by surprise without the ability to control the events?

The following is based on many talks I have had with colleagues in the PA — in the West Bank and the Gaza Strip — in a bid to portray the new, unorganized model of the armed Palestinian struggle against Israel. I have talked with people from the PA, senior Palestinian security officials and with colleagues — veteran journalists and photographers — who have been covering the events for many years. Almost all of them agree that this is a new model stemming from total aversion toward the entire Palestinian political establishment as well as deep disappointment with the failure of the previous generation to deliver on its promises.

In the past, starting with the generation of stone-throwing children during the first intifada (1987-93), a young Palestinian seeking to climb up the social ladder would join one of the armed organizations, usually the one that controlled his district. The Izz ad-Din al-Qassam Brigades and the Islamic Jihad’s al-Quds Brigades, for example, promised any young man who joined their ranks salaries and social status, which would have otherwise been very hard to come by in the West Bank and Gaza Strip. Given the Palestinians’ dire conditions, social mobility by acquiring higher education or having financial stability based on trade and business were nearly impossible. The only option for a young Palestinian — whose father was unemployed and unable to provide for a large family — to claw his way out of this situation was to join one of the organizations, serve honorably in “the people’s army” and climb up in the organization’s ranks. The al-Qassam Brigades and al-Quds Brigade fighters, and the Fatah Hawks prior to that, were role models idolized by many youngsters.

So what has changed? Disappointment with the dysfunction of the PA, in general, and with Fatah, in particular, is deep-seated. This is a generation that is unfamiliar with the legacy of the late PLO leader Yasser Arafat and does not follow his ideas or beliefs. Neither does this young generation in the PA spare its criticism of Hamas and its members, whose prestige has considerably declined. Despite the attempts to depict the armed confrontations with Israel as victory, Hamas’ defeat in Gaza in 2014 has caused young people in Gaza and the West Bank to lose faith in the movement. Moreover, Hamas now appears to them as a beleaguered movement that is begging for its life and is courting Israel.

Young people I have spoken with over the phone this week told me that a policeman in the PA is considered in their eyes an idler and a servant on behalf of the collaborator Mahmoud Abbas. Once the landlords in the area, Fatah members are described as cowards and corrupt, who have long relinquished the armed struggle against Israel to enjoy benefits and perks. The most interesting description I have heard relates to the al-Qassam Brigades, which were once deemed the instigators and champions of the second intifada (2000-2005) and were revered by young people for their braveness and willingness to make sacrifices. They are not being accused of cowardice or corruption. Rather, they are being associated with the way Hamas tramples the rights of Gaza’s residents and instills fear in them.

For many young people, those who were born into the second intifada, none of these organizations — Fatah, Hamas or Islamic Jihad — is worthy of joining. This generation of young people is defying the old guard that promised statehood but failed to deliver. This young generation sees the previous one — even their own parents who caved in under the plight — as the one that did not have the courage to take destiny into its own hands and work for the future.

Not all the young Palestinian people are being driven into carrying out terror attacks against Israel, and not all of them support murdering Israeli civilians. However, this is the general atmosphere among the young generation in the PA, which believes that the only way to bring honor or glory is by setting out on a national rescue mission on their own to secure their families’ future.

All the young people I have talked with said it was better to die as a shahid (martyr) and national hero than to be a prisoner in a Zionist jail and wait for years to be released.

In the past, during the second intifada, when suicide bombers were sent to Israel, they were promised a life of eternity in the afterworld. Today’s lone-wolf terrorists going on a suicide mission armed with a knife think more about life in this world than about the benefits of the afterworld.

The main question is whether this wave can be stopped, and how. All the methods Israel employed during the second intifada, including targeted killings of militants and leaders, are presently ineffective. The new model of suicide terrorists leaves Israel with a narrow margin for operation, namely setting up obstacles and tighter security.

The biggest danger is that this act of defiance against the PA will turn into a tsunami that will undermine Mahmoud Abbas and the PA in its present format. If that were the case, Israel would remain alone vis-a-vis an entire generation of young people who are apparently deterred by nothing.