As long as the major Palestinian organizations resist taking the lead in the current wave of violence and Israel restrains itself, it is still possible to avoid another new intifada. 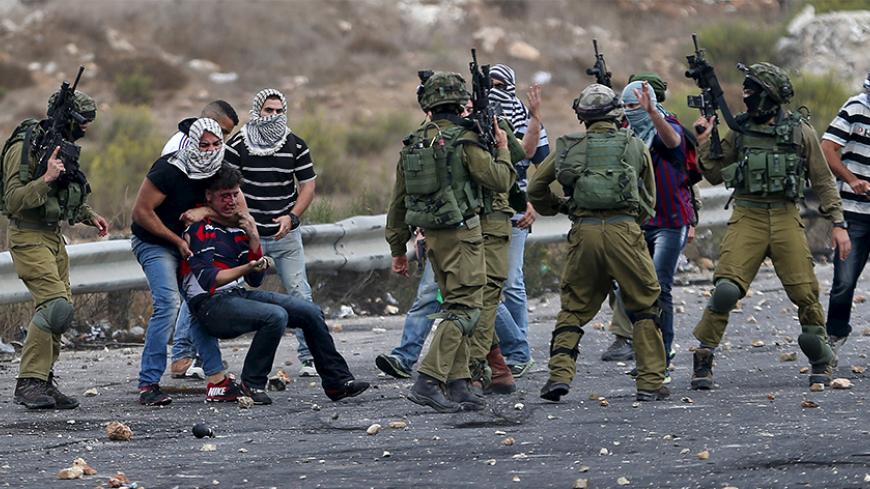 This is a rundown of some of the violent incidents in recent days:

A drive-by shooting took place on Oct. 1 near the settlement of Itamar. Terrorists opened fire at an Israeli family's vehicle, murdering Eitam and Naama Henkin from the Neria settlement. Their four children with them in the car were not injured.

Two days later, at the Lions Gate in the Old City in Jerusalem, Rabbi Nehemia Lavie from Jerusalem and Aharaon Bennett from Beitar Ilit were stabbed to death. Bennett's wife and toddler son were wounded. That same night, a 15-year-old was stabbed and moderately wounded in Jerusalem. Despite attempting to flee the scene, his attacker was subsequently killed by police who saw him with the knife in his hand.

In the early morning hours of Oct. 7, a Palestinian woman stabbed an Israeli near the Lions Gate. At noon, another Palestinian stabbed a soldier in the southern Israeli town of Kiryat Gat, grabbed his rifle and barricaded himself in a nearby apartment. He was killed by Israeli security forces. That evening, a Palestinian from the West Bank town of Dahariya stabbed a young man at the entrance to a shopping mall in Petah Tikva, a city east of Tel Aviv. During the night, two additional stabbing incidents were foiled at the Abu Tor neighborhood in East Jerusalem and at the Tapuach junction in Samaria.

On the same day, violent demonstrations were reported in the Arab neighborhoods of Jerusalem. Young people set fire to tires and threw stones. There was no quiet within the Green Line, either. In Jaffa, a bus was pelted with stones and in Lod, demonstrators threw stones at the police, wounding two officers.

Despite these and other incidents, senior Israel Defense Forces (IDF) officials are still convinced that this wave of violence is the work of lone wolves and not a full-blown intifada. This assessment is shared by Palestinian security officials as well.

The heads of the Palestinian security agencies adamantly claim that the violence can be contained, but to this end, Israel needs to demonstrate restraint in its reactions. These optimistic assessments are based mainly on the fact that the assailants, barring the cell that murdered the Henkins, had no guiding hand and did not use outside resources. Furthermore, Palestinian President Mahmoud Abbas is a pacifying factor working at full throttle to curb the violence.

Based on assessments by Israeli and Palestinians security officials alike, I noted previously in an article for Al-Monitor that the recent outbreak of violence was not indicative of a third intifada and that the reality on the ground is entirely different from the one that existed on the eve of the outbreak of the second intifada in 2000.

On the other hand, the recent wave of attacks, only some of which were listed above, cannot be overlooked. Analysis based only on past experience, that is to say the second intifada, might also be ill-advised. In other words, if it looks like a duck and walks like a duck, maybe it is time to call it one.

During the second intifada, from its outbreak in October 2000 and up to the Israeli disengagement from Gaza in August 2005, some 3,300 Palestinians and more than 1,000 Israelis were killed. The horrific suicide bombings that claimed the lives of so many began only when the Palestinian organizations started taking charge, controlling the intifada and running the conflict.

Prior to the visit of then-chairman of the opposition Ariel Sharon to the Temple Mount on Sep. 28, 2000, the Hamas movement was stuck. Its political and military leaders were locked up in Palestinian prisons. (They got out only after the IDF, following the lynching of two Israelis in Ramallah in October 2000, bombed Gaza and hit the prison, which was partially destroyed.) Hamas leaders straddled the fence, watching the events for several months from the sidelines. Back then, they thought that that was a political showdown between Prime Minister Ehud Barak and Palestine Liberation Organization Chairman Yasser Arafat that would end in a peace conference.

It was only when they realized that the rules of the game had radically changed that they re-established Hamas' military wing. At that point, Hamas took the lead of the intifada. Most of the Israeli fatalities during the second intifada were murdered by suicide bombers sent by the Izz ad-Din al-Qassam Brigades. Later they were joined by Fatah’s al-Aqsa Martyrs Brigades and the Islamic Jihad’s al-Quds Brigades. If those movements had not banded together, it stands to reason that the Israeli and Palestinian victims alike would not have reached such alarming numbers — thousands of fatalities and tens of thousands of casualties.

The same is true of the first intifada, which broke out in December 1987. It was only a few months after the first demonstration on Dec. 6 that Fatah’s supreme military command was established and headed by Ihab al-Ashqar, who received his orders and guidelines from the Tunis-based Arafat. The latter, as well as the newly-established Hamas movement, rode the coattails of the Palestinian demonstrations, appropriating the intifada to serve their own needs.

The 15th anniversary of the second intifada is approaching. Will organizations such as Hamas, Fatah or Islamic Jihad join the cycle of violence? If this happens, will it be possible to “contain” those events, too? Senior Israeli security officials as well as their Palestinian counterparts are convinced that given cooperation and understanding of the mindset on the ground, calm can be achieved.

And herein lies the key to everything. If Israel is able to deter the large Palestinian organizations by making them realize they would be better off not mobilizing their forces to lead and guide the violent events, mainly in the West Bank and Jerusalem, and if there is security coordination with the Palestinian Authority, calm might prevail. At this stage, only the Palestinian security forces can make effective pre-emptive arrests — provided that they are followed by appropriate diplomatic steps.

This depends, among other things, on the extent of Israel’s response. Military operations in the territories that create flashpoints in the Palestinian population in the West Bank would be counterproductive. Even the decision made by the political echelon to demolish terrorists’ houses has never proven effective. During the second intifada it was decided to stop demolishing houses because it became unquestionably clear that it did not stop suicide bombers. Rather, it was conducive to more tension and acts of revenge by family members or neighbors whose homes were razed.

The coming days may bring a watershed. One small mistake in judgment could cost many lives.