The Israeli prime minister is under pressure from the Israeli right as Israeli-Palestinian violence escalates; Syrian Kurdish leaders back Russian intervention to battle the Islamic State. 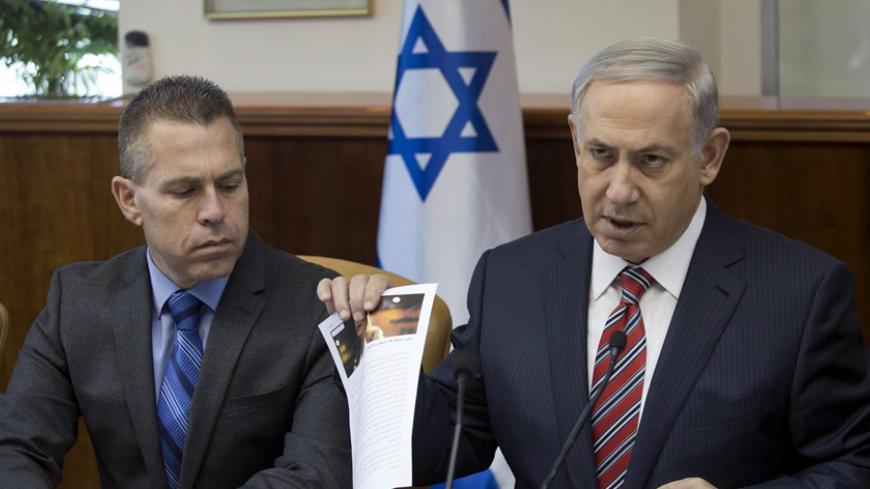 Hamas leader Ismail Haniyeh called for “strengthening and increasing the intifada” on Oct. 9, saying that “Gaza was ready for confrontation.” The surge in violence, which began last month in Jerusalem, spread in the past week to the occupied West Bank and Gaza Strip. On Oct. 9, Israel restricted access to the Al-Aqsa Mosque to prevent further confrontations. The Noble Sanctuary, including the Al-Aqsa Mosque and the Dome of the Rock, are revered by Muslims as the spot where the Prophet Muhammad ascended to heaven. The Temple Mount is the holiest site in Judaism, central to the Jewish faith as the site of two ancient temples, the first by King Solomon in 960 B.C.

Israeli Prime Minister Benjamin Netanyahu is under pressure from his right flank for his management of the crisis. Ben Caspit reports that Naftali Bennett and Ayelet Shaked from the HaBayit HaYehudi party and Yisrael Beitenu party leader Avigdor Liberman are calling for more aggressive actions, including new settlements and counterterrorism operations similar to those undertaken by Israel during the second intifada (2000-2002).

“At this stage, Netanyahu and Defense Minister Moshe Ya’alon are siding with the IDF [Israel Defense Forces], which is trying to 'contain' the events, to react with proportionate force, not to burn down their bridges and instead maximize the chances for cooling down the atmosphere. The problem is that under the explosive situation created on the ground, something can go wrong at any given moment or a terror attack can succeed, leading to deterioration. No one is really interested in an escalation, except for Hamas and other terror organizations. However, that does not mean that an escalation will not take place,” Caspit writes.

Mazal Mualem explains that “Netanyahu’s restrained behavior in the face of the current wave of terror suddenly puts him in the political center, with Bennett and Liberman to his right and [Isaac] Herzog and [Yair] Lapid to his left. As long as he manages to contain the violence, this situation of 'contained security tensions' will benefit him, shield him from diplomatic issues and make it difficult for the center-left to call for a renewal of negotiations. After all, the right will argue that there is no one to talk to now while we are being stabbed in the very hearts of our cities.”

Akiva Eldar laments the lack of “vision” by Netanyahu and other Israeli leaders for another familiar and ultimately tragic cycle of violence and escalation.

Shlomi Eldar suggests that Israeli-Palestinian security coordination may be the only means of preventing a further escalation of violence. He writes, “If Israel is able to deter the large Palestinian organizations by making them realize they would be better off not mobilizing their forces to lead and guide the violent events, mainly in the West Bank and Jerusalem, and if there is security coordination with the Palestinian Authority, calm might prevail. At this stage, only the Palestinian security forces can make effective pre-emptive arrests — provided that they are followed by appropriate diplomatic steps. This depends, among other things, on the extent of Israel’s response. Military operations in the territories that create flashpoints in the Palestinian population in the West Bank would be counterproductive. Even the decision made by the political echelon to demolish terrorists’ houses has never proven effective. During the second intifada it was decided to stop demolishing houses because it became unquestionably clear that it did not stop suicide bombers. Rather, it was conducive to more tension and acts of revenge by family members or neighbors whose homes were razed.”

Adnan Abu Amer reports that the Palestinian Authority presently has no plans to cease security cooperation with Israel.

Daoud Kuttab, however, writes of the increasing irrelevance of the Palestinian leadership, especially in the absence of any credible peace process: “The PLO factions — with the exception of Fatah — are largely irrelevant today. Public opinion polls show that supporters of various PLO factions rarely get more than a couple of percentage points of support. Islamic Jihad and Hamas, as well as remnants of the Fatah and other PLO militants, are under close scrutiny by both the Israelis and Palestinian security. This means that the protesters must be independent of formal organizations. … With each Palestinian killed or injured, the longevity of the protests is ensured. Another source of continuity of protests is the absence of hope. Without a credible peace process, it is impossible to pacify disillusioned, young and impressionable Palestinians who are the majority of the population.”

The Obama administration on Oct. 9 announced a shift in its Syria strategy, instituting a “pause” in the failed train-and-equip mission, and expanding its focus to “developing relationships with leaders and units [among Syrian armed groups], and being able to get them supplies and equipment as they are in the fight against [IS],” as explained by Ben Rhodes, deputy national security adviser for strategic communication, in a press call Oct. 9.

The new approach is widely considered as a boost to US military cooperation with Syrian Kurdish armed groups. Administration officials referred to the retaking of Kobani, which was led on the ground by Kurdish forces, as an example of success in the military campaign against the Islamic State (IS).

Ilham Ehmed, a senior member of the Democratic Union Party (PYD) of Syria, told Barbara Slavin that like the United States, Russia is also keen to work with Syrian Kurdish forces to combat IS. Ehmed added that the Russian military campaign is "a good step for the fight against terrorism but on the other hand, it is empowering the Assad regime, which is a bad point."

Last week, Salih Muslim, co-chair of the PYD, told Amberin Zaman that with regard to the Russian intervention in Syria, “We will fight alongside whoever fights Daesh [IS].”

Muslim’s position on the fate of Assad seemed to mirror that of the United States. Muslim said, “Russia sided with the regime from the very start. This is a separate matter. But as far as Assad remaining in power, we think differently. Assad cannot remain in power as before. He may stay on during a transition period, during a period of dialogue between the conflicting parties, but in the long term it seems inconceivable that the majority of the Syrian people would accept his leadership anymore.”

Muslim said Ahrar al-Sham is “no different” than Jabhat al-Nusra and IS, and shares the “same radical mentality” with the two terrorist groups, in contrast to the position of former US Ambassador to Syria Robert Ford and Ali al-Yassir in an article for the Middle East Institute in July 2015.

“[Jabhat] al-Nusra and Ahrar al-Sham are no different than IS. They are all terrorist organizations and share the same radical mentality. [Jabhat] al-Nusra is on the US [State Department’s] list of terrorist organizations. I don’t know if they [United States] will raise objections about Ahrar al-Sham, but they know who they are. There are no boundaries, no differences between the three groups. But if they were to be pushed out, the remaining opposition groups — which are very weak, including those that are fighting alongside us, that are attached to the Free Syrian Army — will be strengthened,” Muslim said.

Muslim said that Russia will prevent Turkish intervention in Syria and expressed skepticism and concern about Turkey’s intentions in Syria.

“Russia has a joint defense agreement with Syria. They will prevent Turkish intervention not to defend us [Kurds] but to defend Syria’s border,” Muslim said.

“Had Turkey taken the fight against IS seriously from the start, IS would not still be on Turkey’s borders. IS is massacring Kurds, forcibly evacuating the Kurds, burning their villages. Why is Turkey not doing anything; why is it unable to stop this? We have proposed to take care of it ourselves. Then why is Turkey standing in our way? You know there is this Turkmen brigade trained by Turkey called 'Sultan' something or the other. They all defected to Daesh. It was a total fiasco. … Should Turkey adopt a more moderate stand toward us, we as politicians are ready to talk and good things could ensue. But Turkish officials keep calling the PYD and the YPG [People's Protection Units] 'terrorists.' What kind of terrorism have we engaged in? … What we really want is to fight IS together with Turkey, America and the other coalition forces. Moreover, we are not opposed to a security zone. What we are opposed to is a Turkish-controlled security zone. The no-fly zones that were established in Iraq in 1992 could be applied in Syria as well. If the whole of northern Syria were under United Nations protection, we would feel more secure,” Muslim said.