PYD leader: Russia will stop Turkey from intervening in Syria

Speaking in an exclusive interview with Al-Monitor, PYD leader Salih Muslim says Russia will prevent Turkey from intervening in Syria. 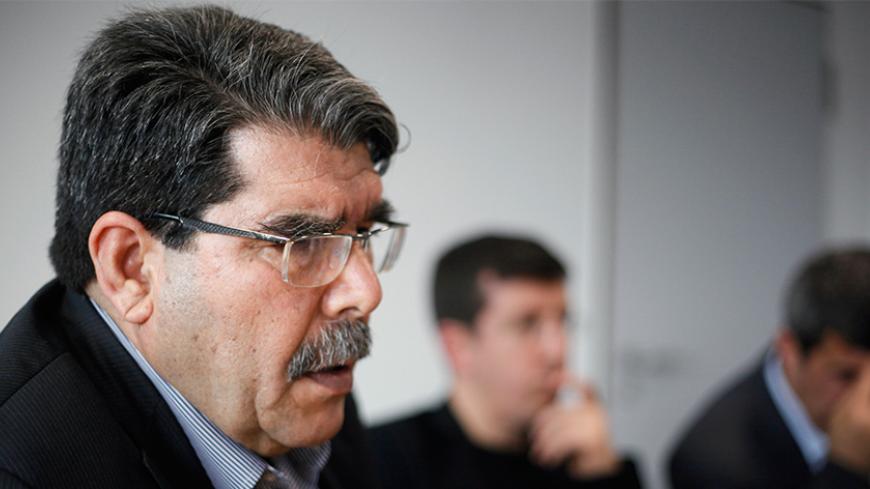 Salih Muslim, head of the Kurdish Democratic Union Party, is seen during a Reuters interview in Berlin, April 18, 2013. - REUTERS/Wolfgang Rattay

Russia’s stepped-up military intervention in Syria is poised to dramatically alter balances in the war-wracked nation. The one group that benefited most from the upheaval is the Kurds, which have steadily expanded areas under their control and are now top allies of the United States in the fight against the Islamic State (IS), also known as Daesh. What impact will the Russian moves have on Syria’s Kurds? Al-Monitor put the question to Salih Muslim, co-chair of the Democratic Union Party (PYD), who is currently in northern Syria.

Al-Monitor:  How does Russia’s military intervention in Syria affect the Kurds?

Muslim:  We as the Democratic Union Party believe the following, and we have shared this view with the United States as well: We will fight alongside whoever fights Daesh. We will stand alongside whoever battles the Daesh mentality.

Al-Monitor:  Russia also says that Syrian President Bashar al-Assad needs to remain in power and it is defending the regime.

Muslim:  Russia sided with the regime from the very start. This is a separate matter. But as far as Assad remaining in power, we think differently. Assad cannot remain in power as before. He may stay on during a transition period, during a period of dialogue between the conflicting parties, but in the long term it seems inconceivable that the majority of the Syrian people would accept his leadership anymore.

Al-Monitor:  But isn’t there a risk that the “transition period” could morph into a “permanent period”? Having achieved so many gains you would surely seek guarantees. Can Russia be a guarantor for the Kurds?

Muslim:  We have had relations with Russia for the past three years. We go back and forth to Russia, to Moscow. But the regime cannot remain as is nor can we turn back the clock. The Kurds are a reality. And we are capable of defending ourselves against the regime and others. If there is to be a resolution to the Syrian crisis, it needs to incorporate the rights of the Kurds and all other ethnic and religious groups in Syria. This could be achieved under the auspices of the United Nations. Our democratic autonomy [the three Kurdish-controlled cantons in northern Syria] needs to be recognized. And if they are not, we shall continue with our struggle. If the Kurdish problem remains unresolved, the Syrian problem will remain unresolved. We have certain demands, a system in place. Any solution that is predicated on eradicating these is wrong and cannot work.

Al-Monitor:  Do you believe that the Kurds could withstand Daesh without US military backing?

Muslim:  Perhaps our casualties would be higher, but we would be able to resist nonetheless. Above all, we have faith in our own people and the justness of our cause.

Al-Monitor:  Getting back to Russia, we are hearing reports that Russian planes are not just targeting Daesh but Jabhat al-Nusra and Ahrar al-Sham as well. How will America respond, in your view?

Muslim:  I don’t believe that America will object because [Jabhat] al-Nusra and Ahrar al-Sham are no different than Daesh. They are all terrorist organizations and share the same radical mentality. [Jabhat] al-Nusra is on the US [State Department’s] list of terrorist organizations. I don’t know if they will raise objections about Ahrar al-Sham, but they know who they are. There are no boundaries, no differences between the three groups. But if they were to be pushed out, the remaining opposition groups — which are very weak, including those that are fighting alongside us, that are attached to the Free Syrian Army — will be strengthened.

Al-Monitor:  Do you believe Russia’s intervention will help bring the sides to the table or has it made things worse?

Muslim:  Returning to the negotiating table seems hard. The plan devised by the UN’s Syria envoy, Staffan de Mistura, is backed most of all by Russia. But the opposite camp, meaning Qatar, Saudi Arabia and Turkey are resisting this [plan]. If the United States wants to pave the way for a solution, it must apply certain pressure on this camp. In any case, if there were not some kind of agreement between Russia and America, Russia would not have intervened in this way.

Al-Monitor:  What do Russia’s moves spell for Turkey?

Muslim:  Turkey’s Syrian policy is totally bankrupt. Two years ago I was talking to a Russian official and he asked me, “What do the Kurds most fear?” “Possible Turkish intervention,” I replied. He laughed and said, “That is not Turkey’s border [with Syria], but NATO’s,” to which I responded, “In that case you have given me relief, thank you.” Turkey cannot intervene in Syria without the blessings of the big powers.

Al-Monitor:  And how will the “IS-free zone” that Turkey wants to establish west of the Euphrates River along the so-called Mare Line be affected by Russian intervention?

Muslim:  Russia and the United States seem to have established their own zones of influence within Syria. The US is active in the north. The Russians will not meddle in the north. But should Turkey attempt to intervene, then they will. Russia has a joint defense agreement with Syria. They will prevent Turkish intervention not to defend us [Kurds] but to defend Syria’s border.

Al-Monitor:  What are the prospects for cooperation between Turkey and the Rojava administration?

Muslim:  Had Turkey taken the fight against IS seriously from the start, IS would not still be on Turkey’s borders. IS is massacring Kurds, forcibly evacuating the Kurds, burning their villages. Why is Turkey not doing anything; why is it unable to stop this? We have proposed to take care of it ourselves. Then why is Turkey standing in our way? You know there is this Turkmen brigade trained by Turkey called “Sultan” something or the other. They all defected to Daesh. It was a total fiasco.

Al-Monitor:  Are you saying there is no hope for normalizing relations with Ankara?

Muslim:  Should Turkey adopt a more moderate stand toward us, we as politicians are ready to talk and good things could ensue. But Turkish officials keep calling the PYD and the YPG [People's Protection Units] “terrorists.” What kind of terrorism have we engaged in?

Had they gone along with what we proposed to them two years ago [cooperation] everything might have been different today. Instead of coexisting fraternally, Turkey labels us enemies.

What we really want is to fight IS together with Turkey, America and the other coalition forces. Moreover, we are not opposed to a security zone. What we are opposed to is a Turkish-controlled security zone. The no-fly zones that were established in Iraq in 1992 could be applied in Syria as well. If the whole of northern Syria were under United Nations protection, we would feel more secure.

Al-Monitor:  Aren’t the Kurdistan Workers Party's [PKK] recent attacks against Turkey leaving you in a precarious position? Although you argue that you are separate entities, you are both inspired by the PKK’s founder, Abdullah Ocalan.

Muslim:  I don’t think it affects us militarily. We are separate organizations. But a resumption of the peace process in Turkey would be to the benefit of all. Any escalation of the conflict would be to the detriment of all. Aren’t the Kurds who embrace Apo’s [Abdullah Ocalan’s nickname] philosophy the ones who are the most effective fighting force against Daesh? When you attack them [the PKK], millions of Kurds feel they are being stabbed in the back. And they demand to know why the US and Europe are remaining silent. If they are serious about fighting Daesh, then wouldn’t they stop Turkey? There are such thoughts among the Kurds.

Meanwhile, a human tragedy is being played out. The body of Aziz Guler, a Turkish citizen who came to Rojava to fight IS, cannot be delivered to his family because Turkey won’t let it in. We cannot understand why. In the past, Turkish citizens who died in Rojava were handed over to their families and buried in their own country. This is no longer being allowed. Turkey has adopted this policy ever since the resumption of the conflict [with the PKK].

Al-Monitor:  You have problems with the Kurdistan Regional Government [KRG] in Iraq. KRG President Massoud Barzani says that he will open logistical supply routes from his region to Rojava only if you allow Syrian Kurdish fighters from the Kurdistan Democratic Party of Syria [KDP-S] to return. You met with President Barzani in Erbil recently and American officials were present at the talks, but you were unable to solve the problem. Why not?

Muslim:  There are no new developments regarding this matter. But here’s what we are proposing. If they [the KDP-S] are serious about defending the Kurds against Daesh, then they can come. Where is Daesh now? Between Jarablus and Azaz. Let them come and fight there. There is no Daesh left elsewhere in the Kurdish regions.