Why Turkey issued arrest warrant for this Kurdish leader

Ankara issued an arrest warrant for PYD leader Salih Muslim, which appears to be part of an all-out war against Rojava. But will it work? 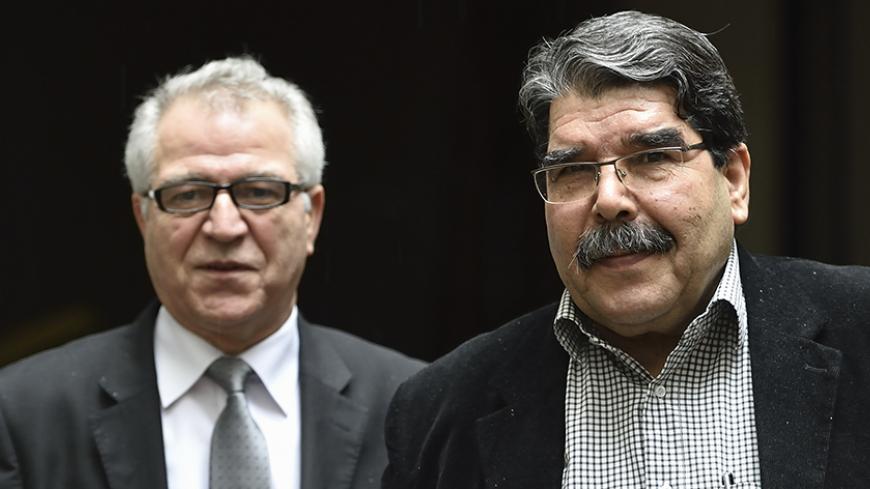 As Turkey continues with its stance in claiming the Kurdistan Workers Party (PKK) and actors in Rojava (the term Kurds use to refer to western Kurdistan in Syria) are one in the same, Co-chairman of the Democratic Union Party (PYD) Salih Muslim was accused of involvement in the Feb. 17 bomb attack in Ankara. Along with key PKK names, including Cemil Bayik, Murat Karayilan, Fehman Huseyin, Zubeyir Aydar and Remzi Kartal, now there is also an arrest warrant for Muslim.

Muslim is a Syrian citizen who was born in Kobani. Somebody in Ankara must be hoping that an Interpol red bulletin will enable Turkey to nab him in Prague, Berlin or Paris, and that he will no longer be addressing the European Parliament. Muslim is a Syrian Kurd who knows Turkey and speaks the Turkish language very well.

During the Syrian crisis, we encountered each other many times. We spoke at length and I interviewed him often.

On Feb. 22, 2015, when — because of the Islamic State (IS) threat — the issue of the Turkish army relocating the Tomb of Suleiman Shah, Turkey’s sovereign piece of land in northern Syria, to Eshme village near the Turkish border came up, Muslim was one of the unsung heroes of that operation. He had welcomed the unusual partnership that developed between imprisoned PKK leader Abdullah Ocalan, the Turkish Armed Forces (TSK) and the People's Protection Units (YPG) as the “Spirit of Eshme.” The TSK was terribly annoyed by that label.

Surprisingly, the strange cooperation actually worked. YPG fighters accompanied the Turkish military unit as far as the tomb under the coordination of Muslim and a few officials of the Rojava administration. The co-chair of the Kobani canton, Enver Muslim, and a YPG commander were hosted in Ankara for a few days to plan this operation. But the follow-up policies of Ankara after that operation squandered the opportunity for good neighborliness, and relations reverted to enmity.

Turkish officials consider Salih Muslim a PKK official and treat him accordingly. He has never concealed his affinity for Ocalan, but given his past activities and current leadership of the PYD, his profile is widely recognized. I interviewed him recently when I was working on my book, “Rojava: Time for Kurds.”

Perhaps a few excerpts will help explain why he has such wide recognition:

Al-Monitor:  We are told at one point you were associated with the Kurdistan Democratic Party [the KDP, party of President of Iraqi Kurdistan Massoud Barzani]. How come you changed tacks?

Muslim:  I am a villager born in 1961 at Seyran village 7 kilometers [4 miles] from Kobani. I did my secondary education in Syria, and in 1970 I began studying at the chemical engineering faculty of Istanbul Technical University. I graduated in 1977. First I went to London, and between 1978 and 1990 I worked in Saudi Arabia. I opened an engineering office in Aleppo in 1993. Politically until the 1970s, there was an uprising led by Mustafa Barzani [father of Massoud Barzani], and we sympathized with that.

Al-Monitor:  Were you politically active in the KDP?

Muslim:  No. We sympathized with their uprising, but we were not part of their organization. Then I got married. From Saudi Arabia I was following developments in Turkey in the 1980s. Because I knew Turkish, I could follow the news about the PKK.

Al-Monitor:  Did you have organic ties with the PKK?

Muslim:  No, I kept track of them as a patriotic Kurd. The PKK was the leading organization. When I was in Syria I met Abdullah Ocalan a couple of times in Damascus. My sympathies with the movement grew but did not go beyond that. I was active in social affairs, and we were discussing that it was time for us to set up our own organizations. The Syria Democratic Assembly that also included Arabs was a result of those debates. That organization was annulled in 2002, and we started to work on setting up the PYD. We had a popular base, and as long as Ocalan was in Syria that base grew. … We established the PYD on Sept. 20, 2003, as the party of Syrian Kurds.

Al-Monitor:  Ocalan’s expulsion from Syria led the way to the purge of Syrian Kurds with the Adana Accord signed between Syria and Turkey. PKK cadres were detained and handed over to Turkey. The PYD was set up to fill the vacuum. Doesn’t this mean the PYD was a continuation of the PKK?

Muslim:  We were not an extension of the PKK. Conditions in Syria are different in terms of the regime, the society and our relations with Arabs. Sure, we sympathized with other Kurdish organizations such as the PKK, but our goal was confined to Syria.”

When asked about the role of the PYD and the YPG in the Turkish army’s evacuation of the Tomb of Suleiman Shah, Muslim added, “Ask Mr. Sinirlioglu [the then-undersecretary of the Ministry of Foreign Affairs]. He has all the answers. They had a crisis room in Ankara. I was in Istanbul; I had their phone numbers. I was to call Kobani and intervene if needed, but that wasn’t necessary at all. Everything went smoothly. After the operation they called me and said, ‘We did it successfully. Thank you.’ Then I left Istanbul."

Muslim came to Turkey several times for unofficial contacts. He had a positive approach in all of our conversations, always emphasizing they wanted good relations with Turkey and would never be a threat despite the proxy wars waged by IS and Jabhat al-Nusra (which has since changed its name to Jabhat Fatah al-Sham). Don’t forget he is a father who lost a son in clashes with jihadi organizations that were being supplied from the Turkish border.

These warm messages were conducive to normalizing relations with related Kurdish communities and enabling Turkey to pursue a constructive line. But the government adopted a hostile stance and did not make use of the opportunity to make a clean start with the Kurdish communities.

While Turkey abandoned the peace process with the Kurds in Turkey and opted for a combative approach against them, it also introduced a multidimensional strategy for Rojava. On Aug. 24, the Turkish army entered the picture via Jarablus to fight IS. YPG-led forces were prevented from ousting IS from Jarablus after clearing them from Manbij. Ankara thus felt the Kurdish corridor was foiled. Turkey’s calculation for al-Bab and Raqqa are actually designed to paralyze the autonomy movement in Rojava.

Military interdiction and encirclement are accompanied by political and diplomatic offensives. Ankara has not been able to stop the PYD or the YPG from gaining international legitimacy. The Rojava autonomy movement has become a trusted partner of the United States against IS, and Muslim is frequently hosted by many EU bodies with which Turkey has relations.

He is warmly welcomed by political parties and civil societies in European capitals. Therefore, Turkey’s efforts to sideline the PYD haven't made headway. Actually, Ankara’s efforts are seen as efforts to eliminate a force that is fighting IS. As such, it is impossible for Turkey to make progress in its anti-PYD stance with the same strategy it applies against the PKK.

The table that will be set up to discuss a solution to the crisis in Syria will surely have a seat for Muslim. Will Turkey again issue its ultimatum that if the PYD is there, "we won’t be," as it did with the last Geneva conference? Will such an ultimatum yield anything for Turkey?