Salih Muslim, the leader of the Syrian Kurdish movement PYD, gives an exclusive interview to Al-Monitor on post-Mosul developments and Turkey's alleged support for ISIS. 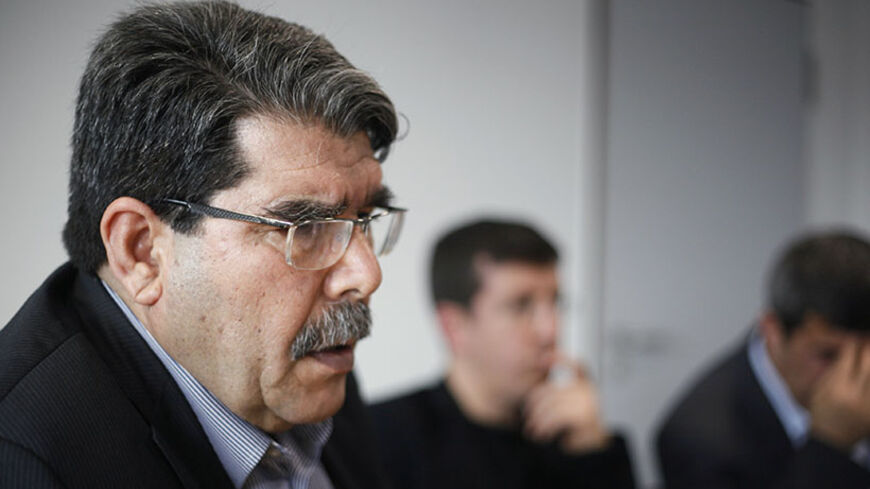 The mind-boggling gains of the Islamic State of Iraq and al-Sham (ISIS) in Iraq have caused tremors in the region. Among questions most heard nowadays is whether the Middle East map will be redrawn and where Turkey will be in that. Another question often voiced is the alleged role of Turkey in the empowerment of ISIS. There are allegations that militants coming from abroad to join ISIS pass through Turkey. There are even allegations that Turkey, in addition to its support of Syrian opposition groups, is also supporting ISIS.

Turkey’s Foreign Minister Ahmet Davutoglu vehemently denied such allegations and asked for proof. This is why we called on Salih Muslim, the co-chairman of Syrian’s most dominant Kurdish organization, the Democratic Union Party (PYD), who has been critical of Turkey on the ISIS issue. We asked him to back up his statements that Turkey has been supporting ISIS. Did he have any evidence of Turkey’s support of ISIS?

We had heard similar allegations recently from Syrian Kurdish militants of the PYD’s military wing, the People's Protection Units (YPG), which is fighting ISIS.

Didn’t ISIS, by occupying the Turkish consulate in Mosul and taking all its personnel hostage, blatantly contradict the charges that Turkey supports ISIS? Moreover, Turkey had added ISIS to its terror list in September 2013.

In the interview that follows, Salih Muslim answered Al-Monitor’s questions via Skype:

Al-Monitor:  Did Turkey support ISIS in the past?

Muslim:  What do you mean in the past? ISIS itself says it gets Turkey’s support. Its media gives details of how they get assistance from Turkey and how their militants reach them via Turkey.

Al-Monitor:  In your recent interviews you claimed that if not the government, the “deep state” of Turkey is assisting ISIS. There is a difference.

Muslim:  True. The Turkish state denies that it is helping ISIS. Whatever happens, it happens "without our knowledge.” But ISIS contradicts that. For example last week they said, “Two militants joined us through Gaziantep-Karkamis crossing.” I don’t think they would lie. Why should they?

Al-Monitor:  Let’s assume that Turkey turns a blind eye to ISIS activities in Turkey. If so, why did ISIS occupy the Turkish consulate and take all of its staff hostage? Isn’t this a contradiction?

Muslim:  I don’t know why they did it. Perhaps to assure the hostages' safety. Perhaps they were seized without their knowledge.

Al-Monitor:  Without whose knowledge?

Muslim:  Some groups within ISIS could have done it without informing the others. For their safety or to blackmail Turkey not to alter its moderate approach to ISIS. It could well be an agreed scenario. There are such possibilities.

Al-Monitor:  Leaving aside conspiracy theories, I ask again: Did the Turkish Republic in the past or today provide military or logistics support to ISIS?

Muslim:  Last summer at Serekaniye (opposite Turkey’s Ceylanpinar) we openly saw this support. Turkey was openly supporting ISIS. There are witnesses. At that time, Turkmens, Jabhat al-Nusra, the Free Syrian Army and Ahrar al-Sham all fought against us on the side of ISIS. But in the end, ISIS forced all of them out of the region. You wanted examples of their militants crossing Turkey. At the end of May, our forces attacked Al Rawiya village under ISIS control. We found Turkish documents on the bodies of ISIS militants we killed there.

Al-Monitor:  What kind of documents?

Muslim:  Various documents attesting to their presence in Turkey. Why are they attacking our Kurdish areas? If their goal is to liberate Syria from its regime, our areas are already liberated. Then, why are they still attacking us if not at Turkey’s behest? Why are we the targets when there are other targets and the regime?

Al-Monitor:  But Turkey says, “These (things) happen without our knowledge. We don’t support ISIS or any other armed group.” Don't you believe this?

Muslim:  Let’s assume it is not the official state that is assisting ISIS, but the “deep state” or other elements. In that case, why don’t Turkish officials investigate the evidence, documents and other data we have been providing to them? Why don’t they enter into solidarity with us against ISIS? There are so-called humanitarian relief organizations in Turkey that help ISIS. The Turkish government tells us millions of tourists come to Turkey and they can’t check all [of them] one by one. But we say, “We have proof. Those organizations meet them at the airport, take them to the border and across to Syria.” We have said all this but they don’t take action.

Al-Monitor:  In short, are you saying that although Turkey may not be actually helping ISIS, it turns a blind eye to its activities as well as to its supporters in Turkey?

Muslim:  Yes, that is what we are saying.

Al-Monitor:  How have recent developments in Mosul affected the Kurdish region of Syria, Rojava?

Muslim:  There were about 10 separate clashes between peshmergas and ISIS on the border. YPG units went to support the peshmerga. Although [Kurdistan Regional Government President Massoud] Barzani’s Kurdistan Democratic Party says they didn’t ask for such support, on the ground there was cooperation. We say that ISIS attacks in the Kirkuk area and against Shengal villages require coordination between Kurds. We are ready.

Muslim:  We are waiting. There are heavy clashes around Kirkuk. For example, at Jawlala ISIS is clashing with peshmergas. Until now, there was joint Kurdish action only at Tel Kocer. Besides that, YPG forces have not moved out of Rojava. There is massive ISIS deployment inside Syria, They have moved the equipment they took from Mosul to the Shedadiye base at Hassakeh. They can attack us any moment, but we are ready.

Al-Monitor:  The YPG is the force that fights ISIS most effectively in Syria. Did the Western countries notice this after the fall of Mosul? Have any Western governments contacted you since then?

Muslim:  No, none. They are still as if in shock. Nobody contacted us. There is nothing concrete.

Al-Monitor:  Did the Turkish government contact you? Turkey is under direct ISIS threat.

Muslim:  No. There was no such request.

Al-Monitor:  From time to time, we hear National Intelligence service (MIT) officials are meeting you. And at the moment one of your delegations is in Turkey.

Muslim:  There is no such contact with MIT at the moment. If there are secret things going on without our knowledge, I don’t know,

Al-Monitor:  In such a situation, your declaration of war against the [Bashar al-] Assad regime would be suicidal. That is what Turkey wants you to do. Turkish officials we spoke to claim that contrary to your pledges to do so, you have strengthened your relations with the Assad regime.

Muslim: That is a lie. We met in Istanbul with coalition forces [the Istanbul-based Syrian National Coalition]. The latest was the meeting of our representatives with coalition leader Ahmed Jarba in Paris. But even at that meeting they denied the existence of the Kurds. They don’t want to recognize the Kurds and the administration we set up at Rojava. Our most basic demand is recognition of Kurdish rights in the new constitution to be drafted. But they don’t even want to talk about it.

Al-Monitor:  But at the moment, one of your delegations is holding talks with the coalition in Istanbul.

Muslim:  True, but I am pessimistic about these talks.

Al-Monitor:  Let’s say the coalition accepts your demands. Would you then join the fight against Assad?

Muslim:  We already fought Assad when necessary. We kicked him out of the region. You want us to go to Damascus and fight. What do they want from us? We can’t send our young people to fight there. We won’t. We are only defending ourselves. That's it.

Al-Monitor:  But there are elements of the regime at Kamishli. I went and saw them.

Muslim:  Only at the airport. We don’t want to fight with Arab tribes there. We have Arabs among us, in our cantons. Are we to go fight them only because they are Arabs? We don’t want an Arab-Kurd war.

Al-Monitor:  The regime is not only at the airport. They have an intelligence office, a post office and several municipalities linked to the regime. There is substantial regime presence there.

Muslim:  Yes, there is one neighborhood of about 25,000 people that supports the regime. There are regime elements living there. If we touch any of them then we will have to fight the entire tribe. It will become a Kurd-Arab war.

Al-Monitor:  If the United States and Turkey declare a "no-fly" zone that covers Rojava, as they did in northern Iraq in 1991, will that make you feel at ease?

Muslim:  Of course it will. What is our goal? To defend our people. If somebody helps us doing that, welcome. But nobody is offering that.

Al-Monitor:  How is the economic situation in Rojava?

Muslim:  Bad. People have tough times finding food, fuel. All border crossings are closed. At one point, Turkey was allowing delivery of food assistance and the crossing of people to Kobani via Suruc. But that gate was closed 20 days ago. Nobody can cross now. We have sick people. And we have been fighting ISIS militants at Kobani for the past two days.

Al-Monitor:  What is going to happen in Iraq?

Muslim:  Iraq is heading for division. I don’t know whether it will be three separate states or a federative structure of three elements. But if ISIS continues to kill Kurds, this war will only spread.

Al-Monitor:  Can this war suck in Turkey?

Muslim:  Of course it can. Turkey is next door, You won’t know what ISIS has in mind. If they don’t like Muslims in Syria and slaughter them, imagine what they can do to the ones in Turkey.