Is Russia helping the US win in Syria?

Russian air power and Syrian forces are pounding terrorists and their allies, while taking a terrible toll on civilians; keep Turkey out of Syria. 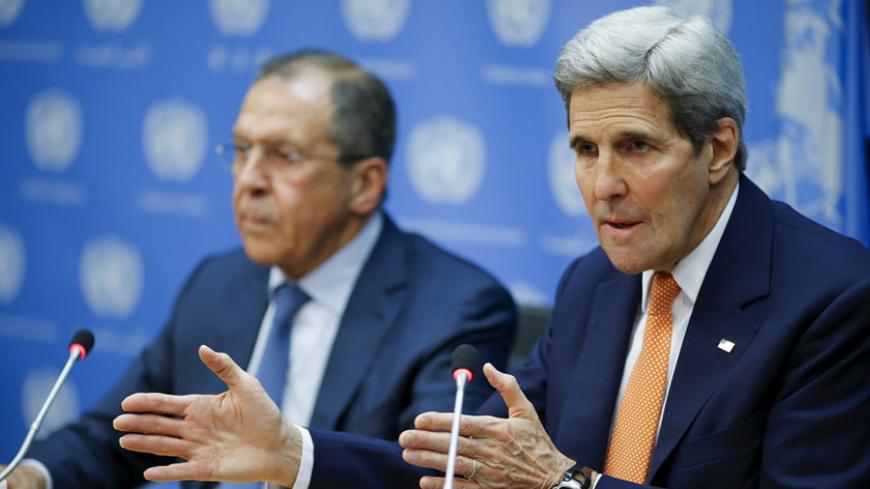 US Secretary of State John Kerry (R) speaks to the media next to Russia's Foreign Minister Sergey Lavrov during a news conference at the United Nations headquarters in New York, Dec. 18, 2015. - REUTERS/Eduardo Munoz

White House Press Secretary Josh Earnest said Feb. 4 that a recent US intelligence assessment showed a drop in numbers of those fighting on behalf of the Islamic State in Syria and Iraq from 31,500 to 25,000, a sign that the Obama administration’s strategy is working, as many of these foreign fighters seek a new base in Libya and elsewhere.

The second Week in Review column in December 2012 identified the role of Russia as one of the trends to watch regarding an endgame in Syria. The Russian trend is shaping a new phase in the Syrian war. As this column wrote last month, that endgame could begin with Aleppo, which is nearly encircled by Russian- and Iranian-backed Syrian government forces.

It might be fair to ask how much credit Russia should get in setting back not only IS, but al-Qaeda-linked Jabhat al-Nusra and its allies. Getting an answer might be difficult, however, for two reasons.

First, the Russian air campaign has been ruthless and often indiscriminate. The civilian costs of the war can understandably and rightly overshadow what we might call “strategic” gains. Mohammed al-Khatieb provides a firsthand account for Al-Monitor of a Russian airstrike on a school and the toll of the bombardment on civilians in towns surrounding Aleppo. US Secretary of State John Kerry has appealed to Russia to adhere to UN Security Council resolutions regarding the conduct of the war in Syria. We could not agree more.

Second, and more puzzling and problematic, is that many press accounts have referred to those armed groups on the receiving end of the Russian-backed Syrian offensive simply as “rebels,” implying these are all opposition groups backed by the United States and its Western allies.

Sam Dagher of The Wall Street Journal offered a more complete assessment Feb. 5, writing, “About a half-dozen cities and towns targeted in the new regime offensives have one thing in common: All were held by a mix of Islamist and moderate rebel groups funded and armed by Saudi Arabia and Turkey. Complicating the picture is that some, but not all, of these groups collaborate with the al-Qaeda-linked Nusra Front. That gives the regime and its allies fodder for their claim that they are fighting terrorism.”

This is a start, but there is more. A Feb. 5 report by the Institute for the Study of War shows the extent of the substantial Syrian military advances since Russia’s expanded military intervention. It also reveals that the Syrian government and its allies have battled IS, Jabhat al-Nusra and the radical Salafi group Ahrar al-Sham, which is often allied with Jabhat al-Nusra, in southern Aleppo province; battled IS in re-establishing a ground line of communication with the Quweires air base and in the Bab region; and battled Jabhat al-Nusra in the Latakia region.

Mustafa al-Haj explains that among the reasons that the Syrian military was able to retake Sheikh Miskin, north of Daara, after relentless Russian bombing, was “internal differences among opposition factions.” Haj reports from Damascus, “The Free Syrian Army (FSA) has been at odds with the Muthanna Movement (which had secretly pledged allegiance to the Islamic State in March 2015), as well as Jabhat al-Nusra, following attempts by the FSA to isolate radical Islamist forces, according to the pro-regime Al-Mayadeen news website. These factors weakened the factions’ resistance to the army’s attacks and hampered the entry of FSA fighters from other areas to assist in defending the city.” In other words, the FSA, IS-linked Muthanna and Jabhat al-Nusra were all targets of the Russian-backed regime offensive in Daraa.

Fehim Tastekin writes this week that Syrian Turkmen groups, which have been the target of Russian bombardment, “have developed close links with Salafi jihadi organizations such as al-Qaeda franchise Jabhat al-Nusra.”

So this is a more complex picture of what many in the mainstream media may be reporting about Russia’s intervention in Syria. It is worth recalling that “entities associated” with IS, al-Qaeda and Jabhat al-Nusra are also the target of UN Security Council Resolution 2254 (2015), and that a cease-fire “will not apply” to actions against these “entities.” Resolution 2254 reiterates that member states should “prevent and suppress terrorist acts committed specifically by the Islamic State in Iraq and the Levant (ISIL, also known as Da’esh), Al-Nusra Front (ANF), and all other individuals, groups, undertakings, and entities associated with Al Qaeda or ISIL, and other terrorist groups, as designated by the Security Council, and as may further be agreed by the ISSG and determined by the Security Council, pursuant to the Statement of the ISSG of 14 November 2015, and to eradicate the safe haven they have established over significant parts of Syria, and notes that the aforementioned ceasefire will not apply to offensive or defensive actions against these individuals, groups, undertakings and entities, as set forth in the 14 November 2015 ISSG Statement.”

Turkey’s policies in Syria continue to border on the reckless, so excuse our skepticism on how the introduction of Turkish troops could play a constructive role, especially as President Recep Tayyip Erdogan risks escalation with Russia over alleged airspace violations. Ankara claimed that a Russian plane had violated its airspace Jan. 29. Metin Gurcan explains that the alleged Russian violation took place on “the Turkish border region that faces the Azaz-Munbij front, which is currently controlled by the Islamic State. If this is accurate, Russia is telling Turkey openly that it seriously intends to maintain the de facto no-fly zone it has established over the Jarablus-Munbij areas, which are also of major concern for Turkey.”

Semih Idiz reports that “developments in northern Syria are aggravating tensions between Ankara and Moscow. Following the downing of its jet, Russia intensified its air campaign, particularly against the Turkmens, but also against radical Islamic groups supported by Turkey, Saudi Arabia and Qatar that are fighting the Syrian army. Russia has a particular ax to grind with the Turkmens because it was their fighters who killed the Russian pilot in his parachute after he ejected from the Su-24. Turkmen refugees have started entering Turkey as the Syrian army gradually takes control of the region with Russian air support. … Russia has an added incentive now to support the PYD [Democratic Union Party] and hit Turkey in its most sensitive spot, namely the Kurdish issue. Russia says it is unthinkable that the PYD can be kept out of the Geneva talks and insists the group will be part in these talks in the future. Meanwhile, the Turkish media is reporting that Russia had started to provide air support to the PYD’s military wing, the People's Protection Units (YPG), west of the Euphrates River.”

Fehim Tastekin writes that Turkish ultranationalists have rallied to the Syrian Turkmen camp, whose armed groups have links to Jabhat al-Nusra. Tastekin concludes, “Many opposition groups labeled the Free Syrian Army have in time shifted to a Salafi mindset. How the war will transform Turkey’s ultranationalists is an important question. … This will inevitably leave a residue.”

Knowing all we know, the United States should therefore be adamant in rejecting any Saudi or Turkish offer to send its forces to Syria, if there is any seriousness to these offers.

And who would they be fighting against — IS? The Syrian Kurds who are allied with Russia and the United States? Or Russia itself, risking a NATO intervention?

We recognize the burden Turkey has assumed by providing relief to over 2.2 million Syrians, with tens of thousands more seeking entry. Turkey, Jordan and Lebanon deserve our thanks and assistance in managing this overwhelming humanitarian crisis, which received a commitment of over $10 billion from international donors last week. But if Turkey wants to further step up in Syria, it should stand down in its confrontation with Russia, and take unambiguous steps targeting IS, Jabhat al-Nusra and affiliated forces, as called for in UN Security Council resolutions.