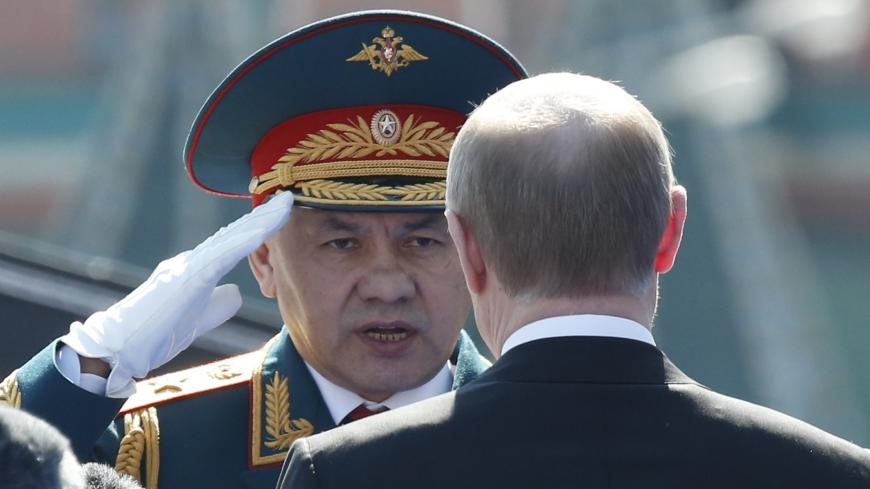 Russian Defense Minister Sergei Shoigu salutes in front of President Vladimir Putin at the Victory Day parade marking the 71st anniversary of the defeat of Nazi Germany in World War II, at Red Square in Moscow, May 9, 2016. - REUTERS/Grigory Dukor

US should consider Russian offer

Russian Defense Minister Sergei Shoigu suggested May 19 that Russia and US-led coalition forces should undertake “joint action … to plan and conduct strikes against Jabhat al-Nusra, which does not support the cease-fire, as well as against convoys of arms and fighters crossing the Syrian-Turkish border.”

Jabhat al-Nusra Front is al-Qaeda’s affiliate in Syria and an outlier to the UN-mediated political talks and cessation of hostilities. The peace talks and cessation, including UN Security Council Resolution 2254, are the result of US-Russian collaboration and leadership, which has produced the best hope, to date, of ending the more than five-year war.

Shoigu’s offer is in line with UN Security Council authorities on Syria. There are numerous resolutions targeting Jabhat al-Nusra and penalizing parties that support it. Resolution 2254, for example, calls on “Member States to prevent and suppress terrorist acts committed specifically by Islamic State in Iraq and the Levant (ISIL, also known as Da’esh), Al-Nusra Front (ANF), and all other individuals, groups, undertakings, and entities associated with al-Qaeda or ISIL, and other terrorist groups … and to eradicate the safe haven they have established over significant parts of Syria, and notes that the aforementioned cease-fire will not apply to offensive or defensive actions against these individuals, groups, undertakings and entities.”

Jabhat al-Nusra, perhaps as a result of Russian and US airstrikes, has intensified its own attacks throughout Syria, in direct violation of the cease-fire, sometimes in collaboration with other Salafi groups. Most notably, the al-Qaeda affiliate is reportedly seeking to establish its own "emirate" around Idlib and is wooing Salafi fellow travelers to its cause. Jabhat al-Nusra and Ahrar al-Sham jointly attacked the Alawite village of Zara in Hama province May 12, massacring 19 civilians.

It would seem, then, that Moscow’s suggestion to combine efforts against Jabhat al-Nusra might at least get a fair hearing from the United States. But Pentagon spokesman Jeff Davis dismissed the offer May 20, saying, “We do not collaborate or coordinate with the Russians on any operations in Syria. Russian operations are supporting and enabling the Assad regime and our focus is solely on degrading and defeating [IS]," adding that the United States had not received a formal proposal from Moscow.

For our part, we find the Russian offer, at a minimum, worth exploring, and would encourage steps toward joint action. The United States and Russia are aligned, in accordance with numerous UN Security Council resolutions, in efforts to defeat Jabhat al-Nusra and IS. Former Secretary of Defense William Perry, California Gov. Jerry Brown and former Georgia Sen. Sam Nunn have proposed greater US-Russian intelligence coordination and plans for concrete actions to prevent al-Qaeda, IS and other terrorist organizations from obtaining fissile material to develop nuclear weapons.

There is no viable political settlement or cessation of hostilities in Syria without an eventual military defeat of both organizations. The United States has been concerned about Russia's targeting of US-backed moderate opposition forces; more intensive cooperation could help, or at least put Moscow to the test. This column said in September 2015, “The United States should welcome and coordinate Russia’s efforts against the common enemy. This is overdue. And it does not mean 'giving in' on Assad, but rather playing it smart, getting Russian and Iranian support for a negotiated political transition on the front end, and dealing with the Syrian president on the back end.”

There are others who argue that the better course in confronting Jabhat al-Nusra is yet another ramp-up of support for the "moderate" Syrian armed groups. The question is why this second round would be any different from the previous $500 million train-and-equip effort that failed. While the United States should indeed support secular forces in Syria, our assessment is that absent coordination with Russia, this would only serve to escalate confrontation among armed groups, undermine the cessation of hostilities, blow up the peace talks, provide incentive for even more radical organizations and jihadi recruits to rush in and deliver another crushing blow to the faint hopes of Syrians for an end to the war.

The United States has blocked a Russian initiative to have Ahrar al-Sham and Jaish al-Islam designated as terrorist groups, despite the Salafi groups’ record of atrocities and collaboration with Jabhat al-Nusra (such as the massacre in Zara this week), apparent cessation violations, and an extremist ideology indistinguishable from al-Qaeda and IS. A State Department representative said that both groups are “parties to the cessation,” although we believe that is questionable, given their collaboration with Jabhat al-Nusra and participation in armed operations during the cessation.

This column has warned since December 2013 about mainstreaming extremist Salafi groups, which are neither indigenous to Syria nor parties to the genuine Syrian uprising of 2011. We have advocated excluding Ahrar al-Sham and Jaish al-Islam from the Syrian peace process, with appreciation of the complexities of doing so, given the assets they control on the ground and the support these groups have received from Turkey, Qatar and Saudi Arabia. They are, in our score, however, antithetical to the most minimal vision of a post-conflict Syria as secular, nonsectarian and independent.

Meanwhile, McClatchy reported May 21 that Labib al-Nahhas, Ahrar al-Sham’s foreign affairs director, visited Washington in December 2015 to meet with think-tank experts and lobbyists on how to position his group for influence among US policymakers. This should, on its face, be somewhat scandalous, given Ahrar al-Sham's record and ideology. Nahhas penned a conciliatory op-ed in the Washington Post in July 2015. Some Washingtonians have made the case that Nahhas’ feint toward relative moderation may be an opportunity for the United States to gain influence and exploit alleged divisions within the Salafi group. Leave us out of the dead-end Kremlinology-like analysis of whether "we can work with" Ahrar al-Sham. It is a matter of record, not speculation, that Ahrar al-Sham and Jaish al-Islam have flourished and "commingled" with Jabhat al-Nusra, as well as committing sectarian atrocities of their own. And by the way, an ally of al-Qaeda — even just a sometime one — should be a nonstarter.

Ali Hashem writes this week that the death of Hezbollah commander Mustafa Badreddine is a major setback for the Lebanese organization and likely lead to greater centralization of authority by Iran on the Syria battlefront.

Hezbollah has said that Badreddine was killed May 13 as a result of “artillery bombardment carried out by takfiri groups.”

Hezbollah leader Hassan Nasrallah said May 20, “Until today, the martyrdom of any of our leaders has not pushed us to leave any battlefield and Badreddine's blood will push us to a bigger presence in Syria. … We will remain in Syria and more leaders will go into Syria.”

Hashem concludes his analysis and profile of Badreddine by saying, “To Hezbollah, Badreddine isn’t someone who can be replaced the next day, given his history, understanding and influence inside the organization. Yet, the number of commanders slain during the Syrian war has given the group the experience to endure such hits with the fewest possible effects.”