US should ditch 'plan B' for Syria

UN Syria envoy Staffan de Mistura says the fragile cessation of hostilities “continues to give hope” as Syrians anticipate the battle for Aleppo. 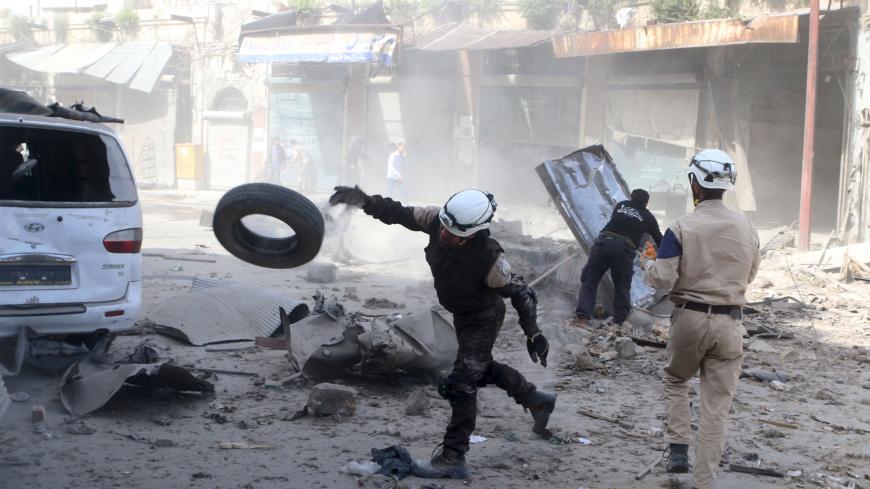 The failure to date of Turkish-backed Syrian armed groups to retake the Syrian border town of al-Rai from the Islamic State (IS) should be a warning to US intelligence officials reportedly preparing a “plan B” for Syria, should the cessation of hostilities collapse.

According to The Wall Street Journal, the Central Intelligence Agency and its regional partners are drawing up plans to provide more advanced arms, possibly including anti-aircraft weapons, to Syrian opposition forces as a contingency plan. Old habits and bad ideas seem to die hard in some Washington policy circles. One might recall, for example, the failure of the ill-fated initial train and equip mission, which cost $382 million to train 180 fighters, 95 of whom are reportedly still active. But instead of coming to a reasonable conclusion of "been there, done that, that didn’t work," for many understandable reasons, the CIA is consulting with Turkey and Saudi Arabia on a scheme to ramp up the capabilities of Syrian proxies, which would of course be devastating for the Syrian people who have enjoyed a mild reprieve from the bloodbath of the past five years, as Mohammed al-Khatieb reported from Aleppo last week.

The divide between the United States and Turkey over the role of Syrian Kurdish groups has further complicated the campaign against Jabhat al-Nusra and IS in northern Syria, and is a major reason why a plan B would fail.

Fehim Tastekin writes that the Turkish-backed operation in al-Rai has turned into a “fiasco.” The weeklong campaign has so far gone poorly, with IS putting up a fierce defense. The plan appears to have been hatched after Turkish President Recep Tayyip Erdogan appealed to US President Barack Obama to back off support for the Syrian Kurdish People’s Protection Units (YPG), the leading force in the Syrian Democratic Forces (SDF), and instead work through armed groups linked to the Turkish National Intelligence Service, “a composite force of Turkmens, Free Syrian Army factions and Salafists,” according to Tastekin.

Turkey’s Syria policies will only become more problematic as there is little or no hope for a "cessation of hostilities" with the Kurdistan Workers Party. Metin Gurcan writes, “The milder meteorological conditions will allow the Kurdistan Workers Party (PKK) to become more mobile. With improved logistics support, the PKK could integrate its urban units, which have been operating independently, and transform them into a regional force and escalate fighting. Security forces, which are aware of these realities, are frantically preparing. Security officials in Ankara expect multiple, simultaneous PKK operations on the ground or actions in the cities at the end of April. Ankara has reacted by increasing the number of special operations teams trained in urban warfare, appropriate vehicles and weaponry.”

Tastekin concludes, “Turkey’s tactical moves designed to keep the YPG away from the area are impeding a real and meaningful struggle against IS. The expectation is that if the Kurds and their Arab allies move against Menbic, Turkey will arrange for a repeat of the al-Rai offensive. If the Syrian army succeeds in the “Great Aleppo War,” the northern front will be even more complicated, so much so that even Turkey won’t be able to cope with it. Then, the 'with Kurds or without Kurds' debate will become irrelevant.”

Despite the leaks of a plan B, UN Syria envoy Staffan de Mistura is not ready to write off progress since the US-Russian agreement in February, despite a breathless report in The Washington Post on April 14 about the “apparent collapse” of the cessation of hostilities. At the start of a new round of Syrian peace talks in Geneva, de Mistura told reporters April 13, “We need to make sure, at any cost, that the cessation of hostilities, in spirit and in substance, continues to give hope to the Syrian people, because that is what made all of them believe that, in fact, even if they have to wait for the intra-Syrian talks, their lives are at least improved.”

Laura Rozen reports that US concerns about the challenges to the cessation of hostilities are in part the result of disputes over the targeting of Jabhat al-Nusra in and around Aleppo by the Syrian military and its backers, especially Iran and Russia, as some of the armed groups supported by the United States and its regional partners are in close proximity to Jabhat al-Nusra, which is al-Qaeda’s affiliate in Syria.

The relationship and proximity of other Syrian armed groups to Jabhat al-Nusra is a matter of some urgency. UN Security Council Resolution 2254 reiterates that the cessation of hostilities does not apply to Jabhat al-Nusra “and all other individuals, groups, undertakings, and entities associated with al-Qaeda or [IS].” This column has zero tolerance for those who run with al-Qaeda, even if for tactical reasons or a shared hatred of Syrian President Bashar al-Assad. Plan B, in our score, should be kept on the shelf for good, if not a candidate for the shredder. The thought of advanced arms, including anti-aircraft weapons, falling into the possession of sectarian Salafi groups such as Jaish al-Islam and Ahrar al-Sham, which are fellow travelers with Jabhat al-Nusra, and are backed by Saudi Arabia and Turkey, should be something to be avoided, not discussed.

The bottom line is that the US-Russia partnership on Syria is mostly working, and is Syria’s best bet for an end to the war. Rather than a plan B, a better approach would be to build on what is working and establish a mechanism for both monitoring potential cessation violations, which is under discussion, and enhanced intelligence coordination among the United States, Russia and its regional partners in the International Syria Support Group about Jabhat al-Nusra and IS, especially in and around Aleppo, in anticipation of a likely offensive to retake the city, which would be a turning point in the war.

Kamal Sheikho reports from Kobani that “the latest military movements by the SDF and armed Syrian opposition factions in northern Syria aim to cut off the supply route to IS, which links the eastern and northern Aleppo countryside to Raqqa, and to bottleneck IS militants by cutting off the remaining border passages with Turkey. Analysts and experts in Syrian affairs believe it is likely for the coming days to witness heated and decisive battles between conflicting parties, changing the balance of power in favor of the forces fighting IS.”

As we wrote in January, “If the Syrian army, backed by its Iranian and Russian allies, retakes Aleppo, the city’s liberation will come by directly defeating terrorists and armed groups that are already deserting the battlefield. A government victory would be of a different order and have a different impact than the negotiated departures of besieged armed opposition forces in Homs and around Damascus. The people of Aleppo would experience a flat-out victory by the government and a defeat, and exodus, by the armed groups. … A Syrian government victory in Aleppo could be the beginning of the end of the sectarian mindset that would have been alien to the city prior to 2011. There is no more appropriate city to begin Syria’s healing. A Syrian government victory in Aleppo will make it harder to rationalize Western backing for jihadi groups that want to keep up the fight against long odds in the rest of the country. IS and al-Qaeda may prefer, over time, to begin to relocate to Libya and other countries where they can avoid the pounding from the US-led anti-IS coalition and Russian- and Iranian-backed Syrian forces. This may already be happening, and if so, it is to be cheered by those who seek a unified, secular and nonsectarian Syria, as outlined in the Vienna Communique, and as is Aleppo’s tradition.”