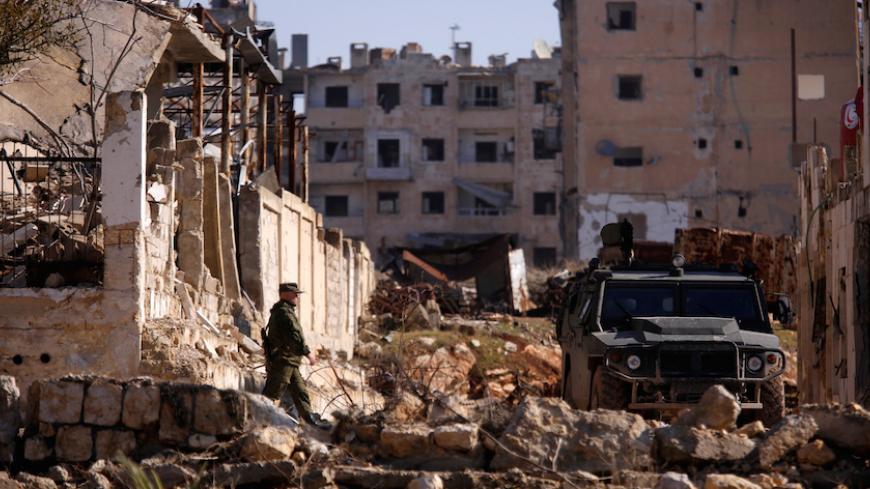 A Russian soldier walks to a military vehicle in the government-controlled Hanono housing district in Aleppo, Syria, Dec. 4, 2016. - REUTERS/Omar Sanadiki

Cengiz Candar writes, “The fate of Aleppo has the potential to seal the fate of [President Recep Tayyip] Erdogan's regime in Turkey. Too many of Erdogan's eggs are placed in the basket of northern Syrian geopolitics, and most of them are likely to crack.”

In other words, Turkey’s Syria policy, which since 2011 has facilitated the rise of jihadi groups allied with Jabhat al-Nusra, al-Qaeda’s largest affiliate ever, may be on the brink of collapse, along with those remaining Jabhat al-Nusra terrorists in Aleppo who are holding the besieged citizens of the city hostage under brutal bombardment by the Syrian military and its allies.

On Dec. 1, United Nations Special Envoy for Syria Staffan de Mistura again called for Jabhat al-Nusra fighters to leave the city, saying that their departure “will contribute to avoiding bloodshed and increase our leverage on insisting for an urgent pause.”

A series of quick victories by Syrian military and pro-government forces against Turkish-backed armed groups in Aleppo last week compelled Erdogan to declare on Nov. 29 that his country’s military had entered Syria to “put an end to state terror and to [Syrian President Bashar al-] Assad’s rule,” upsetting, for the moment, fragile negotiations over Aleppo, according to the Financial Times.

Erdogan’s outburst, which appeared to be a mix of frustration and fantasy, necessitated a call the following day with Russian President Vladimir Putin, after which the Turkish president clarified his earlier remarks when he “publicly declared that the target of the Turkish-led Operation Euphrates Shield in northern Syria was 'not a particular country or individual' but 'solely terrorist organizations,'" allowing the Aleppo talks to resume, as Amberin Zaman reports.

Fehim Tastekin explains that “what makes Erdogan’s anger understandable is the reality that armed groups losing ground in Aleppo will retreat to the Turkish border. What these tens of thousands of heavily armed, combat-trained militants will be doing at the Turkish border is the most vital question of the scary scenario. Looking at the Syrian regime’s game plan, this is what one sees: The Syrian army is facilitating the armed rebel groups to withdraw to the Turkish border by providing bus transport to carry the militants northward from areas they gave up.”

Erdogan, anticipating the Syrian government’s victory in Aleppo, had already backed off its support of armed groups there in return for acquiescence, especially by Russia, of Turkey’s objectives in Operation Euphrates Shield, which was launched in August to defeat the Islamic State (IS), push the People’s Protection Units (YPG) east of the Euphrates River and establish a safe zone on its border.

Turkey nonetheless continues to lose in Syria. Semih Idiz writes, “Turkish-backed Free Syrian Army (FSA) militias, Ankara’s main proxy in Syria, have been unable to muster a serious attack against al-Bab. The situation grew militarily complicated for Turkey after its jets began striking YPG targets in the area — resulting in the United States withdrawing air support for FSA and Turkish forces — and after Russia and Syrian regime forces made serious headway against the FSA in Aleppo, to which al-Bab provides access.”

Candar writes, “With the impending fall of Aleppo, taking al-Bab seems more difficult than ever. Moreover, the Turkish military around al-Bab suffered casualties from an air attack, for the first time ever, presumably by the Syrian air force. Some claim that it might have come from Iranian drones. But many observers noted the attack coincided with the first anniversary of Turkey's downing a Russian jet, therefore giving way to speculation that the Russians are behind the Turkish casualties around al-Bab. Whatever the truth, Turkish military activity seems to be restricted in the area stretching from the eastern approaches of Aleppo to al-Bab, and from there farther east to Manbij and Raqqa.”

Metin Gurcan adds that Erdogan’s plans may be further complicated by the abduction of two Turkish soldiers by IS fighters on Nov. 29.

Idlib is the likely next target of the Syrian offensive, which will deepen Turkey’s Syrian quagmire. Tastekin adds, “Local sources think it is very likely that Hezbollah and [Hezbollah al-] Nujaba will launch an offensive from the south while the Syrian army and its allied militias simultaneously mount a major operation from the north. That will be the onset of Turkey’s nightmare scenario. Ankara will either hold on firmly to the de facto buffer zone it created from the Kilis border to north of al-Bab and turn the rural terrain around Idlib into a safe zone for its allied groups, or they will allow the Syrian army to reach the Turkish border. In both cases, the Turkish border will heat up and Turkey will also have to deal with the jihadi heritage that could spill over the border.”

Idiz observes that Turkey’s flailing Syria policy has put it at odds with both the United States and Russia. “The bottom line,” Idiz writes, “is that Turkey not only faces IS and the YPG in Syria, but Russia and the United States as well. Given this, many argue that Erdogan is unaware of what he is up against as he tries to please his supporters with promises he will most likely not be able to keep.”

Candar adds, “When it comes to Syria, Erdogan might be more at the mercy of Russia than ever. Turkey's ambitious objectives to deprive Syrian Kurds of autonomy could equally depend on how Putin recalibrates his new relations with Erdogan, and on the Americans.”

In a related development, the final version of the annual National Defense Authorization Act, passed by Congress, will provide the Trump administration with the authority to provide man-portable air-defense systems (MANPADS) to Syrian armed groups, with restrictions, as Julian Pecquet reports. The weapons can only be provided if requested by the president, and even then they would only be provided subject to fairly restrictive technical and vetting conditions. The provision is a victory for US Sen. John McCain (R-Ariz.), the chairman of the Senate Armed Services Committee, who had consistently argued for an increased militarization of the Syria war by backing armed groups opposed to Assad.