Why are the flames of Aleppo burning Turkey?

As they continue to suffer defeats, Syrian opposition forces are being pressed back against the Turkish border, signaling yet another nightmare in the making. 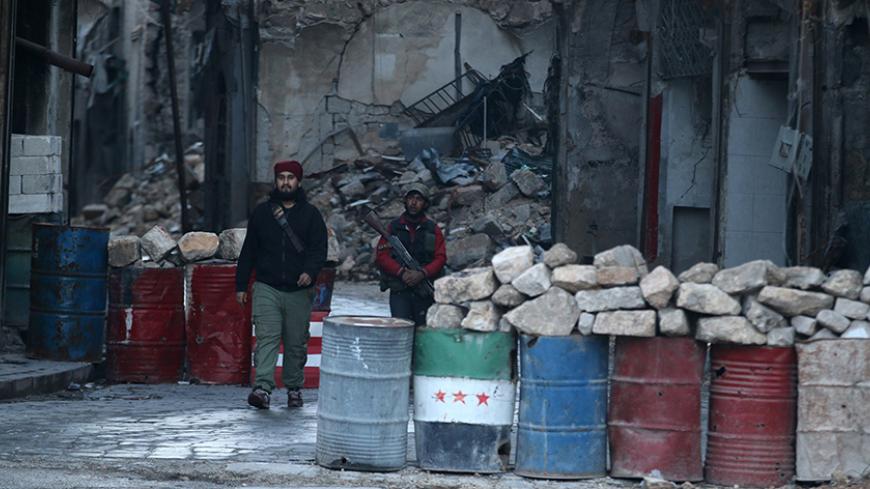 Turkey, which has made Aleppo the key to toppling Syrian President Bashar al-Assad’s regime, is gearing up for the worst-case scenario now that the armed opposition groups it has been supporting have suffered a series of setbacks.

The scenario that is emerging is that the defeated groups, which are supported by the West, Turkey and the Gulf states, are being pushed north to the Turkish border. Initially, part of Turkey's design to create a buffer zone in northern Syria was to open up space for victorious armed groups north of Aleppo. Now, everyone is trying to make some sense of Turkey's moves.

Since Turkey launched Operation Euphrates Shield, Ankara has been unusually quiet about heavy pressure against the armed groups besieged in Aleppo. Turkey had said its objectives in Euphrates Shield were to clear the Islamic State (IS) from the border region and to prevent the Kurds from forming a corridor along Turkey's border.

Russia and Syria had given Turkey the green light to move south from the border towns of Jarablus and al-Rai toward al-Bab. The arrangement was for Turkey to end its logistics support to the Aleppo groups in return for getting maneuvering space near its border. But when Turkey expanded its operations beyond the agreed-on area, the green light turned to red and both the Turkish army and Turkish-supported groups became targeted by regime forces.

When rebel groups lost 12 neighborhoods in Aleppo in two days, Turkish President Recep Tayyip Erdogan had to say something. “We were patient, but at the end we couldn’t endure this and were forced to enter Syria with the FSA [Free Syrian Army]. Why did we enter? We don’t want Syrian land. … We entered to put an end to state terror and to Assad’s rule,” he said Nov. 29 at the Inter-Parliamentary Jerusalem Platform Symposium.

What did he mean by these remarks?

Of course, it is totally irrational to think that Turkey will engage in a war with Syria while Russia has such a heavy presence on the ground.

What makes Erdogan’s anger understandable is the reality that armed groups losing ground in Aleppo will retreat to the Turkish border. What these tens of thousands of heavily armed, combat-trained militants will be doing at the Turkish border is the most vital question of the scary scenario.

Looking at the Syrian regime’s game plan, this is what one sees: The Syrian army is facilitating the armed rebel groups to withdraw to the Turkish border by providing bus transport to carry the militants northward from areas they gave up.

For some time now, the armed groups that have ceased fighting in rural Damascus have been sent not to Daraa, which is about 100 kilometers (62 miles) away, but to Idlib, more than 300 kilometers (186 miles) away, where they face continued airstrikes. This is certainly a well-planned strategic move.

A similar destiny is in the cards for the groups in Aleppo. From Nov. 26 to 28, major groups like Jabhat Fatah al-Sham (formerly Jabhat al-Nusra), Ahrar al-Sham and Nureddin Zengi Brigade lost 12 neighborhoods in Aleppo and were confined to a few neighborhoods.

Sources Al-Monitor reached in Aleppo say negotiations are ongoing to send these groups to Idlib. Will these groups that are emerging in and around Idlib be allowed be set up their autonomous emirates? Washington actually preferred that these groups abandon al-Qaeda, remain where they were and start working toward a solution.

But encouraged by its recent field gains, the Syrian regime is expected to exert more pressure on the north, which would make Idlib (dominated by Jabhat Fatah al-Sham) the next target for the Syrian army.

There are signs on the ground that signal the next phase: To the east and north of Aleppo are the 105th Republic Guards, Tiger Forces, Desert Falcons, Baath Battalion, National Defense Forces, the militia of the Syrian Socialist Nationalist Party and the Jerusalem Brigade set up by Palestinians. To the south of Aleppo, the Hezbollah al-Nujaba, Hezbollah and Iraqi Shiite militias can be seen preparing at Khan Tuman.

The goal of this plan appears to be, first, to clear out the rural Idlib terrain and reach the Shiite settlements of Fua and Kefraya, which are besieged by Jabhat Fatah al-Sham and its allies. Local sources think it is very likely that Hezbollah and Nujaba will launch an offensive from the south while the Syrian army and its allied militias simultaneously mount a major operation from the north. That will be the onset of Turkey’s nightmare scenario.

Ankara will either hold on firmly to the de facto buffer zone it created from the Kilis border to north of al-Bab and turn the rural terrain around Idlib into a safe zone for its allied groups, or they will allow the Syrian army to reach the Turkish border. In both cases, the Turkish border will heat up and Turkey will also have to deal with the jihadi heritage that could spill over the border.