Idlib — more than Raqqa — may be decisive Syria fault line 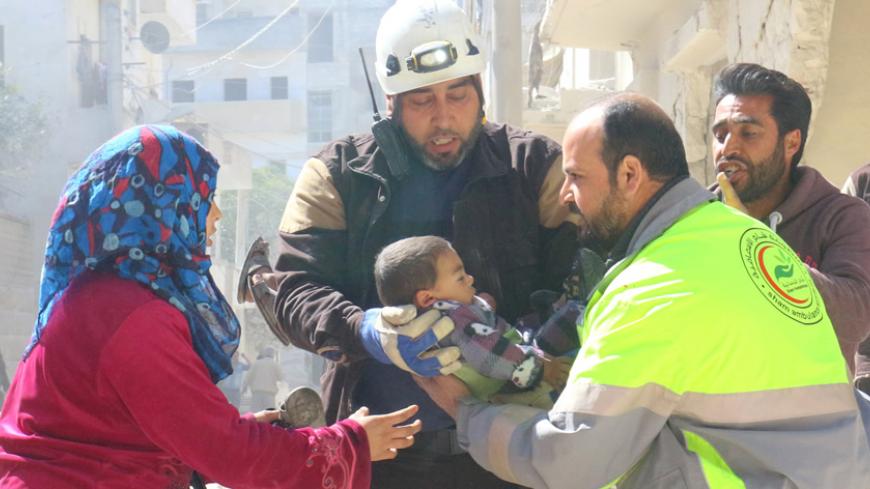 “Turkey’s last-ditch efforts to harness Russian military and diplomatic heft to counter the Syrian Kurds and unravel their alliance with the United States are showing few signs of succeeding, like much else in the country’s ill-fated Syrian policy,” writes Amberin Zaman.

A Russian agreement with the Syrian Kurdish People’s Protection Units (YPG) in the Cindires district of Afrin may foreshadow a potential showdown in Idlib, where al-Qaeda-linked Hayat Tahrir al-Sham and Turkish-backed Salafi groups have taken hold after their defeat in Aleppo.

The introduction of Russian forces in Afrin is reminiscent of what happened in Manbij, where a threatened Turkish assault was deterred by US forces in the north and Russian and Syrian deployments in the south.

“If anything,” Zaman continues, “both the United States and Russia are steadily deepening their ties with the Syrian Kurdish People’s Protection Units (YPG) and its Arab allies who operate under the umbrella of the Syrian Democratic Forces (SDF). And viewed from Ankara, they are doing so at Turkey’s expense.”

The negotiations between Russia and the Syrian Kurds over Afrin included discussion of possible coordination against Jabhat Fatah al-Sham, al-Qaeda’s Syria affiliate, formerly known as Jabhat al-Nusra, now under the umbrella of Hayat Tahrir al-Sham, whose members slipped out of Aleppo with other armed groups under Turkish cover, according to Fehim Tastekin.

Tastekin writes, “YPG sources told Al-Monitor the two sides [Russia and the YPG] met at Khmeimim air base near Latakia to discuss developing a joint operation against Jabhat Fatah al-Sham (previously Jabhat al-Nusra), which has made Idlib its central base. The Kurds initially insisted that the partnership should also oppose organizations such as Ahrar al-Sham, which Turkey supports. In the end, the sources said, both parties decided not to debate which organizations they will confront and agreed that Russia will set up a base in Afrin. The Kurds said they rejected Russia's request to have Syrian regime troops at the base and to fly the Syrian flag there."

He adds, "Zelal Ceger, an official with the Kurdish Movement for a Democratic Society in Afrin, said that the Kurds sought an arrangement with Russia because of persistent attacks on Afrin by Turkish Armed Forces (TSK) and armed groups that Turkey supports," which includes Salafi and Turkmen armed groups.

Ceger told Tastekin that “this war can escalate — hence our call on Russia for an alliance. There has to be coordination between Turkey and us. Russia will provide that coordination to prevent Turkish attacks against Afrin."

Tastekin adds that YPG officials rejected a US proposal to include Syrian Kurdish forces backed by Iraqi Kurdistan President Massoud Barzani, calling it a “conspiracy” that could lead to war among the Kurds.

Zaman writes, “Turkey’s strongest card is its long border with Syria and continued influence over assorted Syrian rebel groups, which it has united under the Euphrates Shield command. Since August, Turkey and its rebel allies have cleared the Turkish border of IS forces and after a bloody and protracted offensive captured the IS-controlled town of al-Bab last month. But firmly hemmed in to the east by Russian, Syrian regime and US forces and now to the west by Russian forces in Afrin, Euphrates Shield appears to have reached the limits of its expansion.”

She adds, “The recent split in Ahrar al-Sham, one of the most powerful rebel factions in Syria, with its top leaders defecting to the Jabhat al-Nusra-dominated and al-Qaeda-linked Hayat Tahrir al-Sham, will have further weakened Turkey’s hand."

While the United States is consumed with planning for unseating the Islamic State (IS) in Raqqa, Idlib may prove a comparable or perhaps even more explosive fault line because of the blurred lines among anti-Western Salafi groups such as Ahrar al-Sham, which is backed by Turkey, and Hayat Tahrir al-Sham.

Tamer Osman reports that Syrian “warplanes are increasingly hovering in the sky over Idlib in northern Syria and targeting several residential areas inside the city.”

Tastekin writes, “The Syrian army has been clearing out IS forces from their last Aleppo stronghold. Thanks to an agreement between Turkey and Russia, Turkish-supported armed groups — which oppose the Syrian regime but were also fighting IS in Aleppo — were allowed to leave there with their weapons and families. Most of them settled in Idlib and Azaz. … Russia and Turkey disagree on what to do with these anti-Syrian (and therefore, anti-Russian) groups. Russia wants them disbanded. Turkey would like them to hold onto that area and join the pro-Turkish Free Syrian Army factions to fight the Kurds and keep them from establishing a continuous autonomous region near Turkey's border. If Russia and the Syrian army open a front against Idlib, clashes with the Turkish-backed groups could spill over to Afrin. Although the Kurds are focused on defending Afrin, they may be amenable to a joint operation with the Russians against threats from Idlib.”

“The biggest problem,” Osman continues, "is the lives of hundreds of thousands of Syrians living in Idlib, as these will not be able to find another shelter amid the ongoing airstrikes falling on the city and its suburbs. This same scenario occurred in areas now controlled by the Syrian regime forces such as the eastern neighborhoods of Aleppo.”

Khaled al-Khateb reports from Aleppo, “Turkey has been training a police organization, the Free Syrian Police (FSP), to help out with secondary operations in Aleppo province so the Free Syrian Army (FSA) can focus on fighting and maintaining control of the areas it has captured.“

Khateb writes, “The FSA's presence there makes residents targets for the Islamic State (IS)." He adds, "The first FSP group, stationed in Jarablus, was recruited in late 2016 from Syrian refugee camps scattered in Gaziantep and Kilis in southern Turkey, unlike the second group stationed in Azaz and nearby towns, which mostly came from Aleppo province. There has been no shortage of recruits.”

Semih Idiz explains that “there is also speculation, fueled by remarks made by Erdogan in the recent past, about a Turkish effort to turn the FSA into Syria’s new army. If this were to come about, it would mean a Sunni-dominated, anti-Kurdish and anti-Shiite army. Given the big picture as it stands today, though, such an army is highly unlikely to be formed, since it would be blocked by Russia and the United States. The bottom line in all of this is that the prospects for Ankara’s realizing its aims in Syria appear to be dimming by the day — a fact that is also being increasingly noted by Turkish analysts.”