Is Turkey rattled by Russian-Kurdish deal?

Turkey may feel its already tenuous footing in Syria slipping now that Russian troops have arrived in Afrin, after making a pact with the Kurds. 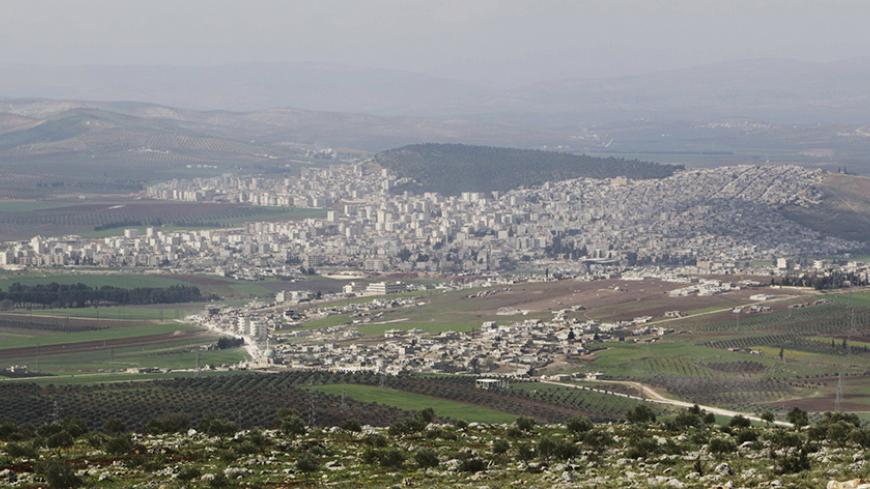 Turkey’s plans to expand its Operation Euphrates Shield in northern Syria and isolate Kurdish forces in the region appear to be backfiring.

After Turkey liberated al-Bab from the Islamic State (IS), it turned toward Manbij, which is controlled by the Kurdish People's Protection Units (YPG) and its Syrian allies, only to encounter US flags northwest of the town and Russian and Syrian national flags to the southwest. Now a similar scenario is being played out in Afrin.

On March 20, YPG spokesman Redur Halil announced Russia would deploy troops to the Cindires district of Afrin province. The statement was followed by photos of military vehicles flying the Russian flag.

“The presence of Russian troops at Cindires is the outcome of an agreement reached between our forces and the Russian army," Halil said. "This agreement foresees partnership in combating terror and training of our fighters by the Russian army. We have direct contacts with Russia.”

YPG sources told Al-Monitor the two sides met at Khmeimim air base near Latakia to discuss developing a joint operation against Jabhat Fatah al-Sham (previously Jabhat al-Nusra), which has made Idlib its central base. The Kurds initially insisted that the partnership should also oppose organizations such as Ahrar al-Sham, which Turkey supports. In the end, the sources said, both parties decided not to debate which organizations they will confront and agreed that Russia will set up a base in Afrin. The Kurds said they rejected Russia's request to have Syrian regime troops at the base and to fly the Syrian flag there.

But the Russian Defense Ministry denied it plans to have a permanent military base there. The ministry said Russia has a site nearby that it uses to monitor cease-fire arrangements.

Preparing for a possible war

Zelal Ceger, an official with the Kurdish Movement for a Democratic Society in Afrin, said the Kurds sought an agreement with the Russians because of persistent attacks on Afrin by Turkish Armed Forces (TSK) and armed groups that Turkey supports. A Russian military convoy went first, as planned, to Cindires, immediately south of Afrin near the western border with Turkey. Russia then decided the convoy would be better positioned in Kefir Ceni, which is about an hour northeast toward the northern Turkish border and some 9 miles from Azaz.

“We have the Turkish state on one side and the gangs on the other," Ceger said. "We are resisting them by our own means. But they are setting up alliances against us. We have to do something about these. The Turkish state is threatening us every day and shelling Raco, Sharra and Shiigi. We are under pressure also from the direction of Tel Firat. Turkey is massing troops around Idlib and giving weapons to the gangs of Idlib."

He added, “This war can escalate — hence our call on Russia for an alliance. There has to be coordination between Turkey and us. Russia will provide that coordination to prevent Turkish attacks against Afrin."

Russian military experts have been coming to Afrin for the past two years. These visits started immediately after Turkey said it wouldn't allow the YPG to cross to the west of the Euphrates River, and the YPG started attacks from Afrin against Azaz. However, if the YPG sources are correct, this will be the first time the Russians have felt the need for a permanent base at Afrin. Why?

A senior YPG commander speaking to Al-Monitor on condition of anonymity said, “According to an agreement between Turkey and Russia, Turkey was to hand over al-Bab to the Syrian army after capturing it from IS. But Turkey did not leave al-Bab. To the contrary, it is now building a second base on a dominating hill outside al-Bab. It had already built a base at Aktarin. When the Turks didn't pull out of al-Bab, Russia wanted to send them a new message. Russia’s rapprochement with the Kurds stems from the weakness of Turkish-Russian relations.”

Will the rapprochement affect the partnership between the United States and the Kurds? The senior YPG commander replied, “No. We initiated contacts with Russia after openly speaking about it with the Americans. We told the Americans, ‘If you are not willing to cooperate with us at al-Bab and Afrin, then we will have to look for other connections.' They did not react. The Russian and American positions on Raqqa have become closer. This makes it easy for us to set up relations with both of them.”

Raqqa, the so-called IS capital in Syria, is another sore spot with Turkey, which has made it clear it plans on being part of the operation to take control of the city. That scenario is looking more unlikely each day.

After the United States and Russia reached an understanding on Manbij, the United States continued providing military assistance to the Syrian Democratic Forces, a YPG-dominated coalition. The United States has brought in armored vehicles, heavy weapons and helicopters for the Raqqa operation. The Kurds are now waiting for Apache assault helicopters. In the meantime, the Kurds firmly rejected a US proposal to include Syrian Kurdish peshmerga forces supported by Massoud Barzani, the president of the Kurdistan Regional Government in northern Iraq. Barzani cooperates with Turkey. YPG Kurds said of the proposal, “We see this as a conspiracy. It will mean war between the Kurds. We categorically reject it.”

All these developments indicate that either the United States is being flexible or it is not in a position to impose conditions on the Kurds, who are aware that the US-Russia understanding could be a short-term one.

The critical question now is what will happen at Idlib. The Syrian army has been clearing out IS forces from their last Aleppo stronghold. Thanks to an agreement between Turkey and Russia, Turkish-supported armed groups — which oppose the Syrian regime but were also fighting IS in Aleppo — were allowed to leave there with their weapons and families. Most of them settled in Idlib and Azaz.

Now, Russia and Turkey disagree on what to do with these anti-Syrian (and therefore, anti-Russian) groups. Russia wants them disbanded. Turkey would like them to hold onto that area and join the pro-Turkish Free Syrian Army factions to fight the Kurds and keep them from establishing a continuous autonomous region near Turkey's border.

If Russia and the Syrian army open a front against Idlib, clashes with the Turkish-backed groups could spill over to Afrin.

Although the Kurds are focused on defending Afrin, they may be amenable to a joint operation with the Russians against threats from Idlib. The YPG commander told Al-Monitor, “We could, of course, join operations against Idlib-based groups if we so wanted. Idlib is the key now. If Idlib is attacked, then Afrin will come under pressure. We are open to different alternatives.”

According to this YPG commander, if Turkish-supported groups or the Turkish army directly move against Afrin, the Kurds have two options: “The first option is cooperation with Russians. This is ongoing. Russian deployment at Afrin is an open message to Turkey. Our second option is to give the green light to the Syrian army. Afrin is a Syrian town. The Syrian army can come there as stipulated by its territorial integrity. If we have to, we will look into this option.”

In summary, Russia has deployed troops to Afrin for three reasons. First, it is sending a message to Turkey, via the Kurds, that it is unhappy about Turkey not leaving al-Bab. Second, Russia will not allow a TSK move against Afrin. Third, a northern Kurdish front is developing against groups like Jabhat Fatah al-Sham at Idlib.