Turkey wants to be part of the de-escalation process in Syria, especially if that means it can multitask and wipe out the Kurdish corridor at the same time. 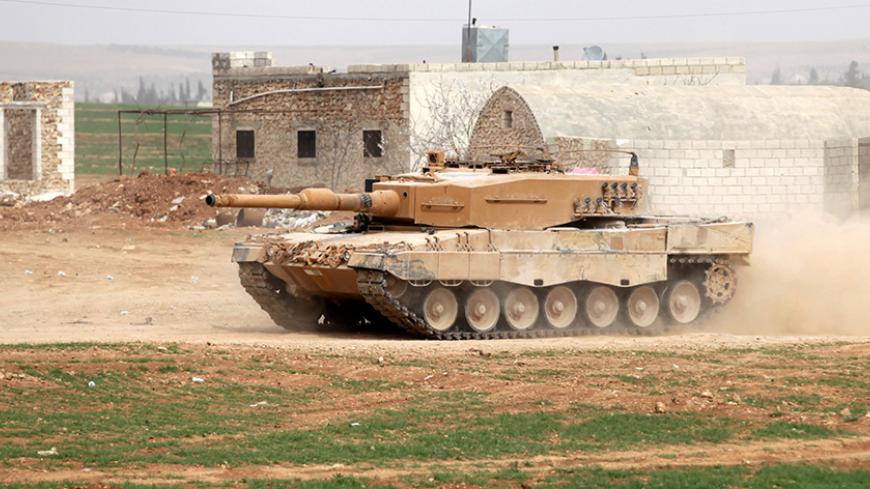 Turkey supposedly ended Operation Euphrates Shield, its military mission in northern Syria, March 29. But instead of withdrawing its troops, Ankara actually expanded its military activities between Azaz and al-Bab. It's becoming increasingly clear that Turkey has a new plan for the area.

Last week, convoys of tanks, artillery and armored vehicles crossed from Kilis in Turkey to Syria and deployed in the areas of Azaz, Marea and Tel Rifaat. This reinforcement activity is likely to continue. The Turkish Armed Forces (TSK) had already established bases at Marea, Tuwais, Kel Jibril and Dabik during Euphrates Shield.

Though pointing to Idlib as the next destination, Turkey’s field operations signal double objectives.

First, Turkey wants its own troops in the de-conflicting, or "safe," zones determined during peace talks in Astana, Kazakhstan. Second and more important to Turkey is to take advantage of the competition between rival coalitions west of the Euphrates. With the United States and Kurds on one side and Russia, Iran and the Syrian army on the other, Turkey hopes to break up the corridor carved out by the Kurdish People’s Protection Units (YPG). Ankara considers this stretch of land a threat to Turkey’s national security.

According to official comments from Ankara, an operation is in progress to add Idlib to the area Turkey controls. Currently, Idlib is divided between Ahrar al-Sham and Hayyat Tahrir al-Sham. Though both Salafi militant groups seek the overthrow of Syrian President Bashar al-Assad, they are rivals.

Turkey's presidential spokesman Ibrahim Kalin talked of a plan calling for Russian and Turkish deployment at Idlib, Russian and Iranian troops around Damascus, and American and Jordanians at Daraa in the south.

"There is even a Russian proposal for Kyrgyzstan [and] Kazakhstan to send troops," Kalin said.

According to information leaked to the news media by official Ankara sources, TSK forces will cross into Syria from three locations and establish control over an area 35 by 85 kilometers (21 by 52 miles). This corridor would start at Daret Izza and extend to Obin and Khirbet al-Joz. Another area of land, starting from Turkey’s Hatay border and extending 35 kilometers to Sahl al-Ghab, would also be controlled by the TSK. In this security configuration around Idlib, Turkey’s Free Syrian Army (FSA) allies would also have a role. So far, as many as 2,000 FSA soldiers have been put on alert.

Initially, Turkey said it was moving its forces to the Azaz-Marea line to prevent attacks in Turkish-controlled northern Syria from the area controlled by the YPG and its allies. Turkish reports said truck-mounted Grad missiles, mortar shells and 23 mm anti-aircraft weapons were being fired from Menagh base and Horbul close to areas held by TSK units — hence the alert status declared for Turkish and FSA units.

A YPG commander told Al-Monitor on condition of anonymity, “Turkey-controlled groups started fighting each other west of the Euphrates. Turkey’s solution was to turn them on the Kurds. For the past few days, the TSK and groups it controls have stepped up their attacks against the Tel Rifaat and Afrin areas. YPG has repulsed these attacks.”

Meanwhile, Kurdish news media report that since the United States shot down a Syrian plane to purportedly protect the Syrian Democratic Forces (SDF) at Tabqa, Russia in retaliation will turn a blind eye to a joint operation by Turkish and Syrian armies against Tel Rifaat and Afrin.

While assorted speculation continues, Turkish President Recep Tayyip Erdogan, who had not been referring to Syria of late, suddenly came out with a statement directly targeting the Kurds. “The PYD and the YPG are trying to achieve something. They should know that no matter who is behind them, Turkey will never allow establishment of a [Kurdish] state in northern Syria,” he said. The United States has been backing the Kurdish nationalist Democratic Union Party (PYD), which Turkey says is the Syrian offshoot of the Kurdistan Workers Party (PKK). Turkey considers the PKK a terrorist organization.

Turkey's army deployments at Dodian, Kere Mazraat and Shava villages of the Azaz district suggest Afrin is in its sights. But Afrin, where the PKK has been robust since the 1990s, has thwarted all attacks by groups to which Turkey has supplied artillery.

Developments on the ground point to an operation more complex and far-ranging than just Idlib. There are Kurds living between the Turkish border and the targeted Kurdish corridor in places such as Tel Rifaat, Sheikh Issa and Kafr Naya, all controlled by the YPG and its allies. The area between the southern YPG-held land and Aleppo is controlled by the Syrian army. The YPG is defending Afrin like a fortress.

So, in addition to severing the Kurdish corridor from Kobani and Manbij to Afrin, Turkey now wants to complete its half-achieved Euphrates Shield mission by declaring Idlib its next destination.

After retaking al-Bab in February, the Turkish army turned toward Manbij, but that operation was abandoned after the United States hoisted its flags. When Turkey focused next on Afrin, the Russians sent a small military mission there in the guise of monitoring the cease-fire. Kurds are not sure how far they can trust American and Russian protection.

Recently Turkey has been a bit more at ease because of developments that led to speculation that Russia would like to rein in the Kurds by giving a green light to Turkey at Tel Rifaat and Afrin. The developments included: the SDF in northern Syria crossing to the west of Euphrates and capturing the Tabqa base; the Americans' wish to deploy at that base becoming known; SDF efforts to keep the Syrian army from reaching Raqqa and Deir ez-Zor; and the tension that followed the United States' shooting down the Syrian plane.

Kurds insist that the Syrian army is cooperating with Turkey in this operation, at Russia's behest. But there are no real indications of Russians and the Syrian army wanting to suppress the Kurds. To the contrary, the feeling in Damascus is that Russia and Syria would prefer to keep the Kurds as their ally.