Turkey waiting … and waiting … to intervene in Afrin

Ankara's pro-government media are blaming the United States and Russia for delaying Turkey’s move on Kurdish forces in Afrin, which was to begin July 5. 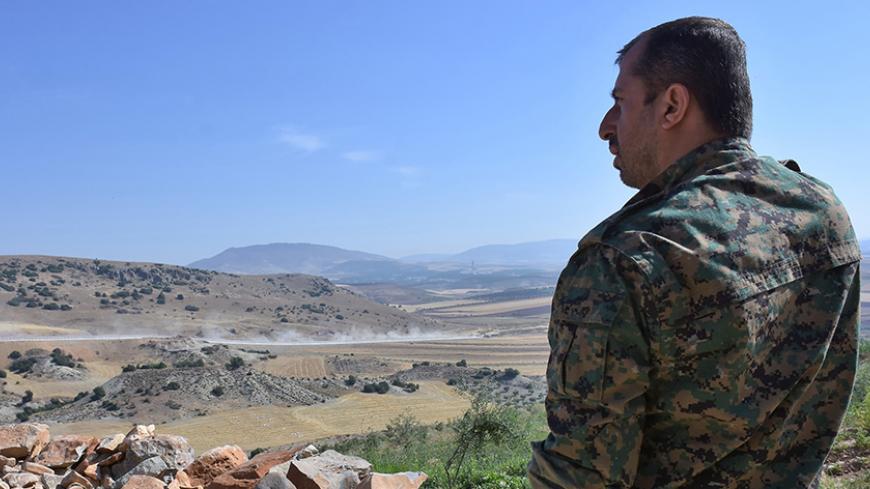 A fighter from the Kurdish People's Protection Units monitors in the area of Afrin, along Syria's northern border with Turkey, June 9, 2017. - GEORGE OURFALIAN/AFP/Getty Images

Turkey has mobilized thousands of troops to combat the Kurdish People’s Protection Units (YPG) in Afrin, Syria, and made sure those moves were well-publicized. There were even media reports that July 5 would be the launch date. The areas around Afrin and nearby Tel Rifaat occasionally came under Turkish artillery fire to add credence to predictions that war was around the corner.

As we were all waiting for a war to break out, Ankara began to whine about US and Russian stalling tactics to obstruct the operation Turkey was planning with the Free Syrian Army (FSA). Turkey began vacillating between rhetoric and reality. Just as Turkey's Operation Euphrates Shield in Syria was carried out with a green light from Russia as the United States looked the other way, the feasibility of Turkey's move on Afrin also requires their assent.

Just look at the field to understand what is going on.

As opposition forces battle the Syrian regime, and Turkey is using some of those opposition forces to target its perpetual enemy — the Kurds — Russia is supporting the Syrian regime while helping a US-led coalition (with the aid of some Kurds) to fight the Islamic State (IS). If Turkey attacks the Kurds in Afrin, the United States fears that could detract from the Kurdish help it's getting to fight IS.

A final agreement for deconfliction zones in the Syrian civil war was to be signed July 4 in Astana, Kazakhstan, as a prelude to the Afrin operation. If there was a hitch at Astana, then Turkish President Recep Tayyip Erdogan was to try, during the G-20 summit in Hamburg, to sell US President Donald Trump and Russian President Vladimir Putin on the Afrin move anyway. An agreement was not reached at Astana, and Erdogan couldn’t exploit the crack between the United States and Russia, and so returned from Hamburg empty-handed.

Pro-government daily Yeni Safak expressed its disappointment: “The same ploy used against Turkey at Manbij is now being staged at Afrin. The US did not deliver on its promise that the PKK [Kurdistan Workers Party, which Turkey and the United States consider a terrorist group] would evacuate Manbij [at that time], and is now obstructing our intervention at Afrin and playing for time. If Turkey’s intervention — with the 17,000 FSA fighters it prepared — is delayed, then the PKK will start hitting our borders.”

Ankara was trying to secure a Russian green light for the Afrin operation in return for Turkey’s assistance with a Russian deconfliction zone at Idlib. There were media reports that Russia had agreed to this deal and was even preparing to set up a joint base with Turkey at Idlib.

Meanwhile, Kurdish media outlets reported that because the United States shot down a Syrian plane back in June, Russia had decided to help Turkey, even work jointly with it to prevent the YPG from crossing to the west of the Euphrates with US support, and to compel the Kurds to cooperate with the Syrian regime.

What is always overlooked in the tense politics between Turkey and the Kurds is that an amplified Turkish military presence disturbs both Russia and Syria. No wonder the Syrian Foreign Ministry denounced Turkey's shelling of Afrin to the United Nations, accusing Turkey of being a "partner" in terrorism and of pursuing an expansionist policy.

As for Russia, Foreign Ministry spokeswoman Maria Zakharova summarized Moscow's attitude: “Nobody involved in the Syrian process should threaten that country’s laws, sovereignty and territorial integrity.”

Russia does not want the deployment of the Turkish army and Syrian Hayat Tahrir al Sham. Moscow wants to use military police detachments from friendly, Muslim countries such as Kazakhstan, Kyrgyzstan and Uzbekistan to enforce law and order at Idlib. After the Syrian army took over Aleppo, Russia deployed a 250-strong elite military police force from Chechnya and Ingushetia.

Moscow sees the “Turkish threat” as a useful instrument of political manipulation, but fears it would further complicate the process. The United States fears a Turkish operation against Afrin will hamper the operation at Raqqa, where the US-backed Syrian Democratic Forces (of which the YPG is a part) is trying to drive out IS. An interruption to that effort would further deepen the US-Turkey rift.

Ankara was comforted a bit by several factors: the US intention to deploy at Tabqa air base; its targeting of Syrian regime forces approaching the training base the United States had set up at the Jordanian border; and, finally, its shooting down of the Syrian plane. But the agreement between the United States and Russia last week for a deconfliction area that will cover Daraa, Suwayda and Quneitra could have opened the door a bit for cooperation between the two major powers. This meant Turkey's effort of taking advantage of a split between the two powers was futile.

Meanwhile, the people of Afrin, not to be left without a voice, demonstrated their will to resist a Turkish invasion. Media outlets reported in early July that tens of thousands of citizens hit the streets to protest Turkey’s intervention plans, shouting "Live Forever, YPG!"

In response, Turkish-supported groups organized smaller-scale demonstrations to accuse the Kurds of occupying Arab and Turkmen villages and to call for an operation against Afrin.

Although the US-Russia accord over Syria and their opposition toward Turkish designs could be stumbling blocks, it doesn’t mean the Turkish military and the local militias it supports will abandon their pressure on Afrin and Tel Rifaat. Afrin was in Turkey’s sights even before Operation Euphrates Shield. Fehim Isa, commander of the Sultan Murad Division, said, “In February, Turkey instructed us to prepare for an attack against Afrin immediately after the al-Bab operation.”

So as long as the United States and Russia need Turkey to make progress in Syria, pressure on Afrin will continue — up to a point.