Does the US have answer for Turkish threats against Syrian Kurds? 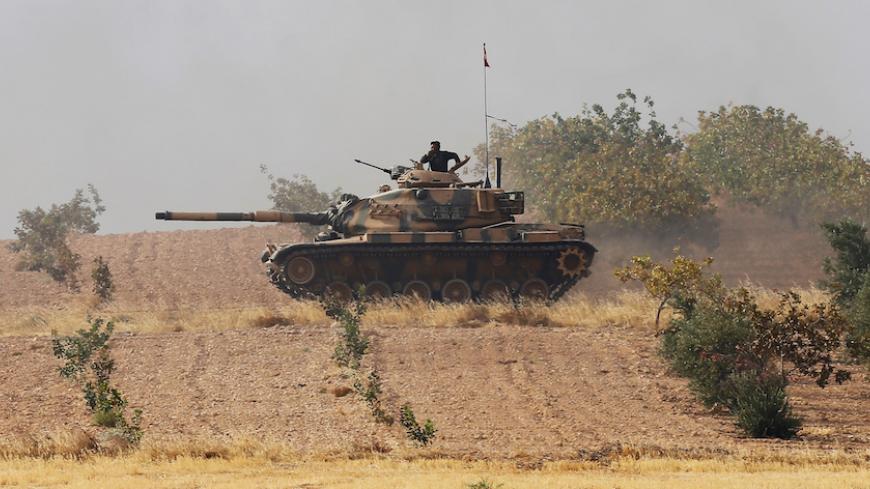 Turkish military actions against US-allied Syrian Kurdish forces could threaten to upend plans for unseating the Islamic State (IS) in Raqqa, Syria, and for what comes next.

“Though pointing to Idlib as the next destination,” Fehim Tastekin reports, “Turkey’s field operations signal double objectives. First, Turkey wants its own troops in the de-conflicting, or 'safe,' zones determined during peace talks in Astana, Kazakhstan. Second and more important to Turkey is to take advantage of the competition between rival coalitions west of the Euphrates. With the United States and Kurds on one side and Russia, Iran and the Syrian army on the other, Turkey hopes to break up the corridor carved out by the Kurdish People’s Protection Units (YPG). Ankara considers this stretch of land a threat to Turkey’s national security.”

"According to information leaked to the news media by official Ankara sources,” Tastekin continues, “TSK [Turkish military] forces will cross into Syria from three locations and establish control over an area 35 by 85 kilometers (21 by 52 miles). This corridor would start at Daret Izza and extend to Obin and Khirbet al-Joz. Another area of land, starting from Turkey’s Hatay border and extending 35 kilometers to Sahl al-Ghab, would also be controlled by the TSK. In this security configuration around Idlib, Turkey’s Free Syrian Army (FSA) allies would also have a role. So far, as many as 2,000 FSA soldiers have been put on alert.”

Tastekin reports, “Kurds insist that the Syrian army is cooperating with Turkey in this operation, at Russia's behest. But there are no real indications of Russians and the Syrian army wanting to suppress the Kurds. To the contrary, the feeling in Damascus is that Russia and Syria would prefer to keep the Kurds as their ally."

The US State Department, at least publicly, does not have an answer as to whether Turkey’s moves might complicate its overall Syria strategy. Asked by a reporter June 29 whether the United States was concerned about Turkish threats and attacks on the Syrian Democratic Forces (or SDF, which is made up primarily of YPG fighters), State Department spokeswoman Heather Nauert replied, “The reason that the United States is involved in Syria is to take out [IS]. That’s why we care and that’s why we are there. Our focus is on liberating Raqqa right now. Our forces aren’t operating in the area that you’re talking about. I don’t want to get into [Department of Defense] territory. That is theirs. But our focus is on another part of Syria right now.”

That same day, pressed by a reporter as to whether the United States would defend the SDF against Turkey, Col. Ryan Dillon, a spokesman for the Combined Joint Task Force-Operation Inherent Resolve, said, “We're not going to get there. I don't want to speculate on that. We will continue to support our SDF partners in the fight against [IS] in Raqqa and perhaps elsewhere after that.”

And this brings us to Idlib. Tastekin writes: “According to official comments from Ankara, an operation is in progress to add Idlib to the area Turkey controls. Currently, Idlib is divided between Ahrar al-Sham and Hayyat Tahrir al-Sham. Though both Salafi militant groups seek the overthrow of Syrian President Bashar al-Assad, they are rivals. Turkey's presidential spokesman Ibrahim Kalin talked of a plan calling for Russian and Turkish deployment at Idlib, Russian and Iranian troops around Damascus, and American and Jordanians at Daraa in the south.”

Idlib is, simply put, a time bomb for those who may hope that defeating IS in Raqqa might be the beginning of the end of the counterterrorism campaign in Syria. This column said in March: “While the United States is consumed with planning for unseating IS in Raqqa, Idlib may prove a comparable or perhaps even more explosive fault line because of the blurred lines among anti-Western Salafi groups such as Ahrar al-Sham, which is backed by Turkey, and Hayat Tahrir al-Sham.” The latter group is comprised of current and former al-Qaeda and affiliated forces. Ahrar al-Sham’s on-again, off-again ties with al-Qaeda make it, in our view, a fellow traveler, not an alternative, even if the two groups are presently at odds.

Do Turkey’s plans for Idlib include cleaning house on these groups? If not, we can expect Idlib to remain a safe haven for Salafi and terrorist forces seeking to keep up the fight against the Syrian government, while the citizens of Idlib continue to suffer under the brutal and arbitrary rule of these armed gangs.

In a related story, Metin Gurcan reports that Turkey is looking to crack down on “foreign fighters,” including Americans, who have taken up arms with the YPG. Gurcan writes: “There are plenty of allegations, but as of today the media has no evidence that foreign fighters in the YPG are fighting against Turkish security forces in Turkey or Syria. However, the capture of just one YPG foreign fighter in Turkey or one fighting Turkish forces in Syria could rapidly worsen legal and diplomatic relations between Turkey and the Western allies to dangerous levels — especially if that foreign fighter turns out to be a citizen of a NATO country.”

Adnan Abu Amer writes that the blockade of Qatar led by Saudi Arabia and the United Arab Emirates continues to push Hamas toward Iran, as Al-Monitor has reported.

On June 14, Mousa Abu Marzouk, deputy head of Hamas’ political bureau, met with Hezbollah Secretary-General Hassan Nasrallah. “It is no secret that Hamas, despite having different positions regarding the Syrian crisis, needs Hezbollah when it comes to funding, training, securing supply lines for weapons and providing residence for Hamas cadres in Lebanon,” Abu Amer writes. “For its part, Hezbollah needs a Palestinian movement, such as Hamas, to restore its popularity among Arab public opinion, which it lost after being involved in the wars in Syria, Iraq and Yemen against Sunni Muslims. Hamas, as a Sunni Islamic movement getting closer to the Shiite Hezbollah, may help dispel Hezbollah’s sectarian image. The new rapprochement between Hamas and Hezbollah may contribute to the return of armament and training cooperation programs, with the support of Iran.”

Abu Amer concludes: “Hamas realizes that the margin of political maneuvering has been narrowed by the polarization of the two rival axes: Qatar and its allies against Saudi Arabia and its partners. However, in the absence of other options, the movement seems compelled to resort to Iran and its allies in the region, namely Hezbollah, to survive. Even if it is faced with a new wave of criticism, Hamas would still be turning toward Hezbollah.”