Does Turkey face day of reckoning with al-Qaeda in Idlib? 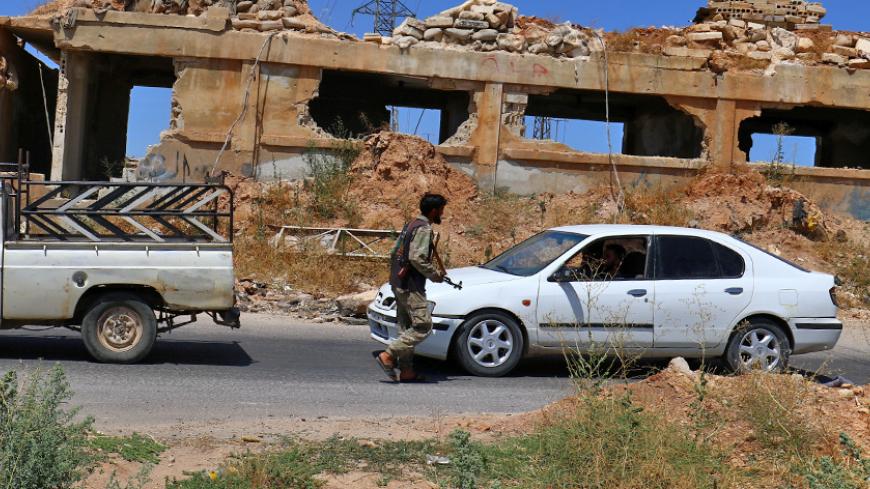 Fehim Tastekin reports how both the CIA’s decision to end a covert program to fund Syrian armed groups and the Gulf-Qatar crisis may force an eventual showdown with al-Qaeda-linked Hayat Tahrir al-Sham (HTS) in Idlib.

This column wrote back in March, “While the United States is consumed with planning for unseating the Islamic State (IS) in Raqqa, Idlib may prove a comparable or perhaps even more explosive fault line because of the blurred lines among anti-Western Salafi groups such as Ahrar al-Sham, which is backed by Turkey, and Hayat Tahrir al-Sham [which is linked to al-Qaeda]."

Tastekin provides unusual detail on Turkey’s options in Idlib. “US, Turkish and Saudi intelligence officials in the joint operations centers had taken some steps to improve the field situation after al-Qaeda fighters gained strength in Idlib,” Tastekin writes. “In February, US, Saudi and Turkish intelligence services called in leaders of local groups and told them that unless they could form a workable joint front, the joint operations center would cut off assistance, which included fighters' salaries, light weapons, ammunition and anti-tank missiles. Faced with this ultimatum, 17 organizations declared they had united under the Northern Front Operations Room.”

He adds, “In parallel efforts, Turkey conducted a series of meetings in Ankara with Syrian militia leaders to set up armies called Jaish al-Watan and Jaish al-Tahrir to extend Operation Euphrates Shield to Idlib, but the effort failed. Cutting off assistance to these groups will make them even less relevant.”

Tastekin explains, “Western- and Gulf-supported groups may come under more pressure to join the peace talks at Astana, Kazakhstan. Currently on the Idlib front, HTS is consolidating its hold over the area. … Now Turkey has had to send 150 fighters it had 'borrowed' from Ahrar al-Sham back to Idlib to help out."

Mat Nashed writes, “While the cease-fire holds for now, activists and analysts say that armed groups are undermining the role of civil society. … Rather than fully sabotaging relief services, HTS has tried to win support by establishing its own civil department to oversee provisions. Ahrar al-Sham, a rival ultraconservative militia that wields considerable power in Idlib, has adopted the same strategy.”

Tastekin adds, “The CIA’s withdrawal might also affect Ankara's operational plans regarding Idlib. Ankara was relying on Ahrar al-Sham to end the HTS domination there, but Turkey’s hopes were misplaced.”

The Gulf-Qatar crisis is also affecting the balance of forces in Idlib. Qatar, like Turkey, has been a major backer of Ahrar al-Sham, and it is unclear as yet whether that support will continue. “Saudi Arabia,” Tastekin writes, “upset with Turkey for its support of Qatar, is not expected to cooperate more with Turkey in northern Syria. We have to remember that the conquests of Aleppo and Idlib in 2015 were made possible mostly by generous support from the Saudis. … Those criticizing Trump’s decision say that, in the absence of the CIA, Turkey and the Gulf countries might begin supplying the radical groups with advanced anti-aircraft weapons, especially MANPADS (shoulder-fired missiles).”

This column has argued for years that the al-Qaeda-linked groups and Ahrar al-Sham are brothers in arms and ideology, committed, if under different banners, to Sharia rule and ending the Syrian people’s tradition of secularism and tolerance toward minorities and other religions. It was not so long ago that Ahrar al-Sham and al-Qaeda-linked Jabhat al-Nusra (as it was known then) rallied together under the Jaish al-Fatah “Army of Conquest” banner. Although the groups were thankfully run out of Aleppo, many of their surviving members managed to escape to Idlib, where they terrorize the local population.

With regard to Turkey, there is perhaps a bit of what goes around, comes around. Amberin Zaman wrote earlier this month about a Turkish Interior Ministry report that details the government's battle against the Islamic State. “To be sure,” Zaman explains, “Turkey is the country that has suffered most from IS, the report notes. The group has conducted 14 attacks against Turkey, including 10 suicide bomb attacks and three shooting attacks. Some 304 people have lost their lives and 1,338 as a result of IS actions.”

Zaman continues, “Some experts say Turkey largely has itself to blame for this outcome. Turkey has long been accused of leniency if not outright collusion with IS, which grew stronger as a direct result of its lax border policies that let armed rebels of all stripes to go in and out of neighboring Syria in the hope that they would overthrow the country’s President Bashar al-Assad.”

Zaman adds, “The jihadis have targeted the Syrian Kurdish People’s Protection Units (YPG). … The deadliest IS operations inside the country targeted pro-PKK Kurds, and the official reaction was a deafening silence. The lack of response fed accusations that Turkey was egging IS on against the Kurds, most notably when the group laid siege to the Syrian Kurdish border town of Kobani in 2014."

Al-Monitor columnists have for years covered and lamented the two-way “jihadist highway” and the porous border between Turkey and Syria, which fueled the transit of foreign fighters and supplies to both IS and Jabhat al-Nusra, the al-Qaeda affiliate, as well as Ahrar al-Sham and other Salafi groups.

Turkey’s quagmire in Idlib is complicated by the United States mostly staying out of the action there, and ceding ground, until now, to Russia and Turkey. Moscow understands the threat of Idlib as a rat’s nest of jihadi and Salafi hold outs, but is wary of an escalation, at least for now, especially given the uncertainty over Turkey’s intentions and capabilities.

Bruce Riedel explains that al-Qaeda has also begun to increase the ideological challenge to Saudi Arabia. “Al-Qaeda will no doubt test the new security team in Riyadh,” Riedel writes. “Cells of al-Qaeda in the Arabian Peninsula remain active, and as-Sahab will go after the legitimacy of the new crown prince, painting him as unqualified for the throne. The kingdom is facing a complex and interrelated series of challenges with deadly enemies.”

Amberin Zaman reports on the circus trial of 17 journalists, including Al-Monitor columnist Kadri Gursel, on alleged collusion and support for terrorist organizations in Turkey.

Human Rights Watch writes that the trial is part of a "vicious crackdown on independent voices.” The group notes that “there appears to be nothing that would indicate any kind of criminal wrongdoing, much less helping terrorism.”

Zaman writes, “At the last count at least 150,000 people had been sacked from government jobs and academia and 50,000 or more jailed over their alleged collusion. With over 150 journalists currently behind bars, Turkey remains the world’s biggest jailer of journalists. Yet in a recent interview with the BBC, Erdogan claimed only two of them were real journalists. The rest, he insisted in a recent public address, consist of murderers, fraudsters, thieves and child molesters. … The bulk of jailed media workers were employed by now shuttered Gulen-affiliated titles, a crime in and of itself regardless of what they reported or the opinions they aired. Victims who fall under this category include Sahin Alpay, a septuagenarian intellectual who is in ailing health, as well as respected liberal economist Mehmet Altan. Their plight has attracted far less sympathy among Turkey’s urban secularists, partly because many believe that not only was Gulen mired in the coup but that he helped propel Erdogan to power in the first place. Many others have been imprisoned over their affiliation with pro-Kurdish outlets.”

“International scrutiny of Turkey’s record on media freedom and solidary for its embattled journalists has never been more important,” Human Rights Watch concludes.