Aleppo on verge of decisive battle

UN Syria envoy calls for “urgent initiative” as Syrian offensive in Aleppo appears imminent; the question at the heart of the Aramco IPO offer. 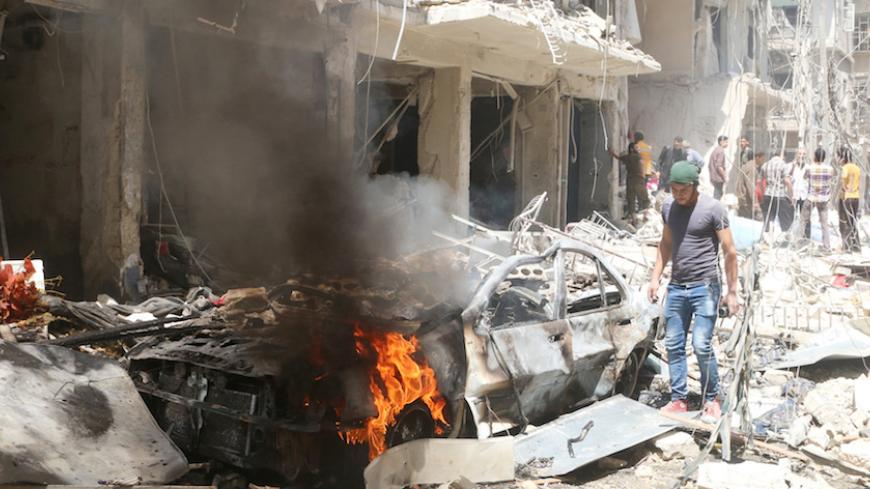 People inspect the damage at a site hit by airstrikes in the rebel-held area of the Bustan al-Qasr neighborhood in Aleppo, April 28, 2016. - REUTERS/Abdalrhman Ismail

Aleppo may be last stand for Salafi groups

UN Syria Envoy Staffan de Mistura has called for an “urgent initiative” by the United States and Russia, including a ministerial meeting of the International Syria Support Group, to re-establish a cessation of hostilities in Syria. While the UN envoy noted “some progress” in the second round of proximity talks between the Syrian government and opposition groups, he said that the next round would be meaningful only if accompanied by a renewed cessation of violence.

The latest round of UN talks, which concluded last week in Geneva, was overshadowed by the escalation of fighting and casualties in Aleppo, including the bombing of the al-Quds hospital, which killed at least 20, including a pediatrician and three children.

The Russian Federation on April 26 formally requested that the UN Counter-Terrorism Committee Executive Directorate (CTED) add Ahrar al-Sham and Jaish al-Islam to its list of sanctioned organizations because they “are closely linked to terrorist organizations, first of all Islamic State (formerly ISIS/ISIL) and Al-Qaeda, and provide and receive from them financial, material, technical and military support.” Russia has long argued for the two groups’ designation as terrorist entities, which would allow Syria and its allies to make the case for offensive military operations against them, even during a cessation of hostilities, under UN Security Council Resolution 2254. The United Arab Emirates, for its part, has designated Ahrar al-Sham a terrorist organization.

This column has warned since 2013 about the mainstreaming of these foreign backed “rebel” Salafi groups, including by advocates in the West, and would prefer they be excluded from negotiations about Syria’s future, given their radical sectarian ideology. It should, for example, be alarming that the head of the Syrian opposition’s High Negotiations Committee, Mohammad Alloush, is also the leader of Jaish al-Islam. This, while perhaps alarming, is not surprising as the committee was formed in Riyadh. Alloush’s father, Zahran Alloush, was memorably described by one former US official as simply an “ambitious Islamist commander” in an article about a resurgent “moderate” opposition in 2014. For the record, Zahran Alloush was an apocalyptic sectarian hater of the highest order, memorably warning Shiites that “the Umayyad had previously broken your heads, the Levantines will break them again, you impure rejectionists,” among other bile. We would refer to you an article by Ali Mamouri about the mischaracterization of Alloush as a “moderate.”

The United States is well aware of Ahrar al-Sham’s and Jaish al-Islam’s on-again, off-again collaboration with Jabhat al-Nusra, al-Qaeda’s affiliate in Syria, and both groups’ radical Islamic ideology, which barely differs from that of Jabhat al-Nusra and the Islamic State (IS) and has little foundation or appeal among the vast majority of Syrians. Washington has been boxed in, however, because these groups are backed tooth and nail by Saudi Arabia, Turkey and Qatar, so Washington has, until now, held the line, and its nose, in resisting Russia’s entreaties in deference to its regional partners and as a means of “pressure” on Syrian President Bashar al-Assad.

The battle for Aleppo could clarify the next phase in the Syria conflict, especially by putting to the test the alleged popular support of these Salafi groups. We cannot envision the population of this great city rallying to defend the Sharia rule of Ahrar al-Sham or other armed groups. The citizens of Aleppo have endured enough suffering. Our hunch is that they will instead welcome a united city and an end to the fighting, as well as the retreat of the Salafi and jihadi “rebels.” We wrote in January, “A Syrian government victory in Aleppo could be the beginning of the end of the sectarian mindset that would have been alien to the city prior to 2011. There is no more appropriate city to begin Syria’s healing. A Syrian government victory in Aleppo will make it harder to rationalize Western backing for jihadi groups that want to keep up the fight against long odds in the rest of the country. IS and al-Qaeda may prefer, over time, to begin to relocate to Libya and other countries where they can avoid the pounding from the US-led anti-IS coalition and Russian- and Iranian-backed Syrian forces. This may already be happening, and if so, it is to be cheered by those who seek a unified, secular and nonsectarian Syria, as outlined in the Vienna Communique, and as is Aleppo’s tradition.”

Aramco’s 5% may be less than meets the eye

At the core of the 2030 vision is the public offering of 5% of Aramco’s shares, worth an estimated $2 trillion, which would be the largest such offering ever. Rami Khrais explains that “by listing Aramco, the largest oil company in the world, Saudi Arabia hopes to establish the foundation for turning the PIF [Public Investment Fund] into a sovereign fund that lends itself to diversifying sources of national income away from oil revenues, which account for more than 80% of Saudi exports.”

But here’s the catch: Why would investors put their stake in an industry that the kingdom is seeking to downsize? The decision to wean Saudi Arabia off oil dependence and reduce subsidies — good economic medicine for sure — comes at a time of economic crisis and could be accompanied by social and political volatility, especially if the goal is actually to end oil dependence by 2020, as the deputy crown prince said in the interview.

In an interview on Al-Arabiya television, the deputy crown prince said, “People in the past were displeased with the fact that Aramco's file and data are undeclared, unclear, and nontransparent. Today, it will become transparent.” Transparency is all to the good, but it has not been the hallmark of Saudi decision-making. The kingdom’s regional policies, especially in Yemen, have seemed at times impulsive and emotional and contribute to a climate of regional instability. The Economist noted this week that the “shadow” of the “Wahhabi religious establishment … hangs over all reform in Saudi Arabia.”

Khrais concludes, “Although the Saudis' move to establish a new sovereign fund appears to bode well, that alone is insufficient. It also requires a comprehensive blueprint that establishes the functions and powers of the fund and its governance. In addition, the fund’s objectives must complement the objectives of creating a local economic base for sustainable development. Serious public finance reforms will also need to be implemented to ensure optimum outcomes in the long term.”