Syrian endgame could begin with Aleppo

Aleppo could begin healing in Syria; Syrian armed group backed by US allies seeks caliphate; FSA leader says US “moving toward being a partner in crime” in Syria; Hagel says US Syria policy was paralyzed over "Assad must go." 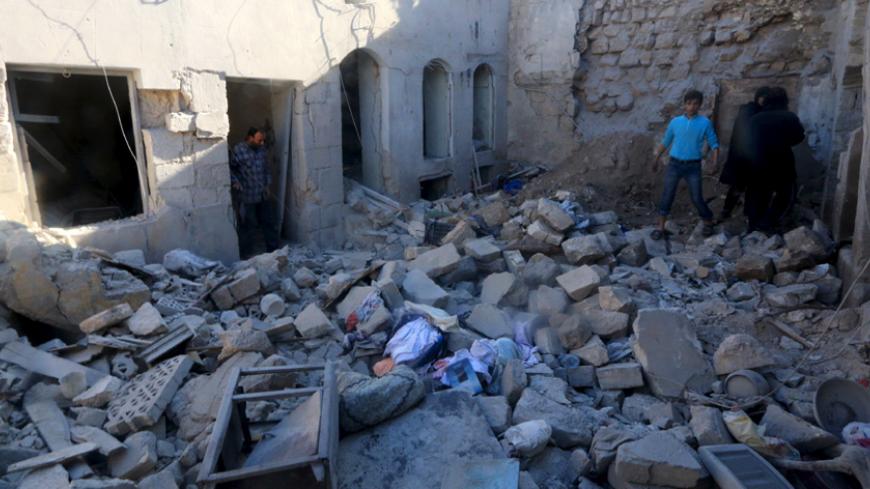 Residents inspect damage at a site hit by what activists said were airstrikes by forces loyal to Syria's President Bashar al-Assad in Aleppo, Dec. 25, 2015. - REUTERS/Ammar Abdullah

The meaning of Aleppo

The give and take over which opposition parties and individuals are represented in the peace talks may in the end be a sideshow for the real trend in Syria, which is the progress of the Syrian army, backed by Russia and Iran, in retaking territory from the Islamic State (IS), Jabhat al-Nusra and other armed groups. Who is winning on the battlefield matters more than who fills the chairs in Vienna or Geneva, although this is not to disparage the many positive contributions the International Syria Support Group (ISSG) can and will make to help Syria’s transition. But the Syrian endgame is more likely to be found in Aleppo rather than in well-intentioned ISSG meetings in European cities.

This column wrote in November that the battle for Aleppo could determine Syria’s fate. It is worth reflecting on the meaning of Aleppo for Syria and the region. Aleppo, Syria’s largest city and its commercial hub, was also known as the “city of light” for its refined people and culture. There was no real legacy of oppression in Aleppo beyond the agonies and constraints of doing business with the Assad family and its various agents and enterprises. Aleppo is not Homs, and it is not Daraa, where there are histories of popular grievances. The Assads, by design, kept it that way.

Aleppo, therefore, represents the failed promise of the terrorist and armed groups that have offered little more than Islamic law and criminality. Aleppo, which is mostly Sunni, was sold a sectarian bill of goods by the opposition. And it has been a disaster for the people of Aleppo. The Syrian government’s barrel bombs and relentless sieges added to an unbearable existence.

The tide may be turning. If the Syrian army, backed by its Iranian and Russian allies, retakes Aleppo, the city’s liberation will come by directly defeating terrorists and armed groups that are already deserting the battlefield. A government victory would be of a different order and have a different impact than the negotiated departures of besieged armed opposition forces in Homs and around Damascus. The people of Aleppo would experience a flat-out victory by the government and a defeat, and exodus, by the armed groups.

A good question is whether the Syrian army would be received as liberators by those Syrians, including Sunnis, freed from the reign of Islamic law and armed gangs. The answer might surprise those who would prefer to engage with the likes of Zahran Alloush and the “Army of Islam” (see below).

A Syrian government victory in Aleppo could be the beginning of the end of the sectarian mindset that would have been alien to the city prior to 2011. There is no more appropriate city to begin Syria’s healing. A Syrian government victory in Aleppo will make it harder to rationalize Western backing for jihadi groups who want to keep up the fight against long odds in the rest of the country. IS and al-Qaeda may prefer, over time, to begin to relocate to Libya and other countries where they can avoid the pounding from the US-led anti-IS coalition and Russian- and Iranian-backed Syrian forces. This may already be happening, and if so, it is to be cheered by those who seek a unified, secular and nonsectarian Syria, as outlined in the Vienna Communique, and as is Aleppo’s tradition.

Should the US blur lines on jihadi armed groups?

This column has warned for more than two years of the campaign to mainstream radical jihadi groups under the rubric of the “moderate” Syria opposition. This trend has done a disservice to the true secular, democratic opposition that rose against Syrian President Bashar al-Assad in 2011. In November 2015, we advocated keeping Ahrar al-Sham out of the Syrian political process, despite the group’s purported influence “on the ground,” which is at least in part due to its collaboration with the al-Qaeda-linked Jabhat al-Nusra terrorist group. Unfortunately, Syrian democrats can’t rely on the largesse of regional patrons who don’t mind a sectarian edge to the anti-Assad military campaign. Even prominent former American diplomats are ready to welcome Ahrar al-Sham and their fellow jihadi travelers into the peace fold, as long as there is some tactical divergence with Jabhat al-Nusra and these groups are willing to “engage” with the West.

Ali Mamouri provides further evidence of the recklessness of this position with an in-depth analysis of the views of Alloush, head of the Jaish al-Islam armed group, which is part of the Syrian Islamic Front, who was killed by a Russian airstrike in Uthaya on Dec. 25.

Alloush was backed by Saudi Arabia and attended the Syrian opposition conference in Riyadh last month. He was a “visionary” in the literal sense of the word, meaning he had visions of the coming caliphate prior to an imminent “end times.” Mamouri describes an apocalyptic, anti-Shiite rant by Alloush in a 2013 video “from a place called the Palace of the 10th Umayyad Caliph Hisham ibn Abd al-Malik, located in the city of Resafa, southwest of Raqqa, Alloush announced the re-establishment of the Umayyad caliphate in the Levant and other Muslim countries. The Umayyad had ruled the Islamic world from 661 until 750, founding an empire that stretched all the way to China. They were known for their persecution of the first Shiites, which caused the latter to despise and distance themselves from the Ummayyad. ‘We will bury the heads of impure Shiites in Najaf, God willing. The Umayyad glory will return to the Levant in spite of you,’ Alloush said in the video recording. He continued his anti-Shiite speech basing his statements on a prophecy mentioned in the Sunni accounts about the Prophet Muhammad.”

The United States is wrestling with how to manage Ahrar al-Sham, Jaish al-Islam and other Salafi opposition groups that have collaborated or are collaborating with Jabhat al-Nusra and that advocate Islamic law in Syria. Saudi Arabia, Qatar and Turkey want these groups in the Syrian peace talks as agents of influence for a post-conflict Syria. No matter that their political objectives seem a disconnect with the principles of the ISSG’s Vienna Communique, which recognizes Syria’s “secular” character as “fundamental,” and calls for a political process leading to “inclusive, non-sectarian governance.”

On Dec. 28, Mark Toner, a US Department of State spokesman, commenting on the airstrike that killed Alloush, expressed “significant concerns” about Jaish al-Islam’s battlefield tactics but nonetheless noted that the group “has supported a political process to end the conflict and has fought against [IS]. … So the strike on Alloush and others in Jaish al-Islam and other opposition groups do, in fact, complicate efforts to bring about meaningful political negotiations and a nationwide cease-fire.”

On the one hand, there is an understandable sense of urgency about ending the war, given the conflict’s terrible costs, and a cease-fire requires dealing with forces on the ground to end the fighting. On the other hand, the radical ideologies of these groups, and their openness to collaboration with Jabhat al-Nusra, present the possibility of wolves in the fold, should peace talks ever get underway.

Mamouri concludes that “what is described as moderate in Alloush’s approach boils down to his approval of dealing with Western and regional countries and accepting their aid so as to achieve the prophecy. Meanwhile, the more radical groups, such as IS, squarely reject any dealings with these countries. Yet the difference between the two sides remains in the preliminary tactic and not in the basic principles and ultimate goals. There are different orders in Salafi jihadism, all working toward the same ultimate goal of establishing the Islamic caliphate. It is true that the means to achieve this dream differ, but they share the same ideological denominator, which is obvious in their arbitrary handling of citizens’ civil and intellectual rights. Therefore, labeling some less politically extremist groups as moderate and supporting them regardless of their ideology will eventually lead to anti-democratic practices, the abolition of human rights-related issues and freedoms and the promotion of radical trends.”

Osama Abu Zeid, legal adviser for the Free Syrian Army (FSA), said the US “is gradually moving from a neutral position toward being a partner in crime as it allows Assad and his allies to kill Syrians. Scary massacres are being committed against Syrians, who have been left to starve to death under siege in the city of Madaya and [killed] by chemical weapons. Syrians are paying a high price as a result of the US policy failure in Iraq and its weakness in the Middle East in general.”

In an exclusive interview with Mohammed al-Khatieb, Abu Zeid called for a safe zone in Syria and said, “It is not required that the US send fighters on the ground. This is not what we want. What we want is for Assad to be prevented from targeting civilians and for the [supporters] of the Syrian revolution [i.e., Turkey, Qatar and Saudi Arabia] to be allowed to provide rebels with qualitative weapons. The US supports the Syrian Democratic Forces, which include al-Sanadid Army, one of the regime's militias. We, however, do not trust these forces, and they not surprisingly getting weapons that are hundreds of times more numerous than the weapons received by the FSA.”

Abu Zeid credits the Russian intervention with unifying many of the disparate Syrian armed groups, telling Al-Monitor, “I personally refused to meet with the Russian president's special representative for the Middle East, Mikhail Bogdanov, in Geneva about two months ago. Perhaps, in the eyes of Russia, Assad is the commander of the Syrian revolution. Russia’s declaration that it supports the FSA is ridiculous as all facts prove the contrary. Russian airstrikes are ongoing around the clock, targeting our sites and locations. Our position is clear: We will not coordinate or cooperate with Russia.”

Abu Zeid said that the FSA and its allies are essential to defeat IS. “IS cannot be eliminated without the FSA,” said Abu Zeid. “We have a history of struggle against all of those who killed Syrians. Therefore, no one can question the FSA’s objectives when it fights IS, because its project is purely Syrian, and it aims to protect Syrians rather than serve other agendas.”

Barbara Slavin reports this week that former Secretary of Defense Chuck Hagel said, “We have allowed ourselves to get caught and paralyzed on our Syrian policy by the statement that ‘Assad must go,’” adding, “Assad was never our enemy.”

Speaking at the Atlantic Council in Washington, Hagel faulted President Barack Obama for declaring a “red line” against chemical weapons use by the Syrian government and then stepping back from carrying out missile strikes to enforce it in 2013, saying, “When a president of the United States says something, it means something. … To make those kinds of pronouncements and not follow through affects the credibility of the president.”