UN Syria envoy Staffan de Mistura warns that the cessation of hostilities is in “great trouble.” 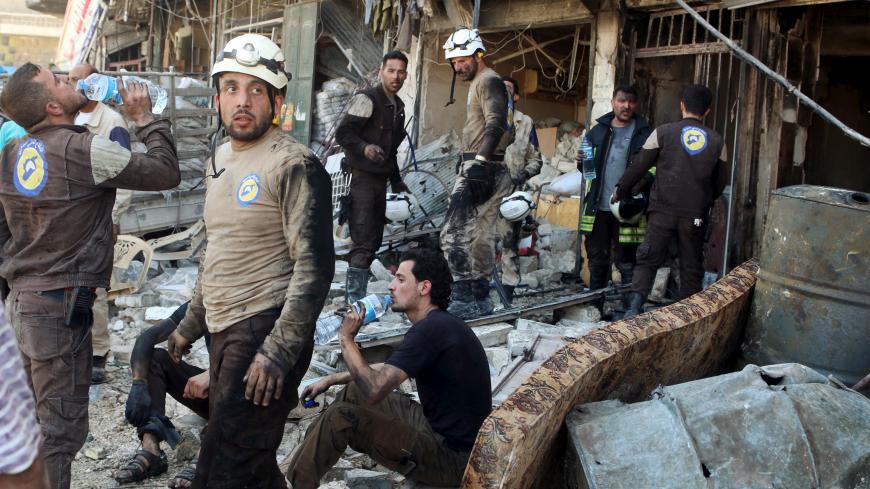 Civil defense members rest amid the rubble of damaged buildings after an airstrike on the rebel-held Tariq al-Bab neighborhood of Aleppo, April 23, 2016. - REUTERS/Abdalrhman Ismail

UN Syria envoy Staffan de Mistura said April 22 that the cessation of hostilities that began Feb. 26 “is still in effect. None of the sides have renounced to it. … But it is in great trouble if we do not act quickly.”

Speaking in London the same day, US President Barack Obama said that the cessation of hostilities is “fraying,” adding that although he has “always been skeptical about Mr. [Russian President Vladimir] Putin’s actions and motives inside of Syria … we are going to play this option out. If, in fact, the cessation falls apart, we’ll try to put it back together again even as we continue to go after ISIL [Islamic State].” The day before, in remarks in Riyadh with Saudi King Salman bin Abdul-Aziz Al Saud, Obama said, “The cessation of hostilities is obviously under tremendous strain, including continued violations by the [Bashar al-] Assad regime. This violence is yet another reminder that there’s only one way to end this civil war, as our GCC [Gulf Cooperation Council] partners agree — a transitional governing body, a new constitution with free elections, including a transition away from Assad.”

Press reports and US officials have blamed the erosion of the fragile cease-fire primarily on Iranian- and Russian-backed Syrian forces, while noting a buildup of Russian artillery around Aleppo in preparation for a likely offensive. No doubt the Syrian government is seeking to press its advantage, even as its delegation stays on in Geneva to continue the UN “proximity” talks. But the situation on the ground deserves a closer look.

The Economist notes that the Syrian government has gotten away with its attacks on Aleppo until now “in part because the opposition there is dominated by Jabhat al-Nusra, al-Qaeda’s affiliate in Syria, one of the terrorist groups excluded from the cease-fire, along with Islamic State (IS).” The highly regarded Institute for the Study of War reports that Ahrar al-Sham, Jaish al-Islam, the Free Syrian Army (FSA) and other armed groups had formed the Rad al-Mazalem Operations Room to undertake military operations against Syrian government positions in the Latakia region. The report also notes, “Salafi-Jihadist groups Jund al-Aqsa and the Turkestan Islamic Movement seized the village of Khirbet a-Naqous in the Sahl al-Ghab plains of northwestern Hama Province.” The Russian Ministry of Defense blamed Ahrar al-Sham for cease-fire violations around Latakia and Aleppo, and Jaish al-Islam for mortar attacks around Damascus.

Sardar Mlla Drwish reports this week for Al-Monitor on the fighting in the Sheikh Maksoud neighborhood of Aleppo, where the US-backed Syrian Kurdish People’s Protection Units (YPG) have been battling an array of armed groups. Human Rights Watch has condemned the “indiscriminate attacks” that have continued during the cessation of hostilities, including a Syrian government airstrike on Deir al-Assafir on March 31 that killed at least 31 civilians. Tom Rollins reports on the consequences of the fighting between Jabhat al-Nusra and IS in the Yarmouk refugee camp.

Let’s put aside who is responsible for the erosion of the cessation of hostilities, as there seem to be plenty of violations to spread the blame. One could even, for the sake of argument, assume that culpability lies primarily with the Syrian government. Even so, the increased coordination of the FSA with Ahrar al-Sham, Jaish al-Islam and other foreign-backed Salafi groups that, depending on the political currents, are barely one degree of separation from Jabhat al-Nusra, al-Qaeda’s affiliate in Syria, should be cause for alarm.

This column has not pulled its punches about Ahrar al-Sham and Jaish al-Islam, which we consider to be fellow ideological travelers with Jabhat al-Nusra, with which they have cooperated in the past. On both fact and principle, we prefer not to characterize them as “rebels” and question any lasting trend toward the “Salafization” of Syrian opposition politics. These extremist groups should be marginalized, not mainstreamed, in the Syrian opposition. Secular patriots in the opposition have had to swallow hard in dealing with both groups, who — while also being adversaries of Assad — have access to money and arms from foreign patrons who share their radical agenda at the expense of the Syrian people. Absent this foreign support, we question their attraction and staying power.

And there is another possible catch. UN Secretary-General Ban Ki-moon told reporters April 8 that his office was coordinating with the Organization for the Prevention of Chemical Weapons to investigate reports that Jaish al-Islam had used chemical weapons against Kurdish groups in Aleppo. A Jaish al-Islam statement April 7 said that a commander had been reprimanded for using “weapons not authorized for use in these types of confrontations,” which it later claimed were “modified Grad rockets,” not chlorine or chemical gas.

Whether Jaish al-Islam used chemical weapons or not, the revelations of an increasingly assertive role by it, Ahrar al-Sham and other Salafi groups should be a reminder that the only viable approach to a settlement in Syria is more, not less, coordination between the United States and Russia to rally the regional parties to marginalize these groups while keeping pressure on the Assad government to cease bombardment of civilian areas and expand humanitarian relief to besieged areas.

As we warned last week, there is no viable plan B for Syria, especially if such a plan depends on providing advanced weaponry to groups such as Ahrar al-Sham and Jaish al-Islam, or the potential for such weapons to end up in their hands. The maneuvering of these groups is too tactical, their ideology too clearly radicalized and the lines between them and Jabhat al-Nusra too blurry. An alternative plan might be to rethink how best to deal with an anticipated Russian- and Iranian-backed advance on Aleppo, where IS, Jabhat al-Nusra and Salafi groups still hold sway. Rather than seeing such an operation, if it occurs, as a deal killer for a cease-fire, perhaps a more fruitful approach would be for the United States and Russia and their respective allies to coordinate their operations in Aleppo to target Jabhat al-Nusra and IS forces and reduce civilian casualties. This column has written that the liberation of Aleppo could be a turning point in the Syrian war and a devastating setback for the forces of radicalization. The United States and its regional partners should engage, rather than resist, that outcome.