A Syrian official suggests "federalization" could be the outcome of the political reform discussions, as the Obama administration holds the line on calls for airstrikes against the Syrian government. 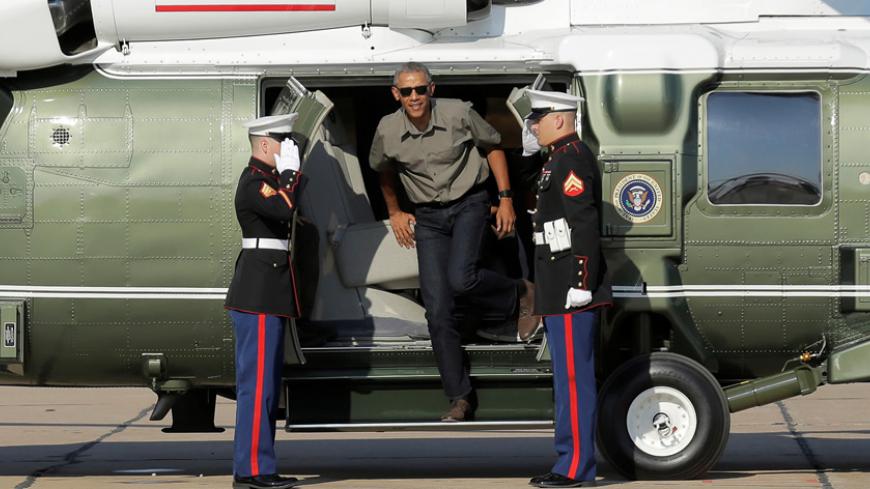 US President Barack Obama steps from Marine One before walking to Air Force One as he departs from Roswell, New Mexico, June 17, 2016. - REUTERS/Joshua Roberts

Jean Aziz, reporting from Damascus, describes an almost eerie normalcy and confidence in the Syrian capital, despite the sound of missiles in the distance. Syrian politicians and officials are quietly planning the nature and extent of political reform in Syria, in consultation, of course, with Moscow and Tehran.

A Syrian official told Aziz, “We have gone beyond the stage of discussing the fate of the regime or tackling the regime members. Today, we are [in] a battle to define the regime’s form, its work mechanisms and its way of dealing with the Syrian people and with Syria [itself]. Some are speaking of a federation and a decentralized system, among other forms, like Kurds, Russians and even [President] Bashar al-Assad himself. This is what is being discussed today. The rest is behind us.”

Commenting on a reported Russian draft of a new Syrian Constitution, the Syrian official added, “We have made some comments on this draft. The pluralism mentioned therein is secured under the local administration law in Syria and is therefore constitutionally guaranteed. Therefore, there is no need for any [changes] in this regard.”

Iran is actively involved in the deliberations on political reform. Iranian Foreign Minister Mohammad Javad Zarif explained to Laura Rozen in an email on June 16, “I have said all along that there will be no solution if we focus on any individual, because it is a zero-sum question that will inevitably lead to stalemate and deadlock. … The answer is to focus on institutional dispersion of power and the future form of governance, through which you may be able to reduce or even eliminate the centrality of the role of any individual or ethnicity."

US Secretary of State John Kerry had said Jan. 18 that Iran’s proposal for reform in Syria was “very close” to what was envisaged in the Geneva talks, and “needs to be explored.”

Zarif’s comments on the need for a political solution in Syria complement, and do not contradict, the shared interest of Syria, Iran and Russia in eradicating terrorist armed groups from northern Syria and Aleppo as a prerequisite for meaningful political negotiations. Although Abbas Qaidaari reports from Tehran on rumors of some uncertainty about Russia’s ultimate objectives in Syria, the three countries are in agreement on a military approach to Syria “that does not lead to terrorists building up their powers,” as Iranian Defense Minister Brig. Gen. Hossein Dehghan said, referring to actions by Jaish al-Fatah and other armed opposition groups that have coordinated attacks with Jabhat al-Nusra in northern Syria under the cover of the cessation of hostilities.

In Syria, the conversation has moved beyond whether or not the Syrian military plans to defend and hold “useful Syria” or retake the rest of the country. A Syrian parliamentarian told Aziz, “We are determined to restore the Syrian territory entirely. Our troops are still in Deir ez-Zor [in the east] to date and this is sufficient evidence. The battle has moved to Raqqa now. But around Damascus, we are keen to reduce [the numbers of] our army and we want to start with the liberation of areas that are more strategic than others.”

A misguided "dissent" on Syria

The Obama administration is so far holding the line on its Syria policy despite a “dissent” cable from 51 State Department officials calling for military strikes against the Syrian government.

In an initial response, the White House noted June 16 that the cessation of hostilities, despite violations, has allowed aid to reach 820,000 Syrians over the past four months.

The result of understandable frustration, the recommendation of military strikes against the Syrian government — no matter how well intentioned — is, in the end, escalatory, and would likely result in more war, killing, refugees, less humanitarian aid reaching civilians, the empowerment of jihadis and so on.

We admit to not following the logic of how such an escalation — which would probably risk US-Russia ties, UN-mediated talks, the International Syria Support Group, possible US-Iran understandings in Iraq and other conflict regions, and just about every other fragile bit of hard-earned and admittedly fragile diplomatic progress earned in the last eight months — would somehow be worth the numerous downsides in the hope it would “convince enough Syrian Sunni Arabs to fight the Islamic State,” as former US Ambassador to Syria Robert Ford told Laura Rozen.

Perhaps what is actually meant is that military strikes would allow some form of deal with US partners in the region — which have been regularly called out by senior US officials for not doing their share in the anti-IS coalition, and which back Salafi and jihadi groups, such as Ahrar al-Sham and Jaish al-Islam, which have allied themselves with Jabhat al-Nusra, al-Qaeda’s affiliate in Syria — to, finally, step up against IS in return for the United States placing itself on the slippery slope of unintended consequences and another regime change endeavor in the Middle East, although the cable explicitly says that regime change is not the intended outcome of military action.

By the way, the role of these Salafi groups — as well as their violations of the cessation of hostilities, their foreign backers and their relationship with Jabhat al-Nusra — is missing from the dissent cable. Indeed, there is no mention of Jabhat al-Nusra at all, nor is there acknowledgement of the growing international terrorist threat from IS, such as that referenced in the testimony of CIA Director John Brennan on June 16.

So count our strong dissent from this misguided dissent, especially because, perhaps unintentionally, in addition to probably blowing up the diplomatic framework and the thin reed of hope and aid it has offered the Syrian people, this sectarian-first thinking would further mainstream jihadi armed groups that ally with al-Qaeda’s Syrian affiliate. This column has documented how Ahrar al-Sham in particular, and other Salafi groups, have deepened coordination with Jabhat al-Nusra and violated the cessation of hostilities since February. Jaish al-Islam, it will be recalled, is being investigated for the use of chlorine gas in northern Aleppo. The Institute for the Study of War reports that last week the Jaish al-Fatah coalition, which includes Jabhat al-Nusra and Ahrar al-Sham, attacked Khalasah, a Syrian government town.

We also share the Obama administration’s instinctual caution about the use of force in the Middle East, especially recalling the experiences in Iraq and Libya, which are ongoing, and, we believe, not worth emulating (and reference to which are also left out of the dissent cable).

Instead of chucking all of the hard-earned diplomatic gains to date, another alternative is that the United States could take up the Russian offer for increased coordination to target Jabhat al-Nusra, while keeping US-backed groups out of Russia’s line of fire. The United States and Russia may be closer to an agreement regarding coordination of military targeting. This approach would preserve the fragile diplomatic framework for the Syria talks and the cessation of hostilities, expand operations against al-Qaeda’s affiliates and hold Russia to account for hitting moderate opposition forces and civilians.