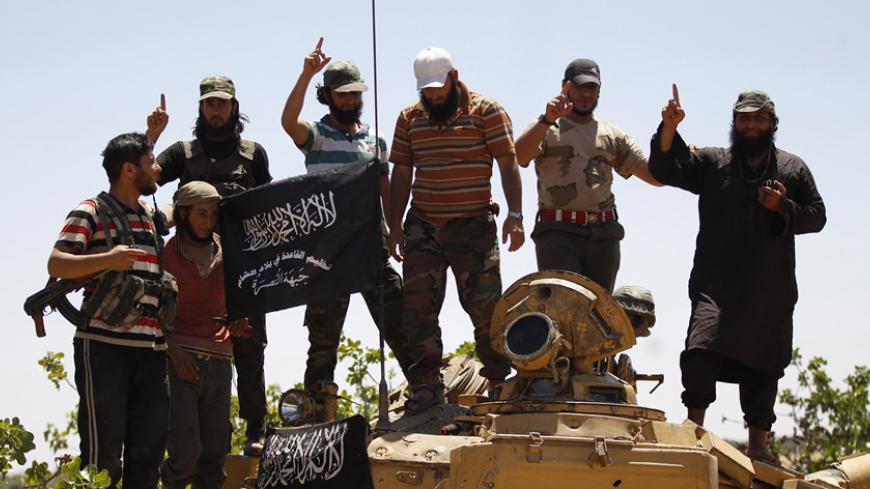 Amnesty International released on July 5 a groundbreaking account of the "reality of life" for Syrians living in Idlib and Aleppo under the rule of Jabhat al-Nusra, al-Qaeda’s affiliate, and other armed groups, including those backed by US regional allies.

In a news release, Philip Luther, Amnesty International’s director of the Middle East and North Africa Program, said, “In Aleppo and Idlib today, armed groups have free rein to commit war crimes and other violations of international humanitarian law with impunity. Shockingly, we have also documented armed groups using the same methods of torture that are routinely used by the Syrian government,” which is responsible for the majority of human rights and war crimes committed during the war.

The report titled “Torture was my punishment” provides a grim and unsettling account of abduction, torture and summary killings, including the deliberate targeting of journalists, lawyers and even children, by members of the so-called Aleppo Conquest coalition, which includes Jabhat al-Nusra, Shamiya Front, Nureddin Zengi Brigade and Division 16, and the Ahrar al-Sham Islamic movement in Idlib, which is allied with Jabhat al-Nusra in Jaish al-Fatah (Army of Conquest).

Amnesty International pulls no punches in making clear that some of these groups “enjoy support from powerful backers such as Qatar, Saudi Arabia, Turkey and the USA.”

The report comes as the United States continues to weigh potential cooperation with Russia against Jabhat al-Nusra, as Laura Rozen reports.

Rozen cites congressional testimony June 28 by Brett McGurk, US special presidential envoy for the Global Coalition to Counter ISIL (Islamic State), that while the Islamic State “is losing territory in the east,” Jabhat al-Nusra is “gaining ground in the west, putting down roots in Idlib province along the Turkish border. … With direct ties to Ayman al-Zawahri, Osama bin Laden’s successor, Nusra is now al-Qaeda's largest formal affiliate in history. … This is a serious concern, and where we see Nusra planning external attacks, we will not hesitate to act.”

With its increasing emphasis on both the potential for US-Russia cooperation and the threat from Jabhat al-Nusra, the Obama administration seems to have brushed aside the course advocated by a "dissent" cable deliberately leaked by anonymous State Department diplomats calling for US military escalation against the Syrian government. As we noted in this column before, among the cable’s many failings was that it did not even once refer to Jabhat al-Nusra, and therefore, it seems, its authors were either ignorant, or dismissive, of the administration’s own grave assessment of the threat from the expansion of Jabhat al-Nusra, in addition to the crimes of those armed groups allied with the al-Qaeda affiliate.

Rozen adds, “While US officials have expressed understanding for the Syrian opposition’s concerns that more pressure on Jabhat al-Nusra could threaten their position vis-a-vis [President Bashar al-] Assad, the US officials indicate that President Barack Obama feels he has the duty to deal with the threat to US national security interests posed by Jabhat al-Nusra and to do so quickly.”

Obama deserves credit for keeping the focus exactly where it should be: on the threat to the United States and its allies from the expansion of terrorist groups in Syria. We have consistently taken the line that there should be no “understanding” — absolutely none — for those who ally with al-Qaeda’s Syria affiliate. Last week, we referred to a Washington Post editorial that cited “several experts on Syria” arguing that US-Russia coordination would be a bad deal because “Jabhat al-Nusra forces are intermixed with other rebel units.” As these “experts” seemed to have missed the numerous UN Security Council resolutions penalizing any cooperation with al-Qaeda and its affiliates and al-Qaeda’s well-known record of global terrorism, perhaps McGurk’s testimony and the Amnesty International report will finally force The Washington Post to reconsider who it consults on Syria. Giving al-Qaeda a pass, for any reason, should rule you out of the “expert” category.

The Amnesty International report also helps clarify a twisted and dangerous misunderstanding about conditions in Aleppo and Idlib, and what it might mean for the course of the war. As Al-Monitor wrote in January, “Aleppo, which is mostly Sunni, was sold a sectarian bill of goods by the opposition. And it has been a disaster for the people of Aleppo. The Syrian government’s barrel bombs and relentless sieges added to an unbearable existence. … If the Syrian army, backed by its Iranian and Russian allies, retakes Aleppo, the city’s liberation will come by directly defeating terrorists and armed groups that are already deserting the battlefield. A government victory would be of a different order and have a different impact than the negotiated departures of besieged armed opposition forces in Homs and around Damascus. The people of Aleppo would experience a flat-out victory by the government and a defeat, and exodus, by the armed groups. A good question is whether the Syrian army would be received as liberators by those Syrians, including Sunnis, freed from the reign of Islamic law and armed gangs. The answer might surprise … a Syrian government victory in Aleppo could be the beginning of the end of the sectarian mindset that would have been alien to the city prior to 2011.”