By separating from its parent organization, Jabhat al-Nusra — now Jabhat Fatah al-Sham — could attract members who had been hesitant to be associated with al-Qaeda. 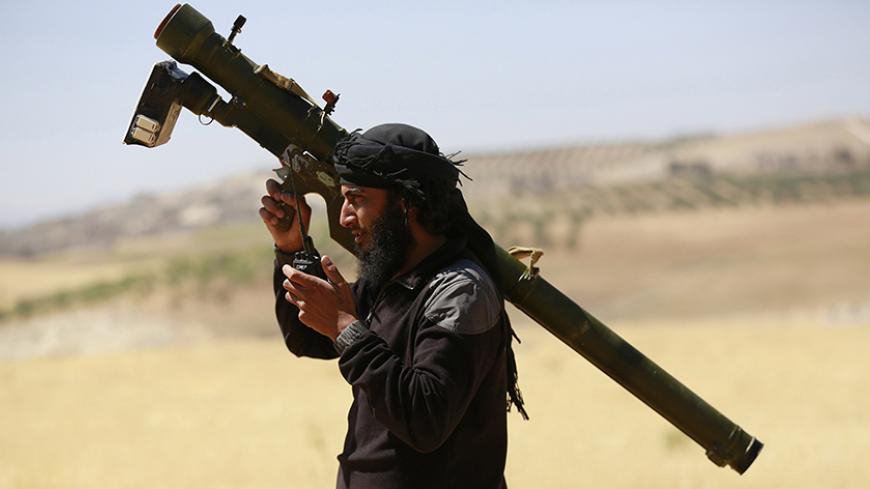 An Islamist Syrian rebel from Jabhat al-Nusra talks on a walkie-talkie while carrying his weapon on the al-Khazan front line of Khan Sheikhoun, northern Idlib province, May 17, 2014. - REUTERS/Hamid Khatib

On July 28, Jabhat al-Nusra announced it was severing all ties with its parent organization, al-Qaeda, and changing its name to Jabhat Fatah al-Sham (Conquest of Syria Front). Al-Qaeda gave its blessing to the move, reflecting an evolution by both organizations in their international strategies and a deep understanding of local Syrian dynamics.

Jordanian Salafist expert Hassan Abu Haniya, however, questions how much distance the secession will really put between the groups due to their complex ideological, historical and personal links.

Jabhat al-Nusra leader Abu Mohammed al-Golani appeared on camera late last month declaring “the complete cancellation of all operations under the name of Jabhat al-Nusra." He said the new organization has no affiliation with any external entity.

On July 28, al-Qaeda's second-in-command, Ahmed Hassan Abu al-Khayr, announced that Jabhat al-Nusra’s leadership had been instructed to “go ahead with what protects the interests of Islam and Muslims and what protects jihad." Al-Qaeda’s No. 1 leader, Ayman al-Zawahri, added, “The brotherhood of Islam … is stronger than any organizational links.”

Yet Abu Haniya noted that Golani's announcement carried many references to al-Qaeda: Golani was dressed in military fatigues, like the late al-Qaeda founder Osama bin Laden, and used Arabic expressions and references used by the infamous leader.

In addition, al-Qaeda's second-in-command, Abu al-Khayr, who blessed the secession, is currently in Syria with the consent of Jabhat al-Nusra. “What does this tell you of the supposed [split] in relations? If there was a real break of the pledge of allegiance between the two organizations, it is supposed to be [according to jihadi practices] condemned by death,” said Abu Haniya. He said the groups' separation appears to be only tactical.

He added that the decoupling shows al-Qaeda prioritizes its affiliate’s survival. “Al-Qaeda has witnessed several phases since its inception as it went from a local organization [in Afghanistan] to a global organization after the September 2001 coordinated terror attacks on the United States, which was followed by a period of ‘indimaj,’ a period of mixed policies with a focus on both the far and close enemies. Now we are witnessing a return to the primacy of local dynamics,” Abu Haniya stressed.

The expert added that the transformation also indicates al-Qaeda's move since the Arab Spring to an emphasis on Syria-centered politics.

That move to prioritizing local politics has translated into Jabhat al-Nusra adopting a pragmatic approach to external and internal pressures. On July 13, Russia and the United States discussed forming a Joint Implementation Group to share intelligence, to possibly direct operational cooperation against Jabhat al-Nusra and to keep Russia from targeting jointly designated, and presumably opposition-controlled, areas.

The new US-Russian partnership might have accelerated Jabhat al-Nusra’s departure from al-Qaeda. In his statement, Golani said the Syrian opposition to the regime has to “remove the pretext used by powers, including the US and Russia, to bomb Syrians.”

Internal pressures also might have influenced Jabhat al-Nusra’s leadership decision. In the past year, the group held various discussions toward that goal, with Jabhat al-Nusra member Abu Maria al-Qahtani of Iraq arguing for the “Syrianization” of Jabhat al-Nusra, according to Syrian Islamic sources. “Syrian members of Jabhat al-Nusra who represent the large majority were also in favor of severance of ties with al-Qaeda,” Sheikh Hassan Dgheim, a Syrian cleric who studies Islamic organizations, told Al-Monitor.

Aleppo-based journalist Ahmad Abi Zeid told Al-Monitor many Syrians within Jabhat al-Nusra do not necessarily espouse al-Qaeda’s ideology, but have joined the organization because of the power it projects.

However, Abu Haniya believes the break with al-Qaeda was the result of a simple opportunity-and-threat analysis. “Jabhat al-Nusra felt it was losing popularity, and it affected their relations with other groups. Since the break, the rebel coalition was given new impetus with the Aleppo offensive.” On July 31, rebel groups launched the “Great Battle” (malahem) on Aleppo, which is still underway.

Dynamics marking the fresh Aleppo offensive by a large rebel alliance, including Jabhat Fatah al-Sham, confirm Jabhat al-Nusra’s successful calculation to decouple from al-Qaeda. The separation allowed the new group to consolidate its presence on Syrian soil and form alliances with other rebel groups that previously were hesitant to join forces with them due to the al-Qaeda affiliation.

“The rebranding and fresh victories will add credibility to Jabhat Fatah al-Sham. This will certainly have repercussions on factions that were previously afraid of being targeted by cooperating with [al-Qaeda]. Salafist and Islamic factions will definitely perceive this move positively,” Abi Zeid said.

Nonetheless, severing ties with the global jihad movement may also place the organization at a disadvantage. Dgheim underlines that in the past three months, several members of the group defected to join the Islamic State. This phenomenon may indicate a wider dissatisfaction among Jabhat al-Nusra’s hard-liners, specifically its foreign fighters. Abu Haniya, however, disagreed.

“The decision to break ties with al-Qaeda had the approval of foreign leaders within the organization. During the secession announcement, Golani surrounded himself with a Syrian national, Abu Abdullah al-Shami, and a foreign fighter, Ahmad Salama Mabruk, also known as Abu Faraj the Egyptian, which is highly symbolic and shows the prevalence of its foreign affiliation,” Abu Haniya explained, adding that the number of defections to this date has been limited.

Regardless of the repercussion of its name change on the Syrian scene, Jabhat al-Nusra’s decision to rebrand is a clear indicator of al-Qaeda’s repositioning in the Levant. Jabhat Fatah al-Sham’s new coalitions and its view of the Syrian political system and the peace process will reveal the extent of the organization’s pragmatism and whether it is really willing to evolve.