Fear of US and Russian airstrikes on eve of Syrian offensive a sign that Jabhat al-Nusra may be feeling the heat; Turkey’s de-Gulenification campaign in context; retired Saudi general probes Israeli commitment to peace settlement. 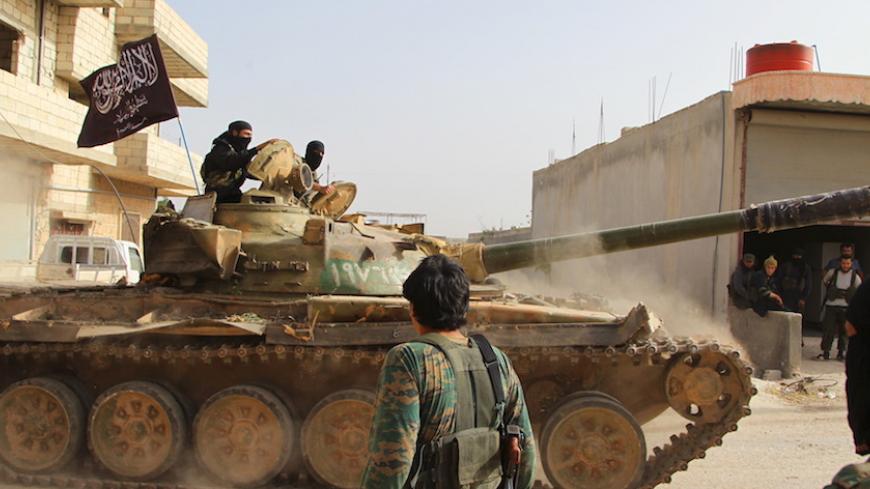 Members of Jabhat al-Nusra ride on a tank as they head toward their positions during an offensive to take control of the northwestern city of Ariha from forces loyal to Syria's President Bashar al-Assad, in Idlib province, May 28, 2015. - REUTERS/Ammar Abdullah

Nobody buying the "new Nusra"

The announcement by Jabhat al-Nusra on July 28 that it was severing ties with al-Qaeda may be a sign of the terrorist organization’s increasing desperation. Russian and Iranian-backed Syrian forces have now encircled east Aleppo, where Jabhat al-Nusra and its Aleppo Conquest coalition allies have instituted brutal Sharia rule, as documented by Amnesty International. US-Russian negotiations may soon produce an agreement on military coordination that would bring further bad news for what is now called the Front for the Conquest of Syria, or Jabhat Fatah al-Sham.

The roll-out by Jabhat al-Nusra of its new brand would have been laugh-out-loud funny if there was a place for humor when dealing with the al-Qaeda affiliate and its bloody record in Syria and worldwide. Ahmed Hassan Abu al-Khayr, the deputy to al-Qaeda leader Ayman al-Zawahri, announced that Zawahri had ordered the split “for the good of Islam and the Muslims.” Soon after, Al Jazeera television treated us to the smiling face of Jabhat al-Nusra leader Abu Mohammed al-Jolani, who reassured viewers that the terrorist group is not giving up any of its core beliefs and still reveres Osama bin Laden, and that the shift was a means to remove the "pretext" for the United States and Russia to conduct joint airstrikes.

The message should now be sent to Jabhat al-Nusra’s collaborators in Syria, including and especially Ahrar al-Sham, a front-and-center ally of Jabhat al-Nusra in northern Syria, that nobody is buying the switch and there is no reprieve. Those regional powers that continue to back Ahrar al-Sham and other Jabhat al-Nusra collaborators should be told, unambiguously, that the game is up. The Aleppo Conquest coalition organizations working with Jabhat al-Nusra, as documented in the Amnesty International report, are practitioners of an ideology and governance that is barely distinguishable from the Islamic State (IS). These armed groups therefore should not be characterized as “rebels” or “opposition.” As Raqqa may soon be "liberated" from IS, east Aleppo may soon be "liberated" as well from this al-Qaeda-led coalition.

The Obama administration should take Jabhat al-Nusra’s move as further validation of its Syria policy. US Secretary of State John Kerry has shaken off the misguided and muddled rationales of the "dissent" crowd to forge ahead with US-Russian negotiations; to keep the focus on the terrorist threat to the United States and its allies, which is growing; to try to kick-start political talks between the Syrian government and opposition parties; and to provide as much humanitarian relief as possible.

The pending Aleppo offensive makes the case for US-Russia coordination even more urgent. Laura Rozen writes that the United States and the United Nations were blindsided by the Russian announcement of four corridors for residents and members of armed groups to leave the city. More intensive coordination will be necessary before, during and after military operations.

The battle for Aleppo will have implications for the political talks. Bassam Barabandi, a member of the Syrian Opposition High Negotiating Committee, suggested to Rozen that UN Syria special envoy Staffan de Mistura may feel pressure from Russia to consider "a national unity government rather than a transitional government, during which Assad would stay in the transition but not run again in new Syrian presidential polls."

Mustafa Akyol writes this week that “the reason for this massive purge” in Turkey “must be understood first before being criticized.”

“The coup plot of July 15 was, arguably, the greatest assault the nation has ever seen since its founding in 1923,” Akyol writes. “In no previous coup or coup attempt was the nation’s parliament bombed or its civilians crushed by tanks. Moreover, not just the government, but also the chief of staff, the National Intelligence Organization, all major opposition parties, mainstream secular media, many anti-Erdogan journalists and most nongovernmental organizations seem to all agree that this coup was mainly a Gulenist operation, as a last-ditch effort to topple Erdogan, who had become the Gulenists’ No. 1 enemy."

Akyol continues, “One may wonder why this national consensus in Turkey is not reflected at all in Western media. My answer is that while Erdogan’s authoritarianism, of which I have been quite critical, is all blatant and clear, Gulenist operations are always stealthy, covered nicely by successful public relations and insistent denial of involvement. That is why many Western journalists keep on believing that the only problem in Turkey must be Erdogan and everybody who opposes him must be ‘good guys.’”

Akyol concludes by warning that the truth can only come out from a "fair trial," not an overly zealous purge to “cleanse the whole public sector” along the lines of the de-Baathification campaign in Iraq.

What next for Saudi Arabia and Israel?

Akiva Eldar explains the rationale and back story of the "unofficial" visit to Israel on July 22 by retired Saudi Gen. Anwar Eshki. Eshki’s public diplomacy in Israel included no surprises — both Israel and the kingdom are concerned about Iran, and Eshki made clear that an agreement along the lines of the 2002 Arab Peace Initiative depends first on an Israeli-Palestinian peace deal.

Eldar concludes, “Israel’s right-wing government portrays the public diplomacy being conducted by Egypt and Saudi Arabia as proof that its concept of 'peace in return for peace' has been successful. Important Arab states are willing to openly embrace us even though we have not given up one inch of the West Bank and even as we continue to control Al-Aqsa Mosque, conveniently forgetting Israel handing over Sinai Peninsula. Given the government’s current makeup, one outpost in the southern Hebron hills is equal to diplomatic relations with all the Arab states. To advance the Arab Peace Initiative and to change its place on the regional map, Israel must first change its own internal political map.”