De Mistura calls on Jabhat al-Nusra, Russia and Syria to end fighting in Aleppo; why is Erdogan mostly mum on Aleppo? 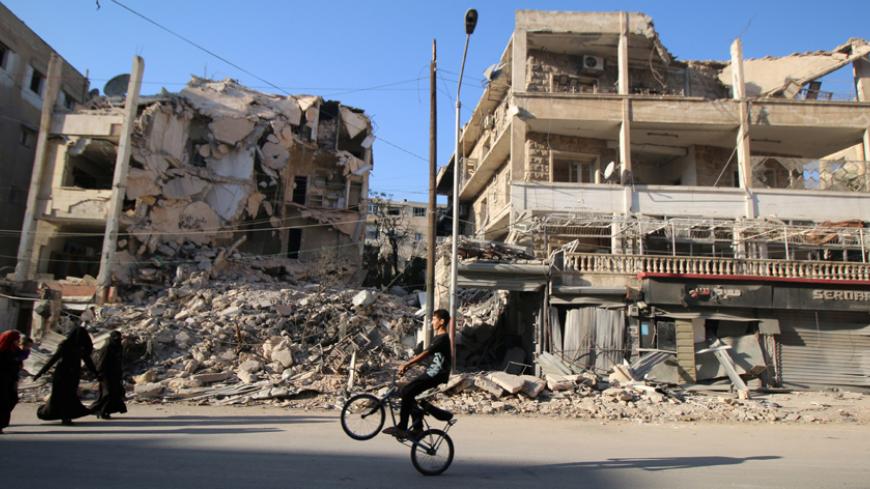 A boy plays with a bicycle past damaged buildings in the rebel-held Seif al-Dawla neighborhood of Aleppo, Syria, Oct. 6, 2016. - REUTERS/Abdalrhman Ismail

UN Syria Envoy Staffan de Mistura appealed directly to Jabhat al-Nusra, Syria’s al-Qaeda affiliate, on Oct. 6 to leave the city of Aleppo “because 1,000 of you are deciding the destiny of the 275,000 civilians.”

De Mistura offered to physically accompany the terrorists out of the city in order to alleviate the suffering of Aleppo’s besieged citizens, while calling on the Syrian and Russian governments to end the siege of the city “for the sake of eliminating 1,000 al-Nusra fighters.”

Jabhat al-Nusra, which broke from al-Qaeda and rebranded itself as Jabhat Fatah al-Sham (Conquest of Syria Front) in July, is designated as a terrorist organization by both the United States and the United Nations. Russia claimed that a reason for the collapse of the US-Russia agreement last month was the inability of the United States and its regional allies to separate American-backed Syrian opposition forces from Jabhat al-Nusra. The US-Russia agreement in Syria would have facilitated US and Russian military and intelligence coordination against Jabhat al-Nusra, in addition to allowing for humanitarian assistance and a resumption of UN-backed peace talks.

Jabhat al-Nusra’s role in Aleppo has been overshadowed, or left out, in most mainstream press accounts of the brutality of the Russian and Syrian siege of the city. On Oct. 7, Kerry said, “Russia and the [Syrian] regime owe the world more than an explanation about why they keep hitting hospitals and medical facilities and children and women” and called for an “investigation of war crimes.” During the vice presidential debate Oct. 4, both Democratic Virginia Sen. Tim Kaine and Republican Indiana Gov. Mike Pence called for the establishment of humanitarian or safe zones in response to the siege.

The understandable impulse to assist those Syrians who have suffered immeasurably, and too long, as a result of this awful war is heartfelt and laudable. For US policymakers, there is also the need to weigh the consequences of any military action, including reflection of what was learned from American interventions in Iraq, Libya and Afghanistan, and that even the establishment of humanitarian or safe zones would entail a “major combat mission,” in the words of US Defense Secretary Ashton Carter in May 2015, and therefore a “difficult thing to contemplate.”

Cengiz Candar wrote that “despite official statements to the contrary, Ankara and Washington are not cooperating in Syria. There's a lot of friction. Ankara acquiesces much more to its former adversary Russia than to its traditional ally, the United States.”

Mustafa Akyol added that Russia is exploiting the friction between Ankara and Washington over the extradition of Fethullah Gulen, whom the Erdogan government considers a terrorist and has accused of being behind the attempted military coup in July.

During a visit to Ankara on Oct. 2, Aleksandr Dugin, a “special representative” of Russian President Vladimir Putin, claimed that Russia had warned Turkey of the coup, which he said took place because of Turkey’s turn toward Russia.

“Since the failed coup attempt, Dugin’s call to Turkey has been played up in the Russian media as well. Pro-Kremlin websites fabricated two fake news stories in September showing that the United States was behind the plot,” Akyol wrote, adding that these stories “found strong echoes in Turkey, which is now more obsessed than ever with conspiracy theories.”

“A key element in this new Turko-Russian rapprochement is the common contempt for the followers of cleric Fethullah Gulen, the leader of the Islamic cult widely held responsible for the coup attempt,” Akyol explained. “Erdogan and his supporters think that Western powers, out of either naivete or malice, do not comprehend the threat the Gulenists pose for Turkey. In contrast, the Russians have long designated the Gulenists as a perilous group, closing all their schools and even banning the religious movement that identifies with it. That is why Ankara and Russia, even back in 2014, have long been in full agreement on the Gulenists. Now Russians are only adding that Ankara should see ‘the powers behind the Gulenists,’ as Dugin urged in the Moscow meeting.

“The common enmity for Gulenists also gave the two countries a chance to explain away the major rift they had in November 2015, when a Russian warplane was downed by the Turkish air force on the Syrian border,” Akyol continued. “This incident initiated a cold war between Ankara and Moscow, which ended only last June, when Erdogan reached out to the Russians with an apology. Soon, the pro-government media in Turkey also came up with the theory that the pilot of the Turkish jet that downed the Russian plane was a Gulenist, which may well have been the case, and acted with the sinister intention to break Turkish-Russian ties, which may well be a fantasy. But it seems to be a convenient fantasy on which both Dugin and his Turkish guests in Moscow agreed.”

Semih Idiz added that Erdogan’s relative quiet on the battle for Aleppo is yet another sign that his priorities are increasingly focused on rebuilding ties with Russia and prosecuting the military campaign in Syria against the Islamic State and the People’s Protection Units (YPG), which Ankara considers a terrorist group linked to the Kurdistan Workers Party in Turkey.

Idiz noted that “a rare visit by Russia’s chief of the General Staff, Gen. Valery Gerasimov, to Ankara for talks on Sept. 15 with his Turkish counterpart, Hulusi Akar” reportedly included discussion of a “mechanism that would prevent them from stepping on each other’s toes in Syria.”

Candar pointed out that Erdogan seems to have concluded that an accommodation with Russia in Syria will pay major dividends for the Turkish military campaign against the YPG, including the battle for Al-Bab, which is less than 20 miles from Turkey’s border.

“Erdogan once said Syrian rebels should liberate the town with the help of the Turkish army,” Candar wrote. “Al-Bab is the last remaining Islamic State (IS) stronghold in northern Syria, and it holds strategic importance for the Kurdish People's Protection Units (YPG) in Syria, Syrian opposition groups supported by Turkey and the Syrian army supported by Russia. Erdogan implied that Turkey is committed to liberating al-Bab from IS. If that objective is achieved, the Kurdish aim of linking the Kurdish cantons along the border with Turkey will be thwarted, perhaps, once and for all.”

Akyol concluded that “it was only wise for Turkey to end the cold war with Russia, which had serious costs for Turkey’s economy, hitting both trade and tourism. Russia is also a powerful political actor — not just in the Middle East but also the Balkans — and dialogue between Ankara and Moscow will be in the interests of both capitals. On the other hand, preferring Russia as an alternative to the West would be a disastrous strategic choice. It would not only have major economic and security costs, but would also place Turkey firmly in the club of authoritarian nations.”