Is Russia pulling Turkey away from the West?

Western powers must balance Russian overtures to Turkey by reaching out to Ankara on its key concerns and being cautious with their criticism. 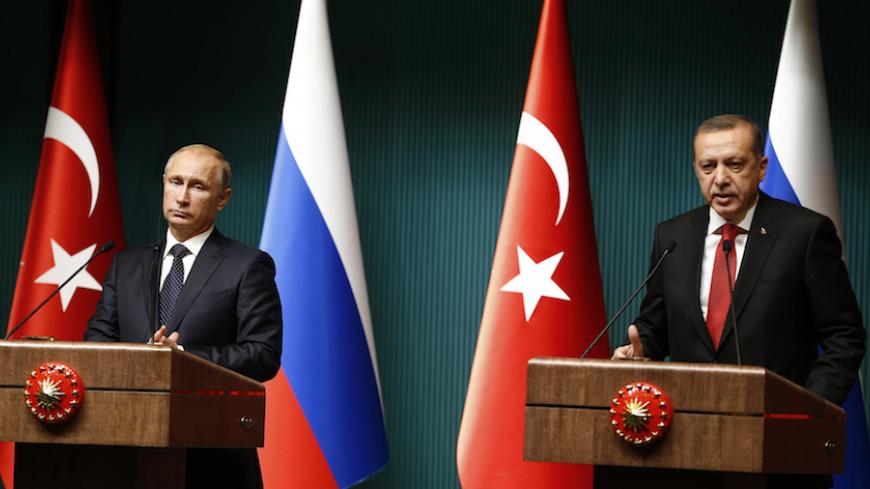 A binational meeting was held in Moscow Oct. 2, bringing together Ahmet Tunc — an adviser of Melih Gokcek, the mayor of Ankara and a strong supporter of President Recep Tayyip Erdogan — and Aleksandr Dugin, a “special representative” of President Vladimir Putin. In the meeting, Dugin made the sensational claim that he himself helped save Turkey from the military coup by informing Turkish authorities about some “unusual activity” in the military July 14, a day before the coup attempt. He also claimed that the coup plot took place “because Erdogan had begun to turn toward Russia.”

Dugin also urged his Turkish guests to reconsider the orientation of their country. “You know, they are not welcoming Turks to Europe,” he said, in reference to Turkey’s unpromising bid to join the European Union. “Yet while Europe's doors are closed to you, Russian ones are open.”

If Dugin were an ordinary Russian political scientist, these words would not mean much. But he is widely acknowledged as a major ideologue of the Putin regime. Western media outlets have dubbed him “Putin’s brain” and the “prophet of the new Russian Empire.” He is known for promoting “Eurasianism,” which seems to be “a scheme for uniting all the global enemies of liberalism under Russian leadership.”

Since the failed coup attempt, Dugin’s call to Turkey has been played up in the Russian media as well. Pro-Kremlin websites fabricated two fake news stories in September showing that the United States was behind the plot. One of them was a phony article supposedly written by a retired US ambassador depicting the Ecumenical Patriarchate in Istanbul — a theological rival to the Russian church — as a “CIA Trojan horse” that helped organize the coup. The other was another phony article supposedly written by Zbigniew Brzezinski blaming the CIA for the “grave mistake” of organizing an unsuccessful putsch in Turkey.

This Russian propaganda found strong echoes in Turkey, which is now more obsessed than ever with conspiracy theories. Both fake stories about CIA involvement in the coup made headlines in the pro-government media, apparently without any fact-checking and certainly with no corrections later on. Meanwhile, Metin Kulunk, a politician in the ruling Justice and Development Party (AKP) and a rising confidant of Erdogan, declared in mid-September that while the first aim of the July 15 scheme was to topple Erdogan, its second goal was to topple Putin. Similar arguments have been made by Erdogan’s new allies, the secular nationalists spearheaded by the Homeland Party of Dogu Perincek, whose worldview is quite close to that of Dugin’s.

A key element in this new Turko-Russian rapprochement is the common contempt for the followers of cleric Fethullah Gulen, the leader of the Islamic cult widely held responsible for the coup attempt. Erdogan and his supporters think that Western powers, out of either naivete or malice, do not comprehend the threat the Gulenists pose for Turkey. In contrast, the Russians have long designated the Gulenists as a perilous group, closing all their schools and even banning the religious movement that identifies with it. That is why Ankara and Russia, even back in 2014, have long been in full agreement on the Gulenists. Now Russians are only adding that Ankara should see “the powers behind the Gulenists,” as Dugin urged in the Moscow meeting.

The common enmity for Gulenists also gave the two countries a chance to explain away the major rift they had in November 2015, when a Russian warplane was downed by the Turkish air force on the Syrian border. This incident initiated a cold war between Ankara and Moscow, which ended only last June, when Erdogan reached out to the Russians with an apology. Soon, the pro-government media in Turkey also came up with the theory that the pilot of the Turkish jet that downed the Russian plane was a Gulenist, which may well have been the case, and acted with the sinister intention to break Turkish-Russian ties, which may well be a fantasy. But it seems to be a convenient fantasy on which both Dugin and his Turkish guests in Moscow agreed.

Now what is the significance of this new Turko-Russian rapprochement, which is significant enough to lead the AKP government to eschew its reaction to Russian military operations in Syria, including the bombing of Aleppo?

On one hand, it was only wise for Turkey to end the cold war with Russia, which had serious costs for Turkey’s economy, hitting both trade and tourism. Russia is also a powerful political actor — not just in the Middle East but also the Balkans — and dialogue between Ankara and Moscow will be in the interests of both capitals. On the other hand, preferring Russia as an alternative to the West would be a disastrous strategic choice. It would not only have major economic and security costs, but would also place Turkey firmly in the club of authoritarian nations.

Al-Monitor's sources in Ankara say there is really no intention at this point for a major break with the West, such as leaving NATO. Despite the current honeymoon, they say, Ankara has seen how Moscow reacts when it senses a crisis. It should also be noted that Numan Kurtulmus, a spokesman for the Turkish government, dismissed Dugin’s claim that Russia helped avert Turkey’s coup.

However, the Gulenist affair is quite serious, and it can keep creating resentment among the Turks against the West, in particular the United States, while deepening the ideological affinity between Turkey and Russia. Erdogan and Putin already have similar personalities and visions, and Putin — who will visit Turkey next week — was also the first world leader to call Erdogan after the coup, a gesture that “meant a lot psychologically” to Erdogan.

That is why Western capitals, especially Washington, should be aware of this Russian effort to drag Turkey away from the West. And they should balance it by reaching out to Ankara on its key concerns while offering constructive criticism on growing human rights problems rather than watching Turkey slip to the dark side.