President Recep Tayyip Erdogan’s Justice and Development Party formally met with the Russian president’s special adviser Alexander Dugin, who was busy nurturing the seeds of Turkish suspicion of the United States long before the attempted coup and is now massaging the party's relations with Russia. 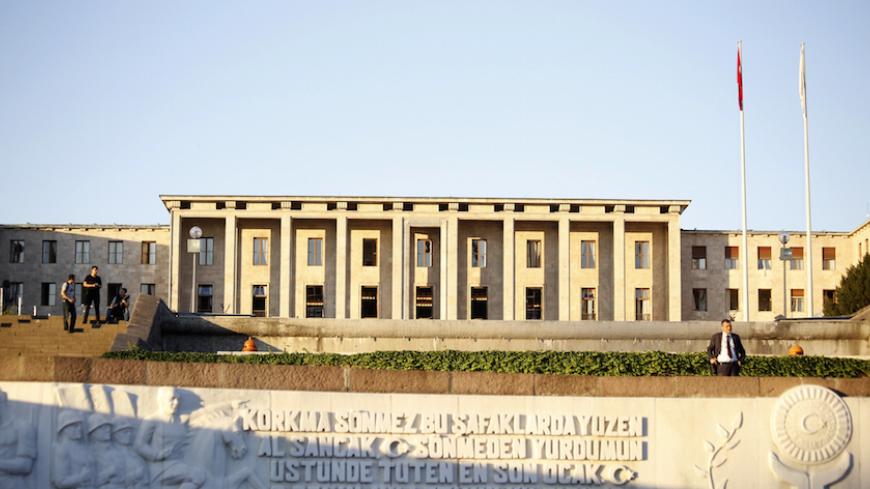 The parliament building in Ankara, Turkey, is seen July 16, 2016, after an attempted military coup. - REUTERS/Tumay Berkin

Today’s guest roster at the Turkish parliament offered an intriguing glimpse of President Recep Tayyip Erdogan’s “New Turkey.” While Western ambassadors in Ankara showed solidarity with the pro-Kurdish Peoples' Democratic Party (HDP) over the detentions of its leaders, in a nearby chamber the ruling Justice and Development Party (AKP) was hosting Russian President Vladimir Putin’s special adviser Alexander Dugin.

Posing for photographers with Turkish Prime Minister Binali Yildirim, the militantly anti-American Russian academic told reporters that Putin was “proposing a strategic alliance to Turkey and extending the hand of friendship.” Asked whether such an alliance would not conflict with Turkey’s NATO membership, the man also known as “Putin’s Rasputin” responded, “That is your decision. You will decide who stands by you, who is your friend, who is your foe.” Dugin added, “You know who stood behind the people who bombed the Turkish parliament. Definitely not Russia.”

Dugin has become the new darling of the AKP for echoing its claims that the Pennsylvania-based Muslim cleric Fethullah Gulen and the United States were behind the botched coup attempt on July 15. He was invited to testify before a parliamentary committee that is investigating the incident.

But the seeds of the love affair with Dugin were planted before July. In a June interview with his own site Katehon, Dugin had already claimed that the Americans and the Gulenists were responsible for Turkey’s downing of a Russian fighter jet over the Syrian border, all part of a plot, he insisted, to send Turkish-Russian relations into a tailspin.

It did. In the same interview, Dugin also claimed that Ahmet Davutoglu, the former prime minister who was shoved out last year, had plotted with the United States to overthrow Erdogan. The duly chastened Turkish president, he said, would now be pivoting toward Russia. The next “logical step” for Turkey would be to withdraw from NATO and to become part of a “completely different Eurasian, rather than pro-Western, Atlanticist way of development.”

Until recently, all of this might have been shrugged off as so much blather. But the doggedly anti-intellectual Dugin’s vision of a Russian-led “Eurasian Union” as an alternative to the US-led Atlanticist bloc has long resonated among ultranationalists in Turkey and especially in the military.

These “Eurasianist” officers argue that the now dismissed Ergenekon and Sledgehammer cases were not about defanging the generals but rather bolstering the influence of the Atlanticists in their midst. Having been cleared of the charges, the Eurasianists are said to have growing influence over policy including rapprochement with Moscow and recent overtures toward Syrian President Bashar al-Assad.

“Alexander Dugin appearing in these various AKP forums is the most public sign that there could be some depth to the Turkish-Russian rapprochement,” said Nate Schenkkan, project director for Nations in Transit for Freedom House, a New York-based human rights watchdog. “Dugin himself is not necessarily that influential in Moscow right now, but as a symbol he represents particular anti-Western ideology that could be attractive to some elements in Turkey that are gaining influence. His appearances in Turkey must come wıth the allowances of the Kremlin,” Schenkkan told Al-Monitor in an interview.

Erdogan and his allies may well find some of Dugin’s views attractive too. They make no secret of the fact that they see the United States' hand in the coup. Washington’s failure to unequivocally condemn the putschists in the early hours of the attempted takeover, which included plans to murder Erdogan and his family, clearly didn’t help. This may in turn explain why, as Al-Monitor’s Metin Gurcan recently noted, so many US-trained officers have been targeted in the latest wave of purges.

While Ankara is not about to heed Dugin’s calls to withdraw from NATO it obviously wants to send a clear signal that it has other options. Indeed, the view among some Westerners that Turkey’s values may no longer be compatible with those of NATO is apparently shared by Ankara as well. But then, Turkey’s adhesion to the military bloc was never solely about values. It was mainly about real estate — that is, Turkey’s strategic position at the crossroads between Europe, the Middle East and Asia. And that remains unchanged.