What the 'Russian lobby' in Ankara wants

A group of so-called Eurasianists are again whispering to Ankara that Turkey's future lies with Russia and China and have outlined a plan for severing ties with Europe. 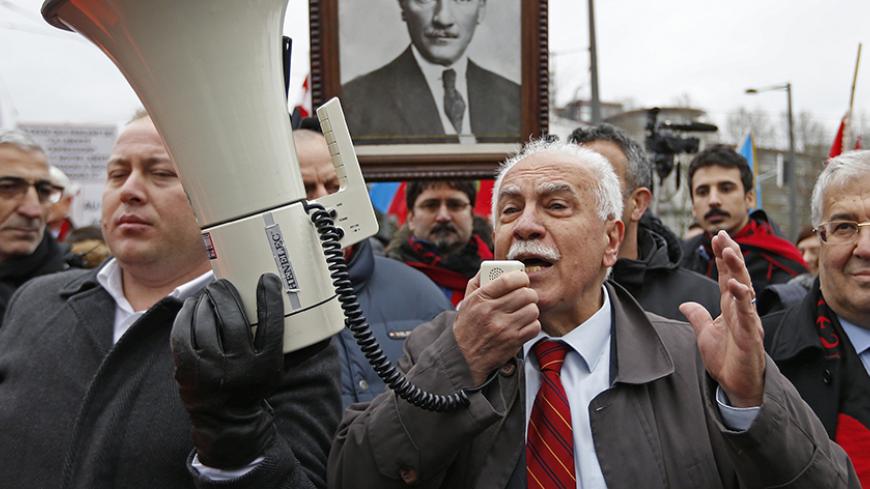 Dogu Perincek, the chairman of the Turkish Workers' Party, addresses supporters at the end of a hearing at the European Court of Human Rights in Strasbourg, Jan. 28, 2015. - REUTERS/Vincent Kessler

On Dec. 8, veteran Turkish journalist Murat Yetkin published a piece in the Hurriyet Daily News titled “A Scary Scenario in the Ankara Political Backstage.” The article, which elicited a multitude of comments and gossip, exposed a “group of people with close access to Erdogan” with an “elaborate plan” to reshape Turkey’s future. The plan involves a total detachment from European institutions to build a poorer, but more manageable Turkey. The steps would be, in Yetkin’s words, to “bring back the death penalty, to get rid of the restraints of European Union legislation when the EU cuts all relations, to let the stock exchange collapse (i.e., get rid of the pressure from big companies and foreign capital, which are not ‘from us’ anyway), to meet the military needs of NATO in a bargain with ‘our own needs’ to get rid of the excessive political pressure from the West.”

In a second piece, Yetkin identifies the group promoting this radical plan as the Eurasianists: people who believe Turkey must seek its future not in the West, but in Eurasia, in particular alongside Russia and China. They view the reinstitution of the death penalty, an idea with which President Recep Tayyip Erdogan has lately been playing, as the pivotal move for cutting all ties with the European Union and setting sail for the Shanghai Pact.

Eurasianism is not, of course, a new concept in Turkish politics. It was popularized in the early 2000s when a group of secular nationalists with ties to hawkish elements in the military launched its opposition to the EU accession process, envisioning a rapprochement with Russia and China instead. A key figure in the movement was Dogu Perincek, known in Turkey as a beacon of Maoism who was arrested in 2008 for being a member of the Ergenekon, a quasi-imaginary cabal that allegedly planned a military coup against Erdogan’s Justice and Development Party (AKP). Today, however, with the tables in Turkey having been completely overturned, the anti-Western forces that were once sworn Erdogan enemies are now among his best friends.

That is why Perincek, who spent six years in jail during the notorious Ergenekon trial, and his small Homeland Party, now constitute a key element in the current Eurasianist movement, or the “Russian lobby,” as some call it. Al-Monitor sources in Ankara confirmed that Perincek and his team were influential in restoring Turkish-Russian ties after the crisis triggered by Turkey's downing of a Russian warplane last year, even establishing an indirect dialogue with Syrian President Bashar al-Assad's regime.

The failed coup in July further empowered the Eurasianists. The reserved reactions to the coup in the West were widely perceived in Turkey as evidence that although the plot had been executed by Gulenists, it had been planned by the alleged Mastermind, a shadowy Western cabal relentlessly conspiring against Turkey. Of note, Russian propaganda helped strengthen this perception, with fake news about CIA involvement in the coup that the pro-Erdogan media eagerly spread.

The all-secular Perincek group is a small ring, however, and does not fully fit into the religious worldview of the ruling AKP. That is why the Eurasianists within the AKP matter more. According to Al-Monitor’s sources in Ankara, there are two main components in the AKP faction: one of businessmen with significant investments in Russia and whose concerns are therefore only pragmatic, and the other a more ideological clique of “certain advisers to President Erdogan, some key figures in the bureaucracy, and some staunchly pro-Erdogan pundits.” They all genuinely believe that there is a huge Western conspiracy against Turkey and that Ankara should ally itself with Putin and other anti-Western dictators.

For these Eurasianists, however, there is now a big silver lining in the West: Donald Trump. They have great expectations of the next president of the United States, among them the extradition of the cleric and alleged head coup plotter Fethullah Gulen and a halt to US support for Kurdish fighters in Syria. Whether they will be disappointed of course remains to be seen.

Where does Erdogan, the ultimate decider, stand on this issue? Is he seriously considering the Eurasianists' ambitions and leading Turkey toward a major fallout with the West?

It seems more likely that the ever-pragmatic Erdogan just wants to keep all his options on the table. He certainly feels “betrayed” by the United States and the EU and in solidarity with the “leaders that the West calls dictators.” Yet, what this indicates is that he wants the West to change its behavior toward him, which is what he is hoping for in Trump.

“He is implicitly telling the West, ‘We have other options,’” a senior member in the pro-government media told Al-Monitor, “and he will see what he gets out of this.” According to another political observer with access to Erdogan’s inner circle, “His ultimate goal is to maximize and prolong [his stay in] power, and he can ally himself with either the West or Russia according to the circumstances.”

In other words, Turkey’s almost two-centuries-old “Western orientation” seems more uncertain today than ever, and there is nothing certain about the future. It depends on how Turkey’s domestic scene unfolds and also on how Western powers respond. In any case, those who hope to see Turkish democracy survive should try to secure Ankara’s links to the West, in particular Europe. Otherwise, if the Russian lobby in Ankara gets its way, Turkey’s transformation into another Russia might be accomplished.