When Dogu Perincek, the leader of the ultra-left and ultranationalist Patriotic Party, announces a "united front" with Turkey's ruling AKP, one should see why. 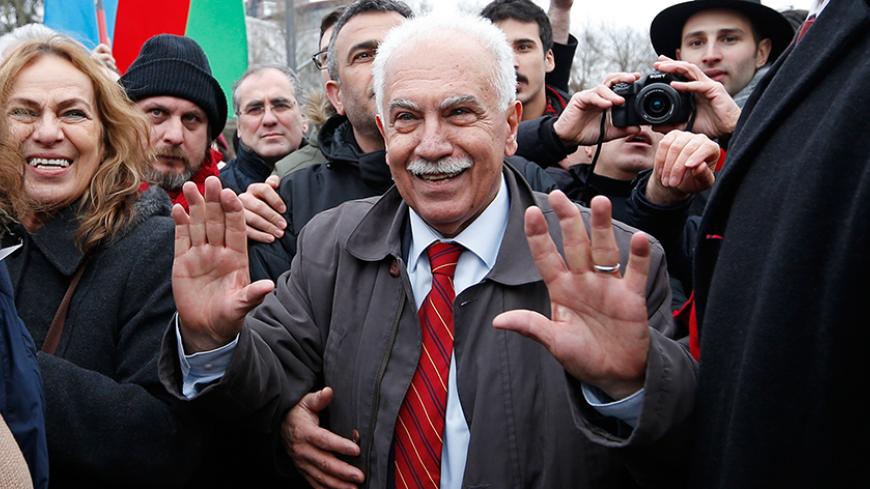 Dogu Perincek is surrounded by supporters at the end of a hearing at the European Court of Human Rights in Strasbourg, France, Jan. 28, 2015. - REUTERS/Vincent Kessler

Turkey's ruling Justice and Development Party (AKP), which has been in power now for more than 13 years, has garnered for itself a wide array of opponents along with a wide array of supporters. A new name in the latter group, however, is quite unusual and surprising even by Turkish standards, for he used to be a fierce enemy of the AKP for a very long time. He is Dogu Perincek, the leader of the ultra-left and ultranationalist Patriotic Party.

Perincek, who may be largely unknown to the outside world, has always been a marginal yet famous figure in Turkish politics. He made a name for himself in the '70s as the leader of the Turkish "Maoist" movement, which was at odds with not just the anti-communist right but also the "Leninist" faction of the left. In the early '80s, he seemed to support the Kurdistan Workers Party (PKK) out of Marxist solidarity. Gradually, however, Perincek and his political movement, along with their provocative periodical, Aydinlik, tilted toward Kemalism, emphasizing the nationalist, secularist and "anti-imperialist" aspect of Turkey's founding ideology.

One manifestation of Perincek's anti-imperialism was his eagerness to present the "Armenian Genocide" as an "imperialist lie" aimed at defaming and weakening Turkey. He was able to carry this argument to Switzerland in 2007, where he was sentenced by a court for "genocide denial." Yet in 2015, the European Court of Human Rights delivered a landmark decision protecting Perincek's freedom of speech, despite the legal effort by Amal Clooney, whose presence as attorney of Armenia added to the media attraction of the case.

Back in Turkey, Perincek had legal troubles for something else. In 2008, he was arrested with the charge of being a key member of Ergenekon, an alleged criminal cabal of radical officers and their civilian allies supposedly cooking up a military coup against the AKP government. Part of the "evidence" was his 2007 book, "Hacli Irtica" ("Crusader Reactionaryism") in which he depicted the "reactionaries" in Turkey — a leftist term for Islamists — as puppets of the "Crusader West." One of the headlines in the book read, "The AKP government is illegitimate, and it will be overthrown."

Perincek remained jailed for the next six years. In August 2013, an Istanbul criminal court — widely believed to be under the influence of the Gulen movement, which was then still an AKP ally — gave him an aggravated life sentence. Only four months later, however, the long-time AKP-Gulen movement alliance crumbled and turned to all-out political war. And only three months later, in March 2014, Perincek and other convicts of the Ergenekon case were set free. Most of them were also convinced that the real "Crusader Reactionaryism" was the Gulen movement, and the AKP was now their ally.

That is how Perincek began getting close to the AKP universe — the party, the media, the trolls and the GONGOs (government-oriented nongovernmental organizations). He began giving long interviews to the pro-AKP press and being hosted by the most hawkish pro-Erdogan pundits. On Jan. 20, he openly declared, "With the religious conservatives, we have formed a common patriotic front." By "we," he was referring to "scientific socialists," a euphemism for Marxists.

However, there is also an ideological basis for the latter-day alliance of the AKP and the secular "anti-imperialists" such as Perincek and the like-minded. Known as "ulusalcilik," a term that roughly stands for "secular nationalism," this was an ideological trend of the 2000s that opposed the United Nations plan for the reunification of Cyprus, the European Union accession process and a series of liberal reforms called "the openings." The AKP, which was then in an alliance with liberals, had spearheaded all those reforms, while blaming the pre-AKP era for authoritarianism at home and paranoia about the world. In an important 2010 speech, Erdogan — then prime minister — said, "Until 7½ years ago [when the AKP came to power], Turkey was defined as a country 'surrounded by seas from three sides, and by enemies from four sides.' Everybody was seen as an enemy. Every country was presumed to have dirty plans about Turkey, and invisible walls were erected around our country. If the government had any failure, the responsibility was found always in the outside world."

This was the reformist Erdogan who claimed to save Turkey from its taboos and fears and look at the world with more trust and confidence. However, that Erdogan whom I used to admire and support has gradually disappeared. Since the Gezi Park protests of June 2013, which he perceived as an international conspiracy against him, he adopted the very narrative he once criticized: Turkey is surrounded by enemies, within and without, and all troubles stem from these diabolic forces, not from any possible wrongdoing of the government.

This bitterly nationalist narrative, which is churned by the pro-Erdogan media every single day, typically defines the West as the conspiratorial center that wants to halt "Turkey's rise" with numerous plots. That is why it is no surprise that ultranationalists such as Perincek now find themselves very close to their former enemy, the AKP, because it is the AKP that has inherited all of their ideological narrative about building a "fully independent" Turkey that will not care about, for example, what the EU says about the state of its freedoms.

To their credit, people such as Perincek have been principled and persistent about their ideas in this drama. It is the AKP that has taken an amazing turn.

There is one caveat to add to this story. The anti-Western narrative of the AKP continued in full speed until an unexpected crisis: the cold war with Moscow, which began with the downing of a Russian warplane on the Syrian border by Turkish jets last November. Since then, pro-AKP propaganda has gone relatively easy on the West and discovered Putin's Russia as the new evil empire. Whether this is a temporary adjustment or a more strategic one remains to be seen.