Two very different groups are vying to fill all the personnel holes Turkey's purge punched into its military and intelligence agencies. 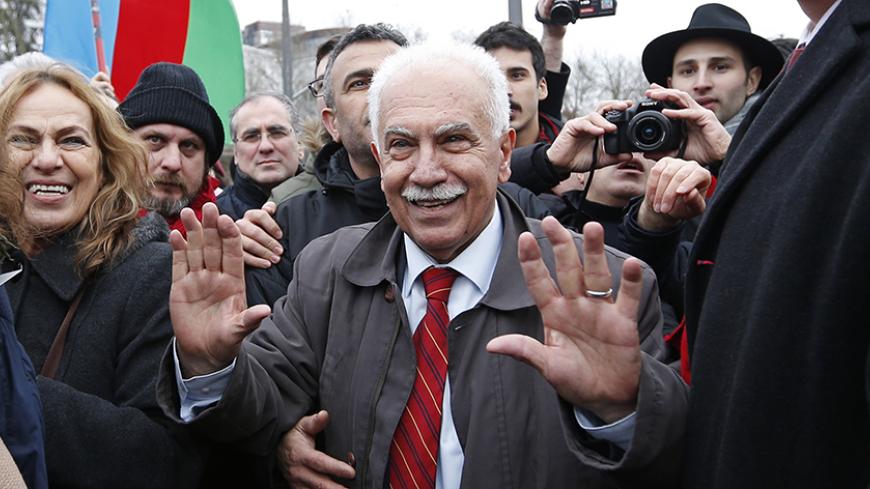 Dogu Perincek, the chairman of the Turkish Workers Party, is surrounded by supporters at the end of a hearing at the European Court of Human Rights in Strasbourg, France, Jan. 28, 2015. Later that year, the party changed its name to the Patriotic, or Homeland, Party. - REUTERS/Vincent Kessler

Following the July 15 coup attempt, 93,000 civil servants were suspended from their duties in many of Turkey's public institutions; investigations are ongoing for 40,000 of them. The key question now is who will fill those vacancies, especially in the military and intelligence bureaucracies.

One hard reality is that the ruling Justice and Development Party (AKP), despite its 14 years in power, has not developed a senior bureaucratic team that deals with security and intelligence affairs. Hence, a power struggle was inevitable at the senior echelons of the National Intelligence Service (MIT), the Gendarmerie Command, the Ministry of Defense and the Turkish Armed Forces (TSK), where two distinct schools of thought or cliques are competing to fill the vacancies.

One of the schools of thought is that of the Homeland Party, also known as the Patriotic Party, which received only 120,000 votes (0.25%) out of 50 million votes cast in the Nov. 1 elections under the leadership of Dogu Perincek. It is popularly called the Perincek Group.

This group — renowned for its staunchly secular, isolationist, ultranationalist, socialist, anti-US, anti-West, pro-Russian and Euroasianist characteristics — has no strong standing as a popular political party, but its influence in the upper echelons of the state’s security and intelligence services is steadily growing. High-level military police and intelligence personnel affiliated with this group were the Fethullah Gulen movement's most prominent targets for replacement between 2006 and 2014, when the Gulenists had the AKP's cooperation in ending military tutelage.

Those Gulenists who replaced Perincek Group personnel are themselves being eliminated. Now, amazingly, the Perincek Group has become the entity that President Recep Tayyip Erdogan is relying on most to purge the state of Gulenists and in the struggle against the Kurdistan Workers Party (PKK). Erdogan has endowed the group with ample powers.

The basic philosophy of the group is that for Turkey to overcome the tough conditions of the present, it has to revert to the first years of the republic and adhere to Kemalism, independence, secularism, statism and nationalism.

Perincek, who is seen by some in Ankara as even more influential than Prime Minister Binali Yildirim, attracted much attention on a TV talk show Aug. 16 when he said, “The AKP with its current cadres cannot govern Turkey. This is why President Erdogan is trusting our presence in critical posts of the state.”

Perincek’s deputy, retired Col. Hasan Atilla Ugur, recently made headlines when he declared, citing his sources in security and intelligence units, "[A] second coup attempt is very close. [Gulen's group] is after a new coup together with the PKK and foreign powers.” (Ugur referred to the so-called Fethullah Gulen Terrorist Organization, or FETO, a term Ankara uses for Gulen followers.)

According to the Perincek Group, which has many retired generals and senior judges among its members, the threat of the Gulen movement in the state and in civil society has not passed. That’s why it is essential to preserve both the personal charisma of Erdogan and the founding tenets of the Turkish Republic. But this group is uncompromising with the conservatives who form the AKP’s base. Perincek, who spent more than five years in prison — for, of all things, allegedly plotting a coup against Erdogan's government — upon his release declared, “We will eradicate all cults.” He is perceived to be the "secret hand" behind the current purges, especially in the state security and intelligence bureaucracies. Many believe the Perincek Group played a key role in the renewal of the state of emergency that was set to expire Oct. 19.

The other clique vying to secure a strong position in state security/intelligence is the "Virtuousness" bloc made up of conservative-nationalists of the AKP base. This group, which has the support of religious devotees such as the Menzil (Range) community of the Nakhshibendi persuasion and the Suleymanist community, is seriously concerned about the increasing influence of the Perincek Group in critical state posts and its determining role in the purges. Ahmet Tasgetiren, the daily Star’s pro-AKP writer, said in a recent article, “The greatest risk that must be taken into account nowadays is the elimination of conservative cadres in the judiciary, armed forces and universities by branding them as 'FETO affiliates' and thus leaving the field free for Dogu Perincek’s expansion."

Tasgetiren added, “What they want to do is to have the AKP eradicate its social base and to fill the state organs with 100% anti-AKP people who might easily constitute the infrastructure for another attempt to create a parallel state."

Ali Karahasanoglu of the pro-AKP daily Akit, in a recent article titled "We can’t say FETO is gone, here comes Perincek," said the Perincek Group is expanding the purge of Gulenists from sensitive state posts to also systematically target Islamists.

Kemal Ozturk of the pro-government Yeni Safak, in his article “Are Islamists being pushed out?” said a new breed claiming to be AKP devotees — they call Erdogan "our chief" — have totally lost their bearings and have been putting Gulenists and Islamists in the same basket. According to Ozturk, dismissals are being used to oust Islamists-conservatives from critical official posts.

Today, the unrelenting competition is between Perincek and conservative blocs in the Ministry of Defense, whose upper management levels are to become 70% civilian, and also the Gendarmerie Command, whose upper levels will also be turned over to civilians. A most critical question in Ankara corridors is who will be appointed to fill the 400 key vacated MIT jobs — the Perincek Group or conservative bloc sympathizers? There are already signs that a contest is also developing in the Gulhane Military Medical Academy and military hospitals that have been taken away from the military and put under the civilian medical system, where the Menzil group and Suleymanists have the upper hand.

At the end of the day, Erdogan will make the final decision about restructuring the critical state security and intelligence bodies. One must not forget that although the conservative-nationalist bloc is basically the AKP base, it was manipulated by the Gulenists and still constitutes a major security gap for Erdogan. The Perincek Group has never been penetrated by Gulenists and is ever-determined to combat them. But this strong drive to cleanse the state of Gulenists has caused serious problems in distinguishing between the guilty and innocent, which even Erdogan had to admit.

Although it lacks a popular base, the Perincek Group serves two purposes for Erdogan: The group is the only political entity that has considerable influence over the secularists, and Erdogan is able to use that influence to exert some degree of control over the secular opposition. In addition, by relying on the group, Erdogan is able to keep motivation and alertness alive in the state bureaucracy and the civil society against a possible new coup attempt.

But to entirely surrender the security-intelligence bureaucracies to this group — which has robust secular, socialist, anti-Islam and ultranationalist ideologies — could end up rooting out conservative-nationalist AKP elites and people close to the AKP from the bureaucracy. How Erdogan will manage this power struggle in the security-intelligence structure will determine the transformation of the state bureaucracy and the AKP's institutional structure. Erdogan feels a vital need for the Perincek Group in his struggle with Gulenists and for his personal security. But if the Perincek Group, benefiting from Erdogan’s dependence on it, exaggerates the purges in the bureaucracy, that could threaten Erdogan’s longtime close circles and even his personal future.

Now we have to wait and see which course Erdogan chooses in the bureaucratic struggle.