Erdogan not backing down on Turkish role in Mosul 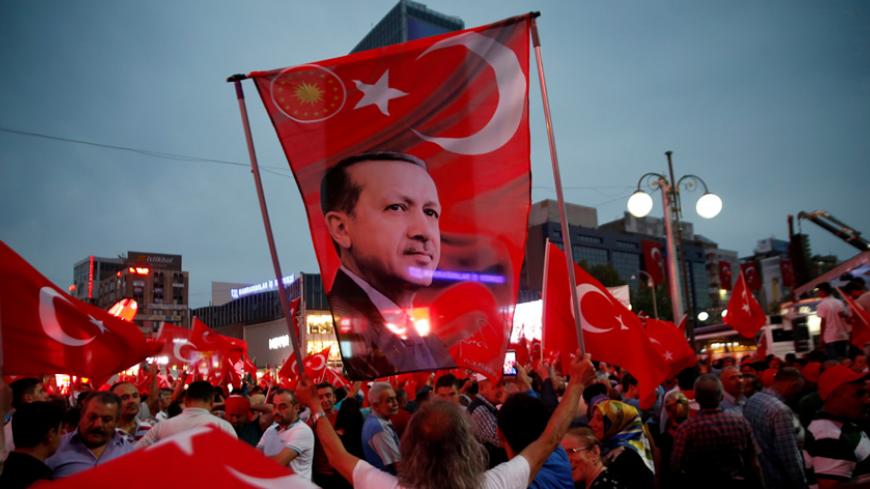 Erdogan says Abadi "not at my level"

Iraqi Turkmen groups have escalated their calls for an independent province in the Tal Afar district west of Mosul, Wassim Bassem reports, in advance of the widely anticipated military campaign to remove Islamic State (IS) forces from the city.

The demand by some Turkmen groups coincides with similar calls by Christians and Yazidis for their own autonomous regions in Ninevah province.

Bassem reports, “All of these projects are based on religious or ethnic division, whether among Turkmens, Kurds, Arabs, Sunnis or Shiites. Some see these proposals as the solution to the sectarian, religious and ethnic diversity problems that have caused so much killing and displacement of minorities since the Islamic State (IS) took over the areas in June 2014. But others fear the proposals would further divide the country into regional fiefdoms, fending off peace and causing new conflicts for power and influence.”

Turkish President Recep Tayyip Erdogan put a sectarian and nationalist edge on this demand when he said Oct. 2, “After liberating Mosul from [IS], only Sunni Arabs, Turkmens and Sunni Kurds should stay there.” His position has led to a crisis in relations with Baghdad, and further aggravated Turkey’s ties with both the United States and Iran on the eve of what may be one of the defining battles of the campaign against IS.

Semih Idiz explains that the Turkish claim to Mosul has both nationalist and Islamist origins. “The reason why nationalist Turks are overly sensitive about Mosul is that the 'Turkish National Pact,' as defined by those prosecuting the war of liberation during 1919-1922, included Mosul within Turkey’s borders. They believe Turkey was cheated out of Mosul by Britain at the time and have cast the United States in Britain’s role today. Islamist Turks, on the other hand, consider Mosul to be a Sunni city and see a plot aimed at ridding it of its Sunni population in favor of Shiites. In his address to parliament recently, Erdogan referred to an effort to alter Mosul’s demographic composition and said Turkey would do its utmost to prevent this.”

Erdogan has formally rejected Iraqi Prime Minister Haider al-Abadi’s warning for Turkish forces to stay out of the Mosul campaign. On Oct. 11, at a meeting of Islamic military leaders, the Turkish president took a condescending tone toward Abadi, saying that “the Turkish army has not lost so much prestige as to take its orders from you,” and that “you are not my interlocutor, you are not at my level, your quality is not at my level,” as Amberin Zaman reports.

Erdogan claims that Turkish troops are present in Bashiqa, Iraq, by “invitation” to train Kurdish and other forces to battle IS. Zaman explains that this “is only half the story. Iraq was indeed aware that Turkey had sent several dozen forces to Bashiqa as trainers after IS stormed into Mosul in 2014. It is also true that Iraq’s recently sacked defense minister, Khaled al-Obeidi, had visited the Turkish camp. That, however, was before Turkey sent in hundreds of elite troops and tanks in December 2015 without seeking Baghdad’s approval. The Iraqi Kurds had appealed to Washington for help at the time, claiming the Turks had told them that they were coming, but that Erbil didn’t want them to. In any case, the Kurds would have been unable to stop them, and now there is little Baghdad can do to physically eject them.”

The Iraqi parliament has labeled the Turkish troops as occupiers and has called for their withdrawal. The United States has backed Abadi in this confrontation, arguing that it is the Iraqi government’s decision on which troops are involved in the Mosul operation. Pro-government media in Turkey have attacked the US position as signaling a tilt toward Iran, and another sign of deteriorating US-Turkish relations, Idiz writes.

Hillary Clinton’s remarks that as president she would “consider arming the Kurds; they have been our best partners in Syria, as well as Iraq," spurred a rebuke from Erdogan, who characterized her as a “political novice.” He added, “This is a very unfortunate statement. I regard this as political inexperience.”

Cengiz Candar speculates that the Turkish president “most probably” prefers a Donald Trump presidency, recalling “it was Erdogan who inaugurated the high-rise Trump Tower shopping mall in Istanbul, with Turkish media mogul Aydin Dogan in 2012.”

Metin Gurcan chronicles a power struggle “at the senior echelons of the National Intelligence Service (MIT), the Gendarmerie Command, the Ministry of Defense and the Turkish Armed Forces (TSK), where two distinct schools of thought or cliques are competing to fill the vacancies.”

One school is the Perincek Group, headed by Dogu Pericek, which is linked to the minor Homeland Party and “renowned for its staunchly secular, isolationist, ultranationalist, socialist, anti-US, anti-West, pro-Russian and Euroasianist characteristics. … High-level military police and intelligence personnel affiliated with this group were the Fethullah Gulen movement's most prominent targets for replacement between 2006 and 2014, when the Gulenists had the AKP's [Justice and Development Party's] cooperation in ending military tutelage. The basic philosophy of the group is that for Turkey to overcome the tough conditions of the present, it has to revert to the first years of the republic and adhere to Kemalism, independence, secularism, statism and nationalism.”

The other clique is the Virtuousness bloc "made up of conservative-nationalists of the AKP base. This group, which has the support of religious devotees such as the Menzil (Range) community of the Nakhshibendi persuasion and the Suleymanist community, is seriously concerned about the increasing influence of the Perincek Group in critical state posts and its determining role in the purges."

Gurcan says pro-AKP columnist Ahmet Tasgetiren of the daily Star recently wrote, "The greatest risk that must be taken into account nowadays is the elimination of conservative cadres in the judiciary, armed forces and universities by branding them as 'FETO affiliates' and thus leaving the field free for Dogu Perincek’s expansion."

Gurcan points out that “although the conservative-nationalist bloc is basically the AKP base, it was manipulated by the Gulenists and still constitutes a major security gap for Erdogan. The Perincek Group has never been penetrated by Gulenists and is ever-determined to combat them. But this strong drive to cleanse the state of Gulenists has caused serious problems in distinguishing between the guilty and innocent, which even Erdogan had to admit. Although it lacks a popular base, the Perincek Group serves two purposes for Erdogan: The group is the only political entity that has considerable influence over the secularists, and Erdogan is able to use that influence to exert some degree of control over the secular opposition. In addition, by relying on the group, Erdogan is able to keep motivation and alertness alive in the state bureaucracy and the civil society against a possible new coup attempt.”

Gurcan concludes, however, that “if the Perincek Group, benefiting from Erdogan’s dependence on it, exaggerates the purges in the bureaucracy, that could threaten Erdogan’s longtime close circles and even his personal future.”