Iraq worries that Turkey, emboldened by the progress of its Operation Euphrates Shield intervention in northern Syria, might be planning an "Operation Tigris Shield" for Mosul. 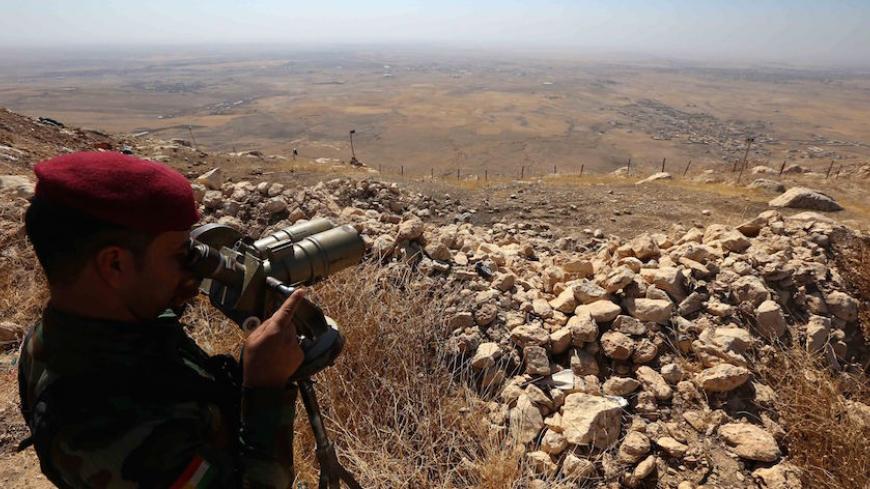 An Iraqi Kurdish peshmerga fighter looks through binoculars on the top of Mount Zardak, about 25 kilometers (15 miles) east of Mosul, Oct. 6, 2016. - GETTY/Safin Hamed

Turkey has been officially uninvited — in no uncertain terms — to the liberation of Mosul, Iraq.

When rumors began piling up recently that Turkey — after launching Operation Euphrates Shield in Syria — also has plans to intervene on the Iraqi front with Operation Tigris Shield, diplomatic channels between Ankara and Baghdad caught fire.

Baghdad was already unhappy with Turkey, believing Ankara is more interested in the post-Islamic State (IS) future of Mosul rather than helping to liberate it. Baghdad was also concerned about Turkey training Sunni-dominated Al-Hashd al-Watani forces at Bashiqa training camp 25 kilometers (15 miles) from Mosul.

So when Turkey's parliament decided Oct. 1 to extend for a year its military operations in Iraq and Syria, the Iraqi parliament responded with a blunt, unfriendly warning.

The warning called for summoning the Turkish ambassador, branding Turkish forces in Iraq as occupiers, prosecuting those responsible and denouncing Turkish President Recep Tayyip Erdogan’s pronouncements. It also called for reviewing trade and economic relations with Turkey and initiating immediate action with the United Nations to expel Turkish troops.

Turkey's Foreign Ministry responded in similarly harsh language: “We denounce the decision of the Iraqi parliament. We strongly condemn the ugly accusations directed to our president.”

Tension between Ankara and Baghdad escalated after Iraqi Prime Minister Haider al-Abadi warned that the presence of Turkish soldiers in Iraq could lead to a regional war.

Turkey’s Deputy Prime Minister Numan Kurtulmus contributed to the squabble. “Where was the Iraqi government when [IS] occupied Mosul in one day?” he asked, referring to the takeover in June 2014.

Many people wondered what had prompted the Iraqi parliament's bad-tempered action. A political adviser who was in the Iraqi parliament's lobby when the issue was being discussed told Al-Monitor, “The interview of Erdogan with Rotana TV was discussed a lot here. Shiite parties and minority representatives were upset. There were calls for expulsion of the Turkish ambassador. Erdogan’s words that Mosul should be left to Sunnis annoyed the Turkmens. There is concern here that after Syria, Turkey might [focus on] Iraq. Turkey seems to be determined — at least Iraqis think so."

The Turkish public heard a censored version of the statement Erdogan made on Dubai-based Rotana TV. Turkey’s state-controlled media Anadolu Agency quoted Erdogan as saying, “Mosul belongs to the people of Mosul, and Tal Afar belongs to the people of Tal Afar. Nobody else has the right to come and enter these places. After liberating Mosul from [IS], only Sunni Arabs, Turkmens and Sunni Kurds should stay there.”

But according to Arabic and English translations, interviewer Jamal Khashoggi asked, “Do you think Mosul can be liberated without the intervention of Turkey and Saudi Arabia?”

Erdogan replied, “I want to make it clear that Turkey, Saudi Arabia, Qatar and the Western coalition will not allow sectarian domination. … But there is a major question: Who will then control the city? Of course, Sunni Arabs, Sunni Turkmens and Sunni Kurds. "

"Turkey and Saudi Arabia especially must cooperate to prevent them from entering. When we set up the camp at Bashiqa and our soldiers were training peshmerga, Baghdad's government was not uncomfortable with Turkey. We will not abandon our brethren who requested our support. We will not allow Mosul to be dominated by another terror group after [IS]. I believe Iran, too, will be careful about Mosul. Mosul belongs to people of Mosul and Tal Afar to the people of Tal Afar. Nobody else should enter these areas,” he said.

Naturally, that statement did not sit well with Shiite Turkmens, Shiite Arabs, Shabaks, Kakais, Yazidis and Christians who live in Mosul. Even the Sunnis in the PMU were upset. It was reported on all Iraqi channels. Erdogan’s stand on Mosul disappointed the Turkmens who saw Turkey as a guaranteeing power for them and embarrassed the Turkmens regarding other Iraqi sects.

A Turkmen representative who requested anonymity told Al-Monitor, “When Turkey makes a mistake, the bill is made out to Turkmens. This kind of utterance becomes a problem for us because here, people see Turkmens as one and the same with Turkey. It is best if Erdogan goes ahead and does what he says he will do instead of firing off such controversial statements."

He continued, "Look, nowadays there is a debate going on about allotting one [Iraqi] ministerial post to Turkmens. Now, because of the tension with Turkey, that seat will probably be given to someone who has no true connection with the Turkmens. For some time now, Turkey has been telling Turkmens to work together with Kurds. Because of this new policy, Turkey kept mum when the Kurdistan administration settled 600,000 Kurds in Kirkuk and revamped its demographic structure. When [IS] was expelling Shiite Turkmens from Mosul and Tal Afar, Turkey did not react. This is how Turkey is losing the Turkmens. Sure, the Turkmens still love Turkey, but they also see what the AKP [Justice and Development Party] rule is doing.”

In 2015, when Turkey sent 1,000 soldiers and 20 tanks to the Bashiqa base, Ankara said that was done with the knowledge of the Iraqi government. When Baghdad reacted by saying that the military force went beyond training needs and should be withdrawn, Ankara responded with the justification that they were there at the invitation Atheel al-Nujaifi, the former governor of Ninevah province. Then, Turkey said it will participate in the Mosul operation upon the invitation of Kurdistan Regional Government President Massoud Barzani.

Al-Monitor spoke with Turhan Mufti, the chairman of the Nationalist Turkmen Peoples’ Party, about Turkey’s involvement. Mufti said the party doesn't want Turkey to intervene in Mosul and added, “What is important is for Iraq to solve its own problems. This is not something you can do with invitations sent by the former governor of Ninevah or Barzani, but [only] with the invitation of the Iraqi government. How can anyone else invite a foreign force to the country? … Some say, ‘If there are US soldiers, why not Turks?’ This means nothing. It is the Iraqi government that will decide which country can send its soldiers to Iraq.”

Mufti was also critical of Erdogan’s warning to Hashid Shaabi not to enter Mosul. He said, “Hashid Shaabi is not made up of exclusively Shiites. Mosul’s own Hashid Shaabi will of course take part. These are people who had fled from Mosul and Tal Afar. They are people of Mosul. Also, Iraq must be accepted as a whole. Why shouldn’t an Iraqi from Basra not fight at Mosul? We are in an all-out war against IS. Why can’t [Turkey] understand this? Nobody can impose conditions on who can fight or not.”

Mufti is among those who think the Iraqi parliament's decision was influenced by allegations that Turkey is supporting IS and that Ankara was responsible for the fall of Mosul. Ankara may dismiss the reaction of Shiite Arabs by saying they are influenced by Iran, but can Ankara ignore the reactions of Turkmens who love Turkey?

A Mosul Turkmen who was part of an unofficial diplomatic effort to improve relations between Turkey and Iraq in the first years of AKP rule in the early 2000s now feels devastated. He answered Al-Monitor’s questions with his own:

“Why did Turkey wait for two years doing nothing against [IS]? Now it says [the Shiite] Hashid Shaabi should not enter Mosul. Fine, then why didn’t you let [the Sunni] Hashd al-Watani, which you claimed to have trained, fight? What were you waiting for? Others marched from Baghdad to Mosul, fighting their way and paying the price for it. Now you are telling them, ‘Stop.’ Who is going to listen to you? You say only Sunni Arabs, Sunni Turkmens and Sunni Kurds will remain in Mosul. Why are you talking only of Sunnis? There are at least 12,000 Shiite Turkmens in the Iraqi army, police and Hashid [forces] fighting IS. Why didn’t you help Turkmens until today? You gripe about Iran, but Iran was on board to help from day one. Why weren't you? Even Ersad Salih, the chairman of the Iraqi Turkmen Front, openly said, ‘Turkey is not coming for us.’ This is what Turkmens feel.”

Many in Iraq believe Turkey intends to split the country, even though Erdogan keeps saying Turkey supports the territorial integrity of Iraq. Two days before calling for an end to Turkey’s military presence in Iraq, the Iraqi parliament rejected the request of some Sunni parties to create new federal zones and declared that Mosul’s administrative boundaries will not change. Of course, this example is just another omen of what is in store for Mosul after its liberation.