Turkey criticizes the Mosul operation but is doing everything possible to be part of it. 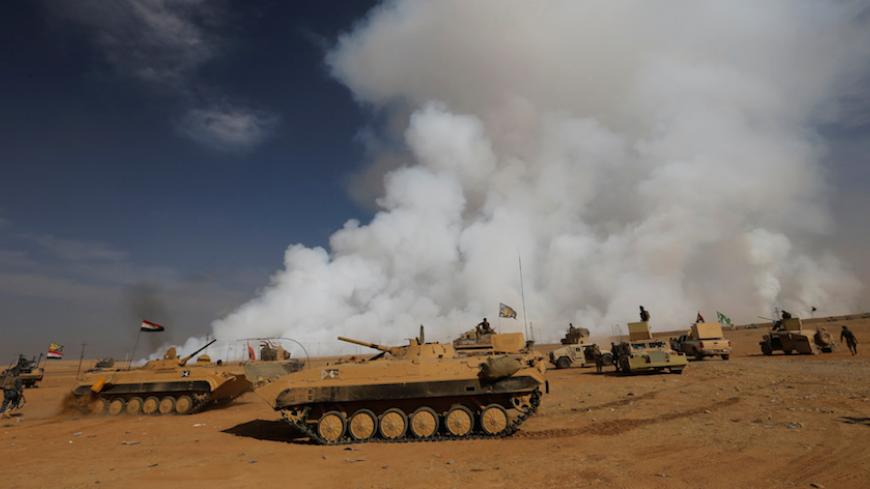 The Iraqi army gathers after the liberation of a village from Islamic State militants, south of Mosul, during an operation to attack IS militants in Mosul, Iraq, Oct. 21, 2016. - REUTERS/Thaier Al-Sudan

Turkey’s foreign policy is subject to bizarre cycles, and nowhere is that clearer than in the following example:

In March 2011, when then Prime Minister Recep Tayyip Erdogan traveled to Baghdad, he was met with an avalanche of cheers and affection from supporters of Shiite leader Muqtada al-Sadr. Thousands of greeters lining his route carried placards welcoming him. Five years later, there is not the slightest trace of that affection. On Oct. 18, Sadr’s supporters demonstrated in front of the Turkish Embassy in Baghdad, shouting “Occupier, get out!”

As the dialogue between Ankara and Baghdad turned into angry threats, Erdogan warned, “We are determined to be in the Mosul operation. If coalition forces don’t want Turkey, then our B plan will enter into force. If not that, we have plan C.”

What plans B and C are is open to speculation. There are many who see Erdogan’s threat as a bluff he hopes will portray him as a strong leader, but there are also some who think Turkey is liable to seek a new adventure similar to its outing in Syria.

Plans B and C suggest Turkey is using tactics against the coalition to find a place in the Mosul operation or to create a buffer zone along the border, as was done in Syria. Should there be a massive refugee wave, Turkey could use that to legitimize active intervention. Turkey is working on emergency plans to cope with such a refugee influx or Islamic State (IS) infiltration attempts. There is talk of a 10-kilometer-wide (6-mile-wide) buffer zone in Iraq, similar to the corridor from Jarablus to al-Rai in Syria.

It will be difficult to establish a buffer zone without the consent of Erbil, Baghdad, Iran and the United States. Erdogan keeps saying, “We did it in Syria; we will do it also in Iraq,” but he forgets that the United States and Russia weren't against Turkey entering Syria.

US Defense Secretary Ash Carter met Oct. 21 with Turkish officials in Ankara and said Turkey should play a role in removing IS from Mosul, but Iraq will make the final decision.

That's quite a bit less supportive than a meeting that supposedly took place Oct. 18 in Washington, when the US reportedly gave Ankara the green light to participate in air operations in Iraq. Prime Minister Binali Yildirim announced an agreement between Turkish Chief of General Staff Hulusi Akar and US Joint Chiefs of Staff Chairman Gen. Joseph Dunford. He said the agreement stipulates Turkish planes will be directed by the Mosul Command Center in Kuwait and used to bomb IS targets where there are no risks of civilian casualties. Coalition planes based at Turkey's Incirlik Air Base are to be used for these operations, according to the announcement, and Turkey’s Diyarbakir air base is to be designated as the communications, search and rescue center of the air operations.

Yildirim said Turkey would join the coalition air operations if there is a need and request for it. Although it is not yet clear if the coalition will assign missions to Turkish jets, the reported green light from Washington is enough for Ankara to brag and say, “We pushed for it and got it.”

This agreement does not cover the Turkish soldiers at Bashiqa camp, although the main issue was about Turkey being in the field. Ankara wants to demonstrate its involvement by using its four howitzers at Bashiqa; but for that, the coalition has to provide the coordinates. So far it hasn’t, and the guns are silent.

Meanwhile, Turkey is pressing hard diplomatically to keep its soldiers at Bashiqa. On Oct. 18, a delegation headed by Umit Yalcin, the undersecretary of the Foreign Affairs Ministry, was in Baghdad to negotiate. On the table once again were Turkey’s warnings against Shiite militias entering Mosul, fear of possible massacres by Sunni Turkmens at Tal Afar and expansion of the Kurdistan Workers Party’s (PKK) presence in Sinjar. According to Al Jazeera, Ankara’s formula to retain the Turkish forces at Bashiqa is to place that camp within the coalition framework. Foreign Minister Mevlut Cavusoglu said the talks in Baghdad were positive and negotiations will continue with an Iraqi delegation expected in Ankara. But the Iraqi Foreign Ministry announced no progress was made in the talks.

Turkey has been saying its ground forces have been invited to Iraq by the Kurdistan Regional Government (KRG) and Turkmens. But no such request came from either camp. KRG leader Massoud Barzani knows that to consolidate his control of the disputed areas, he needs Baghdad's partnership. That is why he is saying, probably much to Ankara’s disappointment, “There must be a way to reconcile Ankara and Baghdad about the presence of Turkish soldiers. We don’t think a force should participate in the operation without Baghdad's consent." He is simply not playing Ankara’s game. In return for his crucial contribution to the operation, Barzani wants to control the area east of the Tigris River that divides the city and to make his de facto rule of Kirkuk a permanent one.

Turkmens are already upset and desperate. Erdogan, by declaring that only Sunnis should have a role in the future of Mosul, actually delivered the final blow to fractured ties between Turkey and the mostly Shiite Turkmens.

Contradictions in the Mosul issue don’t end there. Ankara, while pressing with all its might to participate in that operation, is also claiming that the operation is actually against Turkey, according to sources who spoke to the daily Milliyet.

Relations are becoming more toxic as tensions mount, with a true risk of clashes. At the moment, the Bashiqa camp — with about 400 Turkish soldiers — is not secure because of Iraqi forces deployed around it. A source in Mosul told Al-Monitor that some heavy Iraqi guns are pointing at the camp.

This tension will also have implications for the economy. In some Iraqi provinces, there are calls for Turkish companies to be expelled. The Turkish Foreign Ministry issued a warning about travel to Iraq. Nevertheless, Erdogan seems intent on punishing Iraq with his rhetoric. While doing that he is citing border arguments of 100 years ago. He has repeatedly referred to the "National Pact" of post-independence days that showed western Thrace, Mosul, Kirkuk and Erbil within Turkey’s borders. On Oct. 18, Erdogan said, “If we comprehend the National Pact, then we will understand our responsibilities for Iraq and Syria. Today we have responsibility for Mosul. If we are saying we will be both in the field and at the table, there is a reason for it. … What you call Baghdad today commands a totally Shiite army. Are we going to talk to those people? They are going to deliver Mosul to Hashd al-Shaabi [Popular Mobilization Units]. If they really want to come, we will teach them. We will be here, in the field and at the table. Talks at the table are going on and preparations continue for the field.”

Ankara feels that allowing a Shiite belt to extend to Mosul and Kirkuk would force Turkey to strategically withdraw.

Ankara also thinks the defense of Turkmens is one of Turkey’s primary interests in Iraq. But Turkey had lost ground on these parameters before the Mosul operation because of its policies of the past eight years. The status in Kirkuk has changed. Turkey designated Sunni Arabs as instruments of political patronage. Whatever Ankara wanted to play as a card did not succeed. Sentiments of the Justice and Development Party rule aren’t enough anymore to define the parameters of its classic foreign policy.

Turkey's approach to Mosul may have given the impression that it has scored some minor gains, but they are not enough to reverse what has been long lost.

Ankara’s objections to the possible outcome of a Mosul operation without Turkey’s involvement and without addressing its concerns are the following: