How Ankara plans to repeat Syria success in Iraq

Ankara seems to have contingency plans for every situation to make its presence felt in Mosul. 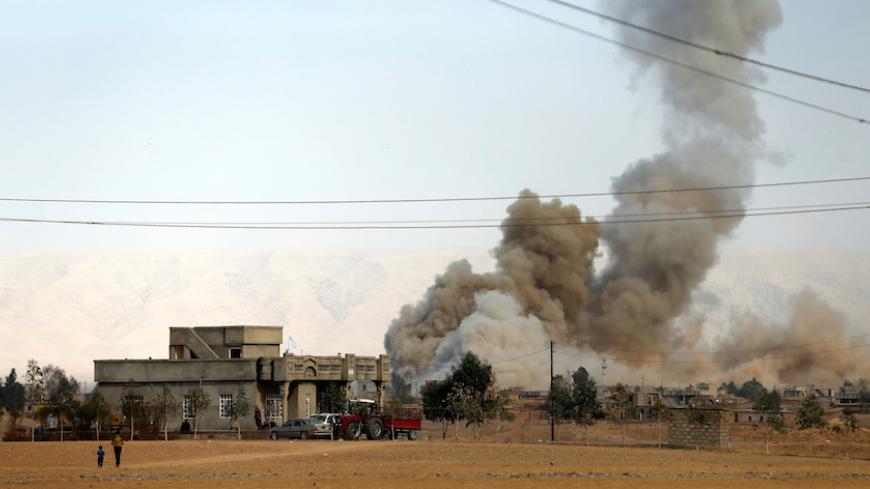 Smoke rises from a bomb attack south of Mosul, during an operation to attack Islamic State militants in Mosul, Iraq, Oct. 20, 2016. - REUTERS/Thaier Al-Sudani

What is Ankara’s strategic thinking about the battle for Mosul in Iraq, even as Turkey unleashes airstrikes on US-backed Kurds in Syria? One undeniable fact: Ankara feverishly wants to be in Mosul when the cards in Iraq are reshuffled.

Turkish President Recep Tayyip Erdogan, responding to Iraqi Prime Minister Haidar al-Abadi’s ultimatum that Turkish soldiers can’t enter Mosul, said Oct. 17, “How can you keep me out? I have a 350-kilometer [200-mile] border there. Those who have nothing to do with the place are entering Mosul. Why? Because Baghdad is supposed to have invited them. … We will be there for the operation and at the table.”

The next day, newspapers close to Erdogan's Justice and Development Party (AKP) government reported his words in banner headlines. Erdogan has thus made Mosul an important domestic political issue in Turkey.

The first crisis between Ankara and Baghdad erupted in December over Turkey’s decision to reinforce its presence at Bashiqa, Iraq, near Mosul. In my Dec. 7 column, I wrote that Ankara’s goal is to set up an autonomous Sunni power center at Mosul that will incorporate the Kurdistan Regional Government (KRG) under Massoud Barzani and the Turkmens.

The United States' position on the crisis between Ankara and Baghdad is clear-cut. Meanwhile, Ankara wants to replicate Operation Euphrates Shield that enabled it to return to the playing field in Syria, only this time, in Iraq as "Tigris Shield." But the situation is radically different. The coalition has decided that Mosul is to be liberated exclusively by anti-Islamic State (IS) forces under US leadership and Iraqi forces.

The US military wants to keep intact the ground force it has been able to patch together in more than a year and doesn’t want an Ankara-Baghdad crisis affecting it. Pentagon spokesman Peter Cook said the matter of the Turkish army participating in the Mosul operation is an issue to be handled between Iraq and Turkey.

Looking at the battlefield deployment, the strategic goal of the Mosul operation appears to be to push IS eastward, where there is no coalition ground force, and to steer IS toward Syria on the Tal Afar-Sinjar axis. Of course, during this channeled movement IS convoys will be under heavy coalition air attacks.

To better understand Turkey’s position on Mosul, we need to look at Turkey’s military presence in Iraq. Since the early 2000s, Turkey has been keeping a tank battalion with two companies at the former Bamerni air base south of Metina. It also has a commando battalion at Kanimasi close to the border, two tank companies for force protection at Bashiqa, plus a commando battalion and six special forces teams tasked with training and equipping missions. Turkey also maintains special forces liaison offices in 10 cities of the KRG, notably at Erbil, Dahuk and Zakho. All these military assets cannot possibly join an operation against Mosul. At the moment, the Turkish army’s participation would be limited to four 155 mm howitzers with a 40-kilometer (25-mile) range based at Bashiqa.

What is the situation today?

The Bashiqa camp — which accommodates 500-600 Turkish soldiers, howitzers, Stinger anti-aircraft missiles, tanks and other armored vehicles — is now at its highest alert level. Sources in Ankara contacted by Al-Monitor want the Bashiqa camp to play the key role in the assault against Mosul from the north. These sources noted that since the beginning of the Mosul operation, no one has asked to use any Turkish base for the air attacks, no Turkish air elements have been involved and there has been no artillery fire from Bashiqa. It is clear that Ankara is considerably annoyed by not even taking part in the air operations against Mosul. What Ankara wants most is active participation of the Ninevah Guards, which comprise about 3,000 Sunni Arab militias, Turkmens and Kurds under the leadership of Atheel al-Nujaifi, the former governor of Ninevah province.

Ankara, by having the Ninevah Guards, which it sees as a balancing force of the Mosul operation in the offensive from the north, wants Baghdad and Tehran to recognize Turkey’s role.

Ankara now thinks Turkish proposals are being taken into consideration. Sources say the participation of the Ninevah Guards and the Kurdish peshmerga in the grand Mosul offensive has been accepted. Half of the 3,000-strong Ninevah Guards will be involved in the thrust to the center of Mosul; the other half will be kept in reserve.

US interlocutors were also informed of a key Turkey reservation about the Mosul operation. Turkey rejects any participation of the Kurdistan Workers Party (PKK), either as part of the peshmerga or with Yazidi Sinjar Resistance Units, which is linked to the PKK. Sources say they have been assured by the United States that the PKK will not be involved in the operation in any manner, whether under its own banner or under the cover of another organization.

The political knot of the operation is what kind of governance there will be in Mosul after the operation. Every power in the region has a different goal: Barzani's KRG wants to control north of Mosul; the PKK dreams of a canton at Sinjar; Nujaifi wants to recover his lost leadership of Mosul; and Shiite Arabs see control of Mosul as part of their regional power struggle that will enable them to dominate the city with US support.

Ankara’s red lines are summarized as: no mass refugee wave, no entry of Shiite militias into Mosul’s center or oppression of the people, and not allowing the PKK to sneak in under the banner of the Sinjar Resistance Units.

If Ankara believes these lines are crossed, it can turn to its plan B and have Barzani and the Sunni Arab tribes of Mosul declare, "The balance of power is changing. We therefore invite Turkey to Mosul," thus enabling Turkey to assume a larger role in the field, backed by the legitimacy of such an invitation. On Oct. 16, some Sunni Arab tribes that met in Erbil did issue a declaration inviting Turkey to Mosul, but this declaration went largely unnoticed.

Ankara feels its Operation Euphrates Shield is going well in northern Syria and has restored Turkey’s status as a major player there. So Turkey's plan C in Iraq is to copy-paste that operation into northern Mosul. If Turkey's plans A and B don’t work out, Ankara plans to set up a 10-kilometer buffer zone just like it has done in Syria.

Foreign Ministry Undersecretary Umit Yalin led a Turkish diplomatic delegation to Baghdad on Oct. 17 to discuss the status of Turkish forces at Bashiqa and the ongoing Mosul operation. Sources in Ankara said the real mission of the delegation was to explain in detail Ankara's plan C. Ankara wants Baghdad and Washington to understand that plan C is serious and feasible.

First, some basic facts: Over the past year, IS has been facing a shortage of financial resources, a dwindling number of foreign militant fighters, the loss of 40% of the territory it held in Iraq and 20% in Syria, diminishing local popular support and expansion of the anti-IS coalition, which is increasingly becoming a force on the ground.

What, therefore, are the options for IS under these deteriorating circumstances?

The first option is a phased, temporary withdrawal with the intention of returning. If IS still maintains its central planning capacity, it can leave the city center in phases without sustaining major losses by staging extreme measures against the coalition force — for example, by using chemical weapons and executing its prisoners en masse. The intention here will not be to entirely abandon Mosul, but to set the stage for a second assault against the city.

The second IS option would be to resist until the end, which means risking annihilation in a protracted urban war. This scenario could be triggered if Iraq's army enters the city with a show of force that turns the people against them. The Sunni Arabs remember how they had problems returning to Salahuddin and Anbar after IS was expelled because of arbitrary and oppressive actions by Shiite militias. Despite all soothing and reassuring messages from the Baghdad government, most Sunnis don’t believe them. Some irresponsible, bombastic comments by Shiite militia chieftains do not help.

Now we are seeing that IS is not as apocalyptic as we were led to believe. However, as an organized force, it can be expected to maintain its cohesion, resist with minimal losses and go underground in Mosul. If the clashes in Mosul assume a sectarian character, local residents who do not usually support IS may decide to support it against Shiite militias, thus strengthening the IS capacity to engage in long-term urban warfare.

To understand the seriousness of the situation, one has to look at military activities at Silopi, the Turkish town closest to Mosul. Turkey is currently deploying batteries of 155 mm howitzers there to cover a 40-kilometer target zone.

Now, if we start reading reports of Ankara shifting armored and mechanized brigades to Silopi, that will be a signal to us that Ankara has given up on plan B and is moving on to plan C, which provides for a buffer zone in Iraq — in other words, Operation Tigris Shield.