Turkey sticks its neck out again, this time in Iraq

Ankara’s unusually loud public acknowledgement of sending reinforcement soldiers into Iraq shows Turkey hopes to establish its own territory there. 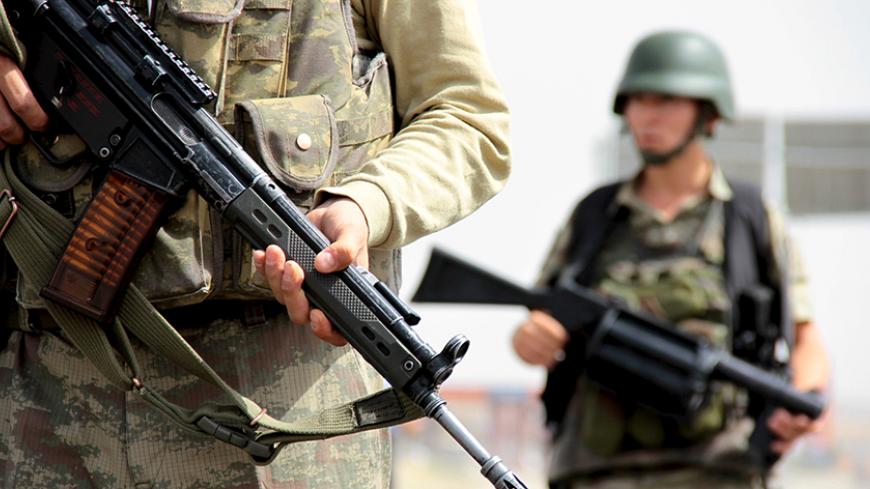 Turkish soldiers stand guard at a checkpoint on the main road between Mardin and Cizre near the southeastern town of Midyat, Turkey, Sept. 9, 2015. - REUTERS/Sertac Kayar

In its second incredibly controversial move in as many weeks, Turkey drew Baghdad's wrath over the weekend by dispatching uninvited reinforcement troops to Iraq. While Turkey said the move was merely routine, Baghdad called it a “violation of sovereignty” and told Ankara it had 48 hours to get those troops out.

Turkey has since said it will send no more troops but has not withdrawn any soldiers.

Ankara deployed the troops to the Bashiqa area of Iraq, just north of Mosul, the night of Dec. 4 — less than two weeks after Turkey downed a Russian warplane Nov. 24 near the Turkish-Syrian border.

About 80 Turkish special forces personnel have been giving military training for more than a year to Kurdish peshmerga, Turkmen and Sunni Arabs. Prime Minister Ahmet Davutoglu described the arrival of new troops as “a routine rotation and reinforcement.” However, the elements of the new Turkish troops and reports circulating in corridors of Ankara that the dispatch will continue suggest that this was more than a routine movement.

The reinforcement detachment sent is a 400-strong battalion from the Siirt Third Commando Brigade supported by 25 M-60 A3 tanks that will bring the number of Turkish military personnel at Bashiqa camp to about 600. Of course, nobody can claim that this is a sufficient combat force for offensive action. But with this increase — finalized with the blessing of the Kurdistan Regional Government (KRG) during the November visit of then-Foreign Minister Feridun Sinirlioglu to Erbil — Turkey has actually transformed the Bashiqa temporary training camp into an apparently permanent military base.

At present, Turkey maintains an armored battalion at Bamami in northern Iraq, elements of this tank battalion at Amadiya and Suri, and a commando battalion at Kanimasi near the Turkish border to prevent border crossings of the Kurdistan Workers Party (PKK). Turkey also has about 130 special forces personnel based at Erbil, Zakho, Dahuk, Batufa, Sulaimaniyah and Amadiya who operate as liaison teams. With the latest reinforcements, the number of uniformed Turkish personnel in Iraq has reached about 3,000, making Turkey's the third-largest force of military foreign soldiers in Iraq, after Iran and the United States.

At Bashiqa and Erbil, the Kurdish peshmerga, Turkmen and Sunni Arabs are given three weeks of training in urban combat, including dealing with improvised explosive devices; handling heavy machine guns, mortars, and TOW and MILAN portable anti-tank guided missiles; forward observation techniques; and first aid. These civilians are then sent home and called back as needed.

The rumors in Ankara say Turkey will continue sending troops to Iraq, particularly north of Mosul. The first batch of reinforcements is likely to include howitzers with a range of 25 miles, ground surveillance radars and improved armored personnel carriers.

Reports of Turkey's new troops drew the strongest reaction from Baghdad. The Iraqi Foreign Ministry summoned the Turkish ambassador in Baghdad and demanded Turkey’s immediate ending of "this occupation."

"The Iraqi authorities call on Turkey to … immediately withdraw from Iraqi territory," said a statement from the office of Prime Minister Haider al-Abadi.

"We have confirmation that Turkish forces, numbering about one armored regiment with a number of tanks and artillery, entered Iraqi territory … allegedly to train Iraqi groups, without a request or authorization from Iraqi federal authorities.”

The deployment "is considered a serious violation of Iraqi sovereignty," it added.

Abadi said that unless Turkey withdraws its troops within 48 hours, Iraq will use all options, including reporting to the UN Security Council.

Turkish Foreign Minister Mevlut Cavusoglu said Turkish troops had gone to Iraq on the request of the Iraqi defense minister to train their soldiers to fight the Islamic State (IS) and noted that the United States, Germany and France were doing the same.

Apparently surprised by the Iraqi reactions, Davutoglu sent a letter to his Iraqi counterpart to explain the presence and activities of Turkish troops in Bashiqa. Davutoglu said no more Turkish reinforcements will be sent until the Iraqi government is fully satisfied with the arrangement. He did not say the troops would be withdrawn.

Washington announced it knew about the Turkish reinforcements, but said it would be inaccurate to classify the move as an activity of the anti-IS coalition and it should not affect efforts to combat IS. For the time being, Tehran and Moscow have been keeping quiet.

The fact that Turkey did not cancel or delay its reinforcements despite the regional tensions that followed its downing of the Russian military plane shows the priority Ankara attached to that action.

Based on Al-Monitor’s contacts with security sources in Ankara, Turkey apparently has three goals with this reinforcement activity:

Do these developments indicate Ankara is abandoning its policy that has until now backed Iraq’s territorial integrity? That is not yet clear, but it is not far-fetched to claim that Ankara is increasingly of the opinion that there is no central authority in Iraq. Ankara could believe the PKK and Shiites are getting the upper hand unchallenged.

Ankara — which realizes each player in Syria and Iraq is setting up its own “boutique power base” — feels a best-case scenario for Turkey will be:

Will these scenarios work? What can’t be denied is that all the players who have expectations in Iraq and Syria are focusing on post-IS power sharing instead of fighting IS now. It will be wise to keep an eye on the foreign policy and field moves of the United States, Russia and Turkey, which will set the tone.