Even Turkmens are unhappy with Turkey’s moves in Mosul, and Ankara may have made a serious misjudgment. 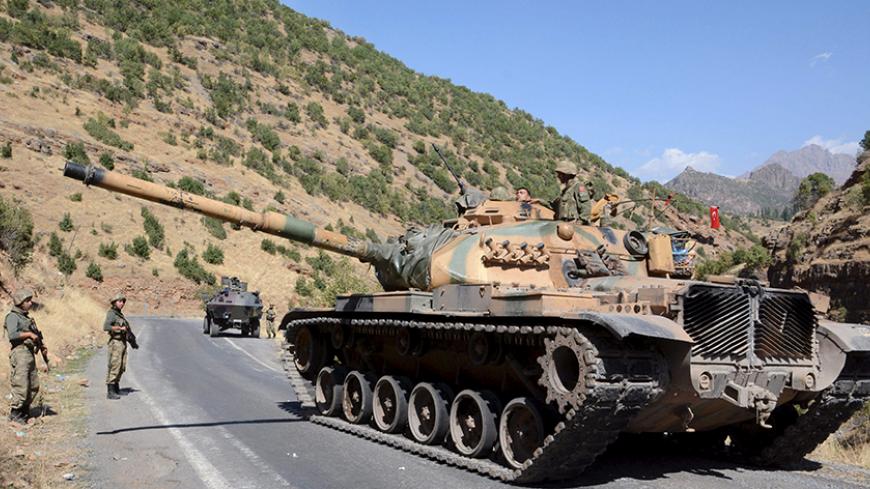 Turkish soldiers in a tank and an armored vehicle patrol the road to the town of Beytussebab in southeastern Sirnak province, Turkey, Sept. 28, 2015. - REUTERS

After the tension that followed Turkey shooting down a Russian jet, Turkey is now caught up in a controversy with its other critical neighbor, Iraq. When the Turkish Armed Forces (TSK) sent soldiers accompanied by tanks to the camp at Bashiqa, 20 kilometers (12 miles) from Mosul, Iraqi Prime Minister Haider al-Abadi issued an ultimatum for Turkish troops to leave within 48 hours. He said Iraq will consider all options, including turning to the UN Security Council, should Turkey fail to withdraw. Iraqi Defense Minister Khaled al-Obeidi said that about 1,000 soldiers had been sent without informing Baghdad, too many for a training mission.

Turkish Prime Minister Ahmet Davutoglu responded with a letter to Abadi saying Turkey will suspend sending troops to Bashiqa until the Iraqi government’s concerns are addressed. But the letter did not yield results. Iraqi Foreign Minister Ibrahim al-Jaafari said that the time was running out and repeated the warning that Iraq would turn to the UN if Turkey doesn’t withdraw its troops. Then the TSK announced that it had halted the dispatch of a new 350-strong unit waiting at the border, but 600 troops at Bashiqa now will not be withdrawn.

The crisis was brought about by a lack of coordination. The Iraqi government requires that all military assistance against the Islamic State (IS) go through Baghdad in coordination with the Ministry of Defense. The United States, which has defense and cooperation agreements with Iraq, is extremely careful to respect the Iraqi conditions.

There are several reasons Turkey tends to commit careless mistakes in Iraq.

A governmental vacuum in northern Iraq since 1991 has allowed Turkey to boost its influence in the region. The TSK's soldiers gained operational experience while deployed against the Kurdistan Workers Party (PKK). The Turkish military presence in various locations, including Sulaimaniyah and Erbil, was politically linked to Turkey’s wish to protect Turkmens in the region.

After the legal establishment of the Kurdistan Regional Government, Turkey’s military presence continued. Turkey claims it is at Bashiqa with the approval of Baghdad to train Hashd al Watani set up by former Ninevah Gov. Atheel al-Nujaifi and the peshmerga forces, but a deployment of 1,000 soldiers and 25 tanks gives the impression that the training camp has been turned into an operational base.

What could Turkey be hoping to achieve by reinforcements it wanted to send?

Following the downing of its plane, Russia has been targeting Turkey’s Syria plans, mainly by restricting the TSK’s operational capacity in the area between Aleppo and Turkey currently controlled by the opposition. In response, Ankara wants to have a presence in Mosul so as not to be totally sidelined in the Middle East game. Turkey’s focus on Mosul aims to deter the PKK forces deployed in the area alongside the peshmerga to liberate the Yazidi town of Sinjar from IS.

In Ankara, there are increasing sentiments in the ruling party to restore the National Pact borders. The neo-Ottomans of the party want to be among forces liberating Mosul and thus restore their lost influence in the region. Ankara also wants to guarantee the future of oil agreements made with the Kurdish administration.

Ankara is also making a strategic choice. Turkey opposes the entry into Mosul of the Hashd al-Shaabi forces, which are on Baghdad's payroll and support Sunni-dominated Hashd al Watani, but backs its narrative with careless and baseless claims. For example, Ankara says, “Hashd al-Shaabi is fully Shiite and guided by Iran.” Those who say this are forgetting that the Turkmens Turkey is supposed to be protecting have fought alongside Hashd al-Shaabi. True, Hashd al-Shaabi was set up by a fatwa from Grand Ayatollah Ali al-Sistani, but it became a legal force attached to the Prime Ministry. Hashd al Shabi that is currently the most effective field element against IS in Iraq includes Sunni units. Those who mutter "Shiites must not enter Mosul" forget that 65% of the population of Iraq is Shiite. Iran’s influence is also exaggerated.

Turkmens who spoke to Al-Monitor were critical of Turkey and Nujaifi because of his hostility to the central government that tolerated IS. Turkey has been working with the wrong people in Mosul since 2003, they said, and Mosul cannot be liberated with Nujaifi and the militia he is leading.

They also said Turkmens in the ranks of Hashd al-Shaabi have acquired experience in fighting IS for a year and a half, and ignoring this resource will only serve IS.

KRG President Massoud Barzani’s administration, although not delighted with the Turkish military presence, is keeping quiet for the sake of commercial relations with Turkey. The KRG has no one else to turn to if its relations sour with Baghdad.

At this juncture, Arab opinions are important. Among Iraqi political circles, Turkey’s policies are held responsible for the fall of Mosul and empowerment of IS. Their popular slogan can be best summarized as, “Mosul will be liberated by all Iraqis. No other power, including Turkey, has the right to express reservations about Hashd al-Shaabi.”

Two Iraqi sources explained to Al-Monitor on condition of anonymity why they can’t depend on Nujaifi, saying, “Iraqi government ordered those trained at Bashiqa to participate in the Bayci operations. Nujaifi, though he didn’t have more than 2,000 fighters, wanted additional funds from the government, claiming he has 8,000-9,000 fighters. The payment was then stopped.”

Many people ask whether the latest Turkish move has anything to do with joining an operation to liberate Mosul.

According to Aydin Selcen, Turkey’s former consul general at Erbil, “You can’t say that 600 soldiers with the new reinforcements will have a bearing on the military picture on the ground. It will be more fitting to see this as a political and public relations move.”

Selcen told Al-Monitor, “This shows that the Bashiqa base is being transformed from temporary to permanent. This carries a political message to all parties, like Baghdad, Tehran, Moscow, Washington, Erbil and Qandil. But it doesn’t mean a display of force to liberate Mosul from IS and that Turkey will join such an operation in the near term.”

Selcen added, “After IS captured Mosul — or better to say took it over — the first thing it did was to erase the Iraq-Syria border to consolidate two war fronts. Reviewing what has been done in Bashiqa, it is obvious that training was given on the request of ex-Gov. Nujaifi with the consent of the Iraqi Kurdistan Regional Government that controls the region and with the knowledge of the US.”

Selcen warned that Ankara had taken a risky step military and politically, asking, “Is it worth it? Did we really calculate the consequences of what we are doing in these circumstances?”

Selcen concluded by summarizing what he saw as Ankara’s misguided calculations about Mosul: “Once we used to warn Massoud Barzani to get his act together and not to dream of ruling Kirkuk. Today Kirkuk oil is flowing to Turkey’s Ceyhan in the pipeline of the KRG. Now we are telling [Democratic Union Party] leader Salih Muslim not to lose his head. What if global forces tomorrow tell Ankara, ‘Don’t lose your head. Nobody will allow you to take over Aleppo and Mosul.’ Who is saying that Arabs of Mosul and Aleppo are waiting for Turks with open arms? How quickly we forgot the suicide attack against our Baghdad embassy on Oct. 14, 2003, and our special forces team that was brutally murdered in Mosul on Dec. 17, 2004.”

Turkey’s military presence in Iraq has suddenly become a source of dispute because of tensions with Baghdad. This can only complicate the Mosul issue, while increasing the possibility of hostilities against Turkish forces there.