Why is Turkey stirring the Iraqi cauldron?

The wisdom and real motives of Turkey dispatching troops to northern Iraq is a topic of hot debate. 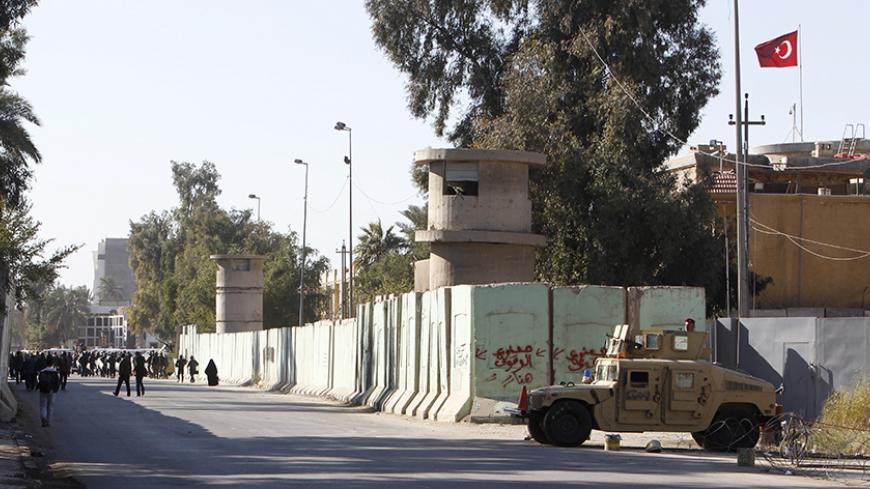 Surrounded by unfriendly neighbors as a result of serious policy blunders, Turkey now finds itself facing a fresh crisis with Iraq, with which it has had less than warm relations in recent years. The cause of the latest fracas is the Dec. 3 deployment of 150 Turkish troops and 25 tanks to Bashiqa, a town north of Mosul, that Turkey argues are for training Kurdish peshmerga and Arab fighters to confront the Islamic State (IS).

The move has resulted in much speculation about Ankara’s true motives. Russia, with support from Baghdad, wasted little time capitalizing on the fresh crisis, calling for Turkish military actions in Syria and Iraq to be discussed at the UN Security Council. Moscow’s announcement followed Iraq’s threat to take the matter to the Security Council if Turkish troops were not withdrawn in 48 hours.

A Dec. 3 statement by Iraqi Prime Minister al-Haider Abadi’s office said, “Turkish troops numbering around one regiment armored with tanks and artillery entered Iraqi territory, and specifically the province of Ninevah … without the request or authorization from the Iraqi federal authorities.” It called the action a “serious breach of Iraqi sovereignty.”

Turkish Prime Minister Ahmet Davutoglu responded by saying Turkish troops have been in Bashiqa since March 2015 with the blessing of the central government, regional authorities and the Kurdistan Regional Government (KRG). Government sources in Ankara said the deployment had been agreed to in December 2014 during a Davutoglu visit to Baghdad for talks with Abadi. In a letter to Abadi after the latest crisis, Davutoglu said that Turkey respects the sovereignty and territorial integrity of Iraq better than others and that it would not send more troops to Bashiqa “until the sensitivities of the Iraqi government are placated.” Government officials in Ankara also said that the troops sent to Bashiqa, with the knowledge of the central government, are part of a routine rotation.

The Turkish media reports claim there is currently a 600-strong special forces unit in Bashiqa, along with the 25 tanks. Reports also cite officials saying that if the need arises, the number of troops could be increased to 1,200. Foreign Minister Mevlut Cavusoglu has said the troops already there would stay. “It is our duty to provide security for our soldiers providing training there,” Cavusoglu said in a TV interview.

It is not clear, however, if this is a simple rotation of troops or a beefing up of Turkey’s military presence for other purposes. Military officials have told the press that the troops are in Iraq to protect the training camp against attacks by IS or the Kurdistan Workers Party (PKK).

Iraqi Defense Minister Khaled al-Obeidi was quoted by Reuters as saying that Bagdad had not been informed about the latest deployment, adding that the number of troops sent was too big if the objective is to train anti-IS elements. He repeated Baghdad’s call for the troops to be withdrawn immediately.

Reports indicate that diplomats are working, with US encouragement, to overcome the problem, but there was no indication at the time of writing that progress had been made. A further complication for Turkey is that it is not getting the support it expected from the United States. Brett McGurk, Washington’s special envoy for the US-led anti-IS coalition, said on Twitter, “The U.S. does not support military deployments inside Iraq absent the consent of the Iraqi government.” He added, for good measure, “This includes deployment of U.S. military personnel.” Pentagon spokesman Jeff Davis reiterated this position.

Turkey has received support from only two sources. One is KRG President Massoud Barzani, who is expected for talks in Ankara this week. The semiofficial Anatolia News Agency quoted him Dec. 8 as saying that Turkish troop were in Iraq by agreement. “According to our knowledge Turkey and Iraq agreed beforehand for the deployment of Turkish soldiers near Mosul. An alliance was established to train and support volunteer soldiers that will liberate Mosul,” Barzani said. He added that in his view, “This affair had been blown out of proportion.”

Barzani was referring to the long-awaited liberation of Mosul, which fell to IS in June 2014. Turkey and the KRG have close links despite Ankara’s attempts to prevent Syrian Kurds from gaining any autonomy.

The independent political and economic ties Turkey has developed with the KRG, especially in the energy field, have angered Baghdad, and Washington sees them as a threat to Iraq’s already fragile unity.

Turkey has been training peshmerga for some time now, and analysts say the positive results were seen in the recent liberation of Sinjar from IS.

Atheel al-Nujaifi, former governor of Ninevah province, where Mosul is located, and who has close ties with Turkey, also supports Ankara in the deployment of Turkish troops. Anatolia News Agency reported that Nujaifi, the first to call for the establishment of the Bashiqa base after the fall of Mosul, said the troops had been deployed at Abadi's request.

“If Iraq’s leaders can’t face up to Iranian influence, and act as if they don’t know about it, that’s something else,” Nujaifi was quoted as saying. His remarks reflect the intense speculation unleashed by Ankara’s move. Many argue Iraq is acting under pressure from Tehran. Some analysts also believe the motive behind the Turkish move is to counter the influence of the Iranian-supported Shiites, who make up the majority of the population in Iraq.

Nujaifi, himself a Sunni, formed the “al-Hashd al-Watani” group, which is being trained in Bashiqa. This group mainly consists of Sunni Arabs from predominantly Sunni Mosul. There is speculation that Ankara, which has made its Sunni leanings in Iraq and Syria apparent over the past few years, is also being driven by sectarian motives. According to one claim, Ankara, supported by the by Nujaifi camp and by Barzani, is attempting to establish a Sunni sphere of influence in and around Mosul.

Hadi al-Ameri, head of the Shiite Badr group in Iraq, has vowed to fight Turkish troops if Ankara continues to deploy forces to Ninevah. “Violations of Iraqi territory will be responded to,” Ameri told students in a speech at Bagdad’s Al-Mustansiriya University.

Hakim al-Zamili, who heads the Iraqi parliament's security and defense committee, went further, calling for airstrikes against Turkish troops if they refused to leave Iraqi territory. Zamili also said they could ask for Russian military support against Turkey.

Meanwhile, Abadi claims that most of the oil IS is smuggling is being sent through Turkey, which meshes with the accusation Moscow has repeatedly underscored since the downing of one of its fighter jets by Turkey on Nov. 24.

So why is Baghdad angry if, as Ankara maintains, it gave the go-ahead for the deployment of Turkish troops in Bashiqa? Murat Yetkin, editor-in-chief of the Hurriyet Daily News and a prominent columnist for the daily Radikal, contends there could be a number of reasons.

“It could be related to the crisis between Russia and Turkey. It could also be due to Iran’s heavy influence over Baghdad,” wrote Yetkin in his Dec. 7 column. He went on to suggest that Baghdad might also be worried about the close ties developing between the al-Hashd al-Watani group and Turkey. “Another thing that comes to mind is the lack of coordination within the Iraqi administration. We have seen past examples where ministers from different sects withheld information from each other,” Yetkin said.

Meanwhile, many in Turkey also have doubts about Ankara’s motives and the wisdom of opting for a deployment at such a delicate moment. Among them is Ozturk Yilmaz, Turkey’s former consul general to Mosul who was held hostage for 101 days with 49 staff members after Mosul fell to IS in 2014.

“Assuming Mosul is cleared of IS with a ground operation, what will Turkey’s second step be? Who will control the region?” asked Yilmaz, now a deputy from the main opposition Republican People's Party, in an interview with Hurriyet.

“If Mosul falls to Kurdish hands, like Sinjar — and the Kurds have been waiting a long time to get hold of Mosul and Kirkuk — then we face another scenario,” he said. “In that case, the KRG’s borders will grow, and it will become a larger state. The PYD [Kurdish Democratic Union Party] in Syria will also control a large area. Does this mean we have prepared the ground for others to expand their lands?”

Yilmaz added, “I fail to understand what Turkey is trying to achieve. How can we read a foreign policy that does not know what its second and third steps are?”

The bottom line is that this development has left in its wake unanswered questions about Ankara’s motives and its ability to formulate coherent policies for Iraq and Syria that do not stir the cauldron and also avoid creating negative repercussions for Turkey.